Wikipedia is one of the hubs of Internet knowledge. The online encyclopedia receives more than 18 billion page views every month, which means that it exerts a huge influence on the way we think about our world and how we discuss every conceivable political and social issue. 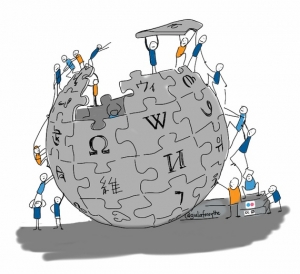 Incredibly, Wikipedia is entirely curated by a team of volunteer users who come from many different backgrounds—and, unsurprisingly, the pages have become sites of ideological warfare, with different sides trying to control the terms of debate.

Is that conflict productive? Does the input of a politically diverse group of curators and editors result in more biased information—or less? How do we know which Wikipedia articles are comprehensive and balanced and which are not?

You might expect that people who already agree with each other are able to work cohesively to create more accurate pages. But according to a new study, that’s not true. It finds that Wikipedia’s political, social issues, and science pages edited by a more politically diverse segment of editors ended up being higher quality.

In fact, many studies suggest that intellectual diversity can help teams produce higher-quality work, thanks to the different perspectives brought to bear on shared goals—and when we lack intellectual diversity, it makes it much easier for us to develop blind spots or even discriminate against colleagues with different views. There are online projects—like Wikipedia or the news site AllSides—that are trying to develop healthy practices around intellectual diversity in a society where that’s increasingly rare. These projects are becoming laboratories where scientists can test the conditions that foster exchange across political differences.

How do you determine quality of pages?

Wikipedia has internal quality metrics like comprehensiveness and readability that editors use to rate articles and allocate resources. “We kind of piggybacked on their efforts and use this tool for our purposes,” says Misha Teplitskiy, one of the researchers who performed the study and a postdoctoral fellow at the Laboratory for Innovation Science at Harvard University.

After taking account of Wikipedia’s own measure of quality, Teplitskiy and his colleagues measured the ideological alignments of individual Wikipedia editors by the number of contributions they made to either conservative or liberal articles. In fact, they found that the structure of Wikipedia necessitated cross-ideological collaboration:

If you want to edit whatever controversial topic, you really are forced to interact with whoever is already editing that topic. You can’t just start your own Wikipedia page for the conservative take on climate change or something, right? There’s already a climate change page. You’re gonna have to play with the folks that are already in that sandbox. And that’s of course very different from Twitter, etc., where there’s no limit, there’s no forcing mechanism to get people into one room for a particular topic.

But does this approach result in better pages? Yes. They found that more ideologically polarized teams of editors outperformed the homogenous ones, according to Wikipedia’s internal metrics. Their paper notes that the effect was greatest for political articles but also was seen in the other two issue areas. As polarization among editors rose, the odds of moving from lower- to higher-quality categories increased by a factor of almost 19 for political articles, and by about two for both social issues and science articles.

This isn’t the first study to find that heterogeneous groups can often come up with better solutions than homogenous groups. A recent study of professional video-game teams found that the more culturally diverse groups won more prize money. Diverse crowds often out-guess individuals. In the influential 2004 book The Wisdom of Crowds, James Surowiecki describes many studies and examples of groups solving problems better than individuals. For example, contestants on the hit game show Who Wants to Be a Millionaire? were more likely to win when they asked the audience to guess the weight of an ox, as opposed to phoning a single trusted friend.

As these thinkers argue, political and intellectual diversity can benefit a team by helping team members see flaws in their own ideas: If everybody agrees with you, it’s hard to see what you could possibly be missing. And lacking that diversity—just like lacking diversity in other dimensions—could create environments where discrimination occurs.

While Wikipedia might have embraced this kind of diversity, several studies have found that other institutions are moving in precisely the opposite direction.

What happens when diversity is missing

They found that while respondents had varied positions on the issues, they overwhelmingly identified as left-leaning. This is important because much of our polarization is based on self-identification with labels, rather than what we actually believe.

More recently, NYU psychologist Jonathan Haidt has noted that the political identifications of those who work in academia have become much more one-sided than they were in the recent past. In his recent book, The Coddling of the American Mind, he and co-author Greg Lukianoff argue that in the early 1990s liberal professors outnumbered conservative two-to-one, but that this ratio has shifted closer to five-to-one in recent years, with certain departments being even more lopsided.

Perhaps as a result, the general public has come to view higher education in a more polarized way, with liberals consistently approving of these institutions more than conservatives do. This trend risks undermining those institutions, as both sides start to evaluate them by political leaning rather than merit.

As the study of social psychology suggests, this can increase the risk of acts of discrimination against conservatives on campus, but also against institutions that conservatives may implicitly perceive as liberal.

In addition, we know that calamities have occurred when teams excluded or marginalized dissenting voices who could have pointed out the errors of their processes and conclusions. Examples range from Commodity Futures Trading Commission chair Brooksley Born trying to warn regulators about looming financial risk prior to the Great Recession to the intellectual consensus around the Iraq war, which was formed by a news media that mostly excluded anti-war voices.

In 2017, Germany’s Goethe Institute commissioned the Jerusalem-based journalist Antony Loewenstein to discuss the problem of ideological silos. “Filter bubbles in the mainstream media are one of the most dangerous aspects of the modern age because they reinforce the least risky positions,” he says.

Loewenstein, who reports primarily about foreign affairs, says that some ways to prevent filter bubbles would be “widening the range of voices and publications that are heard in the mainstream” and greater “financial support to alternative news sources.”

Unfortunately, contractions in the news industry have led to decreased competition, which may be further promoting the problem of a lack of intellectual diversity.

Trying to see all sides

As local newspapers have declined, however, we’ve seen more polarization of American communities, according to research released earlier this year.

While correlation isn’t causation, that study is buttressed by research published in 2014 that found increased competition between newspapers increased intellectual diversity. The study looked at newspapers during their golden years in the 20th century, when editorial boards were typically aligned with one of the two major parties.

Writing about their results two years later, the researchers note that in the period they studied:

The economic and political goals of media regulation were aligned: Competition for readers both lowered prices and enhanced political diversity, and policies that increased the number of papers and their incentives to differentiate politically paid a “double dividend,” increasing both traditional economic welfare and the diversity of political voices in the marketplace of ideas.

Promoting a healthier and competitive media is one way to promote intellectual diversity, but we also need to be mindful about doing so in our everyday lives, in our choice of media. Today, the website AllSides works to help people broaden their minds and consider the news and politics from points of view other than their own. Its founder, John Gable, was a long-time Republican Party staffer who later went to work on the Internet browser Netscape.

“We all had this great thought that the Internet would help us connect with each other,” he says of his Netscape days. But he was worried that the Internet would also “train us to discriminate against each other in new ways.” In retrospect, his concern was justified: Two decades later, we can see that filter bubbles and tribal clustering are a real problem in online spaces.

“It trains us to think in categories,” says Gable. “If you and I disagree on the environment, let’s say, it’s not just that you are wrong, but you must be evil because you’re one of them.”

In response, Gable worked with Joan Blades, a co-founder of the liberal organization MoveOn.org, to start AllSides seven years ago.

AllSides offers its readers a menu of news items alongside coverage from the left, right, and center. If, for instance, readers see a story about a congressional testimony, the website allows them to see the same event written up from multiple points of view.

It also features what’s called a “Red Blue dictionary,” where a reader can click on a topic see different views on the same terminology. For instance, the page on abortion explains how pro-choice Americans view abortion as a common medical procedure, while pro-life Americans view it as taking a human life. The pages often include discussion questions to facilitate nuanced political thinking about the topic.

All Sides also has set up the program MisMatch, which helps pair people of different perspectives to have a civil video conversation. The program connects classrooms across America, serving to pierce the filter bubbles that segregate us by partisan or political affiliations.

Gable sees his project as a way to pierce through the barriers segregating us from those who disagree, so that we can collaborate and more amicably come up with solutions to social problems:

The Internet right now . . . tends to only have us see people who are just like us, and it always tends to show us information that we already agree with. When we always see people just like us, and when we always hear opinions we agree with, two things happen to any of us. First, we become much much more extreme in our points of view. And, secondly, we become much less tolerant of any person or idea that’s different than us. And that’s ripping up the fabric of our society.

The research doesn’t just show that cooperation across divides can work—it also suggests that just throwing people together can have a negative impact. As social psychologists Lee de-Wit, Cameron Brick, and Sander van der Linden write in Greater Good, “Diversity won’t necessarily lead to harmony, since you’re more likely to encounter strong emotional and moral language that could trigger negative partisan reactions.” This is what fuels vicious sniping on social media, according to their studies.

Fortunately, projects like Wikipedia and AllSides suggest an alternative. At Wikipedia, opponents can come together in a structured way to accomplish a shared goal: accurate, readable pages, evaluated according to agreed-upon criteria. For its part, AllSides primes readers to see the value of many points of view. Of course, we tend to find it more soothing when everyone agrees with us. The path these projects lay out is the more troubling, stressful one. Is it worth it? This research to date suggests that the answer is yes.