When I was in my twenties I took my first ever college course in economics. I remember my professor explaining the field’s basic assumptions—that markets work best when everyone looks out for their own self interest, which is human nature anyway—and my initial reaction to that, which was basically, “What bulls—-!”  Needless to say, I had trouble getting through that class.

But now after reading Paul Zak’s newest book, The Moral Molecule: The Source of Love and Prosperity, I feel a bit of vindication. 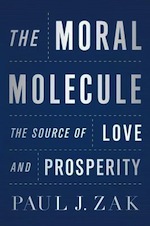 Zak, professor of economics and founding director of the Center for Neuroeconomics Studies at Claremont Graduate University, has studied trust in economic interactions and has come to a somewhat startling conclusion: that trust, not self-interest, is the basis of a well-functioning economic system. And, trust is mediated in large degree by the hormone oxytocin.

According to Zak, whenever someone experience trust from another—or even when we just witness acts of trust between two people—our bodies release oxytocin, a feel-good hormone that relaxes us, inspires warm feelings, and makes us act more generously. He hypothesizes that this internal reaction to oxytocin is what allowed early humans to trust others outside of their immediate social group long enough to mate, as it helped relax people’s defenses.

But even beyond sex, oxytocin plays an even bigger role in promoting trust in human interactions, because it can mediate a kind of cascade of virtuous behavior, where one act of trust stimulates oxyoticin release, which produces generosity, which inspires more trust, which stimulates oxytocin release, and so on. This is why Zak calls oxytocin “the moral molecule,” and why it can be important in the market, where virtuous behavior is necessary for business to run smoothly.

In early lab experiments, Zak studied the role of oxytocin in economic decision-making using trust games. In these games, all participants were given $10 and told that they could give all or part of their money to another, anonymous participant. Whatever amount was given away would immediately be tripled, and recipients of the bonus could then choose to share (or not share) profits with their anonymous donors. So, for example, if participant A gave participant B $5, participant B would have $25 total, and could choose to return some to A or keep it all. The more money A gives to B, the more trust A is demonstrating, and the bigger the potential for both to come out winners. But there’s always the possibility that B could just walk away with all of the profits.

When Zak initially ran this experiment, he found was that 90 percent of A’s would trust B with some money, and 95 percent of B’s would return money to A, with both increasing their profits. In addition, by measuring oxytocin levels in both A’s and B’s just before these transactions, Zak was able to show that the higher the oxytocin level in participant A’s blood, the greater the amount of money he or she would give to participant B, and the greater the amount of oxytocin in B’s blood, the more he or she would return to A.

In other words, it appears we are programmed through oxytocin to respond to generosity with generosity, and to trust with trust, showing that these factors influence economic decisions as much or more than self-interest.

In fact, Zak has shown that the level of trust in a society is the most powerful determinant of its prosperity. Being able to trust strangers and have that trust rewarded opens up possibilities for cooperation and exchanges that would otherwise not be viable, benefitting all involved.

Not only that, but trusting societies are also the happiest, according to Zak. That’s because when oxytocin is released into the blood, it acts upon the reward centers of the brain, making us feel happier and less stressed, which is good for our health, too. Oxytocin also stimulates empathic concern for others, strengthening Zak’s claim that it’s the neurochemical basis of morality.

In more recent studies, Zak has moved out of the lab and into the field, trying to get a handle on how oxytocin works in vivo. In one case, he took blood samples from people before and after attending a wedding—marriage being the ultimate act of trust—and found that oxytocin levels rose for everyone present, though not to the same degree. Instead, the level was dependent on factors like how close one felt to the bride or groom and the degree of stress one was under, showing that oxytocin responds to human bonds in more nuanced ways than simply turning us on or off.

In fact, this is one reason why Zak doesn’t advocate for dosing people with oxytocin willy nilly, even if it seems society could use more trust and generosity. He believes that oxytocin’s effects have evolved to be in balance with other hormones, like testosterone and cortisol (the stress hormone), in order to protect us in situations that demand more caution.

“The Moral Molecule works like a gyroscope, helping us maintain our balance between behavior based on trust, and behavior based on wariness and distrust. In this way oxytocin helps us navigate between the social benefits of openness—which are considerable—and the reasonable caution we need to avoid being taken for a ride,” he writes.

Still, Zak believes we can and should create situations where oxytocin naturally arises. He suggests hugging people frequently and finding ways to de-stress, since human contact stimulates oxytocin release and stress is one of the prime blockers of an oxytocin surge. In addition, he believes businesses, and even society in general, can pave the way for more oxytocin release—by passing laws or creating spaces where people have more face-to-face informal interactions, more exposure to diversity, less income disparity, and better education…things that promote trust.

Unfortunately, these suggestions look suspiciously like a progressive political platform, and this is where the book’s appeal starts to lesson somewhat. At one point, Zak refers to a study where he gave Democrats and Republicans oxytocin nasal sprays and asked how they felt about certain political proposals and members of both political parties. Democrats on oxytocin were more accepting of proposals and showed more warmth and positive regard toward members of both political parties than Democrats given a placebo; but Republicans on oxytocin didn’t have significantly different attitudes than those on placebos, remaining steadfastly untrusting of both government proposals and Democrats.

Zak tries to explain this result by writing that rigid thinking—like “all government is bad”—can interfere with oxytocin release; but that explanation seems a little too pat. Whatever the explanation, though, results from experiments like these just give us more reason to be cautious about prescribing oxytocin for enacting social change. Until we have more research on how it influences human behavior, even Zak—an oxytocin enthusiast—wouldn’t recommend putting it in the drinking water.

Very interesting article about trust and how our body reacts to it. I am defiantly buying this book.