Donald Trump’s core supporters seem willing to swallow increasingly absurd conspiracy theories — including the candidate’s insistence that a vast array of international forces are out to defeat him. It’s easy to mock their credulousness, but newly published research suggests that a specific psychological mechanism may be driving such beliefs.

It finds that a feeling of social exclusion is linked to belief in superstitions and conspiracy theories. And, as a wide range of commentators, including President Barack Obama, have noted, many of Trump’s voters see a nation they no longer recognize and feel left out. 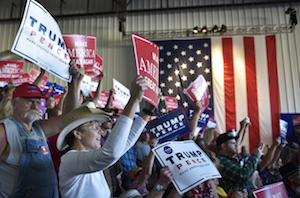 Social exclusion — the realization you have become cut off from either your circle of acquaintances, or the wider society — can be a source of intense discomfort. Princeton University psychologists Damaris Graeupner and Alin Coman argue it can send people on a search for meaning, which, in turn, leads some of them to accept discredited ideas.

They describe two studies in the Journal of Experimental Social Psychology. In the first, the participants — 199 adults recruited online — were asked to describe “a recent unpleasant event that involved interacting with one’s close friends.” They then indicated the degree to which the incident evoked 14 distinct emotions, including “exclusion.”

Participants then filled out a “meaning of life” questionnaire, in which they reported whether they have found, or are searching for, a purpose or mission for their existence. Finally, they indicated (on a one-to-seven scale) the degree to which they believed three conspiracy theories, including “pharmaceutical companies withhold cures for financial reasons” and “governments use messages below the level of awareness to influence people’s decisions.”

The researchers found that people who were reminded of a time when they felt like a social outcast were more likely to endorse conspiratorial beliefs. This, they add, was apparently driven by their search for meaning.

The second study, featuring 102 Princeton students, dealt not with the memory of social exclusion, but with an in-the-moment example of that disturbing feeling. Participants wrote a short essay, which — they were told — “would be given to the other two participants that were physically present in the room.” Those people “would rank who they would like to work with in a subsequent collaborative task.”

In fact, the students were randomly told that they had been selected or not selected (with members of a third group not getting word either way). They then took a test designed to measure their superstitious beliefs.

Once again, the researchers found higher levels of such beliefs among people who had just felt excluded. Graeupner and Coman believe these results help explain why so many conspiracy theories are “impervious to change.”

“Feeling socially excluded might lead one to endorse superstitious beliefs and conspiratorial ideas,” they write. “This endorsement, in turn, might lead to further exclusion from one’s social circle, and the cycle continues….Very often, the individual who experiences social exclusion then searches for like-minded individuals who further reinforce those beliefs, until they become entrenched.”

In other words, they find their own group where they feel they belong — albeit one largely untethered to reality. Sound familiar?

The implication of all this is that fostering an inclusive culture — which means finding ways for everyone to feel they are a part of society — could help in “limiting the spread and impact of conspiracy theories.” Given that social exclusion has also been shown to inspire racist beliefs, that work can’t begin soon enough.