Norman Frank first noticed that his wife Margie was having problems during a vacation to England in 2003. One day they stopped to watch a boat sail along a river, but soon afterwards Margie had completely forgotten seeing it, remembering instead that she’d only heard someone tell her about the boat.

Margie had been diagnosed with Alzheimer’s disease four years earlier. But until that day in England, she had shown few symptoms. The Franks, both 83 years old, had been taking full advantage of their retirement by traveling across the United States and visiting Europe. After their trip to England, however, Margie became more and more disoriented and confused. The couple has since curtailed travel and social activities. 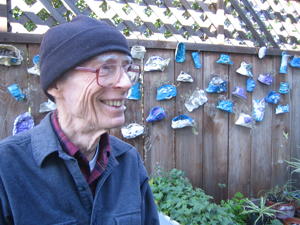 Norman Frank is the caretaker for his wife Margie, who suffers from Alzheimer's disease. "My biggest frustration comes from this accumulation of a lot of time spent being responsible," he says. © Matthew Wheeland

Today, the burden of everyday responsibilities has largely fallen on Norman. In addition to handling shopping and meals, Norman also takes care of Margie’s daily needs, such as dressing and bathing. Even going to the bathroom requires Norman’s help. For Norman, these tasks add up quickly, and can be overwhelming. “My biggest frustration,” he says, “comes from this accumulation of a lot of time spent being responsible.”

The Franks’ situation is hardly unique. There are roughly five million Alzheimer’s patients in the U.S., and as Baby Boomers age, experts predict this number will more than triple by 2050. Alzheimer’s patients live anywhere from eight to 20 years after the first onset of symptoms, and eventually reach the point of needing total, around-the-clock care. As a result, ever more spouses and children will have to care for a loved one afflicted with the disease, and watch that loved one slowly disappear before their eyes.

Researchers have long shown that these caregivers face significant health risks. A nationwide study of caregivers released last year by the National Alliance for Caregiving discovered that caregivers “find themselves in a downward spiral of health that worsens as a result of giving care.” A 1999 study by Richard Schulz and Scott Beach of the University of Pittsburgh found that elderly caregivers had a 63 percent higher mortality rate than their non-caregiving peers.

Experts say that caring for someone with Alzheimer’s can be especially demanding.

“Dementia caregiving is more difficult for the caregiver because the person isn’t often aware of how much help they need,” says Dolores Gallagher-Thompson, director of Stanford University’s Older Adult and Family Center. “As the disease progresses, they can’t even recognize the caregiver anymore, which can be a huge psychological burden and stress.”

Fortunately for today’s caregivers, and the millions more who will soon join them, the effects of caregiving don’t have to be so taxing. New research indicates that with the proper support, caregivers can make significant strides in their ability to care for their loved ones—and maintain their own mental health in the process. For instance, a study published last year by Mary Mittelman, a director of New York University’s Institute for Aging and Dementia, reported that providing caregivers with support groups and one-on-one counseling can delay their need to place an Alzheimer’s patient in a nursing facility by as much as a year-and-a-half.

Another study published last year, led by Schultz at the University of Pittsburgh, identified long-term benefits of giving caregivers this kind of support. As part of the study, caregivers met with counselors about a dozen times over the course of six months. The caregivers learned relaxation techniques and worked on ways to give better care, such as by learning how to identify and respond to the problem behaviors that come with Alzheimer’s disease.

Schultz and his colleagues were surprised to find that study participants not only benefited from the trainings almost immediately, but were more likely to accept their loved one’s passing as a positive change. “The study showed that things you do for caregivers while they’re still caregiving may carry over and benefit them afterwards,” says Schultz. “Anything you can do to ease the burden of caregiving before death also has benefits for easing bereavement and complications and grief after death.”

A range of new programs are putting these results to real-world use. By taking advantage of a bounty of new resources—training classes, counseling, and online and real-world support groups—caregivers can preserve their own mental and physical well-being while caring for a loved one. They’ll also be relieving the health care system of a substantial financial burden: According to a study published in the journal Health Affairs in 1999, the informal caregiving provided by family and friends in the U.S. saves nearly $200 billion dollars from national health care spending.

Among these new resources, the Savvy Caregiver Program offers help specifically to people caring for loved ones suffering from Alzheimer’s or other forms of dementia. Kenneth Hepburn, who is now associate dean for research at Emory University’s School of Nursing in Atlanta, developed the six-week training program while working at the University of Minnesota. He says it has two main objectives: “First, we want to help people realize they have a goal for doing this kind of work, to make them feel comfortable with it; second, to make people aware that although they may mostly see the losses brought on by the disease, they should also see what is still available to the person, and to work with that.”

Savvy Caregiver participants also benefit from the help they offer one another. The Alzheimer’s Association—a national health organization dedicated to finding prevention methods, treatments, and an eventual cure for Alzheimer’s—has recently begun offering the Savvy Caregiver Program to caregivers across the West. The first class that met in Palo Alto enjoyed the program so much that they self-organized a six-month reunion to catch up and continue to support each other.

Programs such as the Savvy Caregiver are designed to ease the stress of caregiving by giving caregivers an outlet to talk about their frustrations. “People need a safe place to express their ambivalence about caregiving,” says Donna Shemp, program director at the San Francisco-based Family Caregiver Alliance, one of the nation’s oldest caregiving resource centers. “It’s okay to be angry, sad, and impatient. It’s okay to not be a perfect caregiver. It’s okay to get help.”

The Family Caregiver Alliance (FCA) offers many classes—some similar to the Savvy Caregiver Program, some dealing with more specific challenges, from negotiating financial arrangements with lawyers to handling a family member who isn’t pulling his weight. The FCA also offers online support groups, telephone hotlines, and phone workshops, and maintains an extensive list of fact sheets on its website, caregiver.org. Shemp said the group surveys its clients every year to find out what they need most. And every year, she said, they get the same responses, in this order: “Information, emotional support, and respite.”

For respite help, there is a patchwork of resources across the country. For instance, caregivers in Northern California can turn to Alzheimer’s Services of the East Bay (ASEB). Where the FCA and the Alzheimer’s Association offer classes as well as perform research and publish studies on the disease, ASEB provides direct support to caregivers, primarily through their day-care program. Here, caregivers can drop their loved ones off for a day—or even a few hours—of relief. ASEB’s staff supervises as their clients play games, work on paintings or sculptures, or just have quiet time while their caregivers go to work, run long-delayed errands, or simply get some much needed downtime.

ASEB director Karen Grimsich says learning about clients’ cultures and personal histories has been key to making them happy. “Dementia takes a back seat—everyone here has it, so our job is to find out what makes them people. What do they love—is it art, music, humor?”

Micheal Pope, deputy director of ASEB, says that working with Alzheimer’s patients can also be eye-opening. In a region as diverse as the San Francisco Bay Area, she is inspired by how well her clients get along. “Alzheimer’s sufferers lack ‘judgment’—they don’t judge people on age or race or anything like that. They don’t say, ‘I’m an African-American from Oakland and you’re a Hawaiian Islander, so we can’t get along.’ They say, ‘I hear music and I want to dance.’”

When I first met them late last year, Norman and Margie Frank had only recently come to ASEB. Margie was spending two days a week at ASEB, and after just three weeks, the extra help in caring for his wife had made a big difference for Norman. His desk was no longer piled high. His to-do list, especially writing letters, had also gotten much shorter. Perhaps most importantly, relief from the daily responsibilities of full-time caregiving had helped him maintain a positive outlook on the future.

“We were married in 1954, so we’ve had about 50 very good years,” he said. “If we have a few years that are hardly challenging, I think we’re really quite fortunate.”