“Love thy neighbor” is preached from many a pulpit. But new research co-sponsored by the UC Berkeley Greater Good Science Center suggests that the highly religious are less motivated by compassion when helping a stranger than are atheists, agnostics, and less religious people.

In three experiments, social scientists found that compassion consistently drove less religious people to be more generous. For highly religious people, however, compassion was largely unrelated to how generous they were, according to the findings which are published in the most recent online issue of the journal Social Psychological and Personality Science.

The results challenge a widespread assumption that acts of generosity and charity are largely driven by feelings of empathy and compassion, researchers said. In the study, the link between compassion and generosity was found to be stronger for those who identified as being non-religious or less religious. 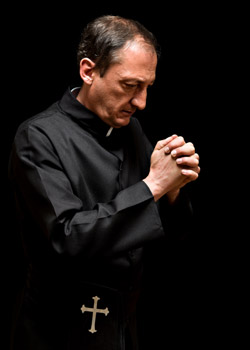 “Overall, we find that for less religious people, the strength of their emotional connection to another person is critical to whether they will help that person or not,” said UC Berkeley social psychologist Robb Willer, a co-author of the study and a member of the Faculty Board of the Greater Good Science Center (GGSC). “The more religious, on the other hand, may ground their generosity less in emotion, and more in other factors such as doctrine, a communal identity, or reputational concerns.”

Compassion is defined in the study as an emotion felt when people see the suffering of others which then motivates them to help, often at a personal risk or cost.

While the study examined the link between religion, compassion and generosity, it did not directly examine the reasons for why highly religious people are less compelled by compassion to help others. However, researchers hypothesize that deeply religious people may be more strongly guided by a sense of moral obligation than their more non-religious counterparts.

“We hypothesized that religion would change how compassion impacts generous behavior,” said study lead author and former GGSC fellow Laura Saslow, who conducted the research as a doctoral student at UC Berkeley.

Saslow, who is now a postdoctoral scholar at UC San Francisco, said she was inspired to examine this question after an altruistic, nonreligious friend lamented that he had only donated to earthquake recovery efforts in Haiti after watching an emotionally stirring video of a woman being saved from the rubble, not because of a logical understanding that help was needed.

“I was interested to find that this experience – an atheist being strongly influenced by his emotions to show generosity to strangers – was replicated in three large, systematic studies,” Saslow said.

In the first experiment, researchers analyzed data from a 2004 national survey of more than 1,300 American adults. Those who agreed with such statements as “When I see someone being taken advantage of, I feel kind of protective towards them” were also more inclined to show generosity in random acts of kindness, such as loaning out belongings and offering a seat on a crowded bus or train, researchers found.

When they looked into how much compassion motivated participants to be charitable in such ways as giving money or food to a homeless person, non-believers and those who rated low in religiosity came out ahead: “These findings indicate that although compassion is associated with pro-sociality among both less religious and more religious individuals, this relationship is particularly robust for less religious individuals,” the study found.

In the second experiment, 101 American adults watched one of two brief videos, a neutral video or a heartrending one, which showed portraits of children afflicted by poverty. Next, they were each given 10 “lab dollars” and directed to give any amount of that money to a stranger. The least religious participants appeared to be motivated by the emotionally charged video to give more of their money to a stranger.

“The compassion-inducing video had a big effect on their generosity,” Willer said. “But it did not significantly change the generosity of more religious participants.”

In the final experiment, more than 200 college students were asked to report how compassionate they felt at that moment. They then played “economic trust games” in which they were given money to share – or not – with a stranger. In one round, they were told that another person playing the game had given a portion of their money to them, and that they were free to reward them by giving back some of the money, which had since doubled in amount.

Those who scored low on the religiosity scale, and high on momentary compassion, were more inclined to share their winnings with strangers than other participants in the study.

“Overall, this research suggests that although less religious people tend to be less trusted in the U.S., when feeling compassionate, they may actually be more inclined to help their fellow citizens than more religious people,” Willer said.

In addition to Saslow and Willer, other co-authors of the study are UC Berkeley psychologists Dacher Keltner, Matthew Feinberg and Paul Piff; Katharine Clark at the University of Colorado, Boulder; and Sarina Saturn at Oregon State University.

The study was funded by grants from the Greater Good Science Center, UC Berkeley’s Center for the Economics and Demography of Aging, and the Metanexus Institute.

The concepts and the ideas of compassion and kindness are
not teachable or directable. However, ways to be
compassionate and kind can be guided through daily
excusions! It is through observation and practice that we, as
young children, learn to be compassionate. Rarely adults
“ACQUIRE” the skill to be compassionate if it is not already
embedded in them; therefore, no religious teaching or
workshops can give one that. The workshop can teach ways
to practice and the region can promote the goodness and
both - not able to turn an uncompassionate person into a
compassionate soul.  Look at how many people speak of
religion and speak in GOD’s name (not Christian
specifically) and practice otherwise?! That should serve as
our evidences!

[As I cannot access the study at Social
Psychological and Personality Science. I comment
only as regards the summary given by Yasmin
Anwar, a Media Relations Representative at UC
Berkeley.

I found this article somewhat overly assumptive
and lacking in specificity. For example,

1: “researchers hypothesize that deeply religious
people may be more strongly guided by a sense of
moral obligation than their more non-religious
counterparts.”
Q: did they hypothesize thusly before, during, or
after the results?

2: Regarding experiement one, “researchers
analyzed data from a 2004 national survey of more
than 1,300 American adults”
Q: what percentage of the 1300+ is religious, and
what percentage is “atheists, agnostics, and less
religious people.”
Q2: As distinct from atheist and agnostic, with
what specifics was the “less-religious” sub-
category determined?

3: “In the second experiment, 101 American adults
watched one of two brief videos…”
Q: As no specifics [total number of people
watching only the heart-rending video, and the
percentage of religious/non-religious in that
population] are given, how was the result
significant datum?