Before last December, few americans had heard of Jan Egeland. But after the Indian Ocean earthquake and tsunami afﬂicted millions of people, all eyes were on the humanitarian response to the disaster, and this was Egeland’s job. As the United Nations Under-Secretary-General for Humanitarian Affairs, he had to coordinate the international aid for the tsunami’s victims.

But what launched Egeland’s name into international headlines wasn’t just his work for the U.N., but an offhand comment he made the day after the tsunami struck. 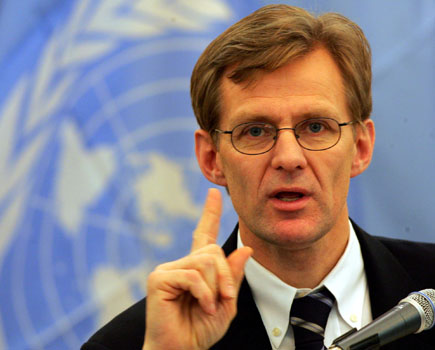 “It is beyond me why we are so stingy, really,” Egeland told reporters. “Christmastime should remind many Western countries at least how rich we have become. And if—actually, the foreign assistance of many countries is now 0.1 or 0.2 percent of their gross national income. I think that is stingy, really. I don’t think that is very generous.”

At the time, the United States had pledged just $15 million in tsunami relief; it has since upped its pledge to $950 million. But Egeland later said he was criticizing levels of foreign aid from developed nations in general, not the international response to the tsunami, or the response from the United States in particular.

It was too late. American ofﬁcials interpreted Egeland’s comments as a jab at American generosity and shot back that the U.S. government leads the world in foreign aid donations. President Bush charged that Egeland was “very misguided and ill informed.”

Except Egeland wasn’t misinformed. While the U.S. does lead the world in the total amount of money it gives to developing countries, it ranks last among developed nations in the percentage of its national income—the total value of all the goods and services it produces—that it devotes to foreign aid. That ﬁgure is .15 of one percent in the U.S., and the median among developed nations is about .3 of one percent. The country that gives the highest share of its national income, Egeland’s native Norway, still gives less than one percent.

Some critics responded to Egeland by saying that private donations from U.S. citizens and corporations make up for its shortcomings in public aid. “We open our wallets for private groups that are better at targeting money where it’s needed,” said an editorial in the Wall Street Journal. “When it comes to this sort of giving, nobody beats Americans.”

In fact, the U.S. ranks second in the percentage of its national income that goes toward private charitable dona¬tions, and the combined amount of public and private donations from the U.S. still places it in the middle of the international pack. But no matter how much individuals and corporations give each year, do these types of donations have the same practical effect or symbolic signiﬁcance as the aid that comes from governments?

Indeed, Egeland’s comments may have put a lot of people on the defensive, but they also raised some chal¬lenging questions. We might be giving billions of dollars each year in foreign development aid, but is that adequate? And why should we give more? Do we really have such a great collective moral obligation to strangers who live halfway around the world, especially when there are so many people in need in our own country? Social scientists have continu¬ally found that people are more likely to demonstrate altruism toward members of their own social group, with whom they share a sense of identity. While there might be some ﬂuctuations in the amount we give as a nation or as individuals, perhaps there’s a limit to how much empathy we should be expected to feel, and how much money we should be expected to give, to other nations.

These aren’t questions we usually like to confront, partly because their answers seem so elusive. It’s hard to say what would constitute enough foreign aid. No leader or nation is capable of ﬁxing the world’s inequities, so talking about them may seem only to induce guilt and resentment. But Egeland at least succeeded in instigating an international conversation that was long overdue. (He also arguably incited governments to do more for the tsunami victims: Donations shot up shortly after he made his controversial remarks, in what Egeland dubbed a display of “competitive compassion.”)

Egeland recently revisited some of these issues with Greater Good, discussing the morality, and the possible limits, of global altruism.

Greater Good: It seems hard enough to convince people to donate money to the poor in their own countries, or even their own neighborhoods. What responsibility do nations have to strangers halfway around the world, when so many of their own people are in distress?

Jan Egeland: The notion of meeting need regardless of where it occurs is one of the fundamental principles of humanitarianism. If the need is within their own borders, nations have a responsibility to respond to that; if beyond national borders, they have a similar obligation. I believe that the rich countries are growing ever richer, and the poor are falling further behind. I also believe that both governments and individuals in rich countries spend billions on essentially discretionary spending, including on luxuries, pure and simple. Given this, we have no excuse for not alleviating the often truly dire suffering of families caught in circumstances beyond their control.

GG: And are the wealthier nations of the world doing enough to meet these responsibilities to people in need?

JE: Deﬁnitely not. The range of non-military aid contributions varies tremendously, with the most generous nations giving over .8% of their national income and some giving as little as .15%. This means that rich countries are all keeping at least 99% for themselves.

GG: But after you implied in December that the wealthier nations of the world should have been donating more money to the tsunami relief effort, many public ofﬁcials and private citizens, especially in the United States, pointed to the large donations given by individuals. Many Americans were saying they were happy to donate money, but they wanted to control who received that money and how much they gave. Do you see a problem in shifting foreign aid from being the responsibility of governments to being the charge of private individuals?

JE: I obviously do not see a problem with the outpouring of generosity by individuals in response to the tsunami. In fact, I would welcome increased individual donations to other natural disasters and to complex emergencies, most of which are chronically underfunded, especially those in Africa.

However, individual or corporate funding can never be a substitute for multilateral humanitarian aid on the part of governments. For one thing, donations by individuals are most frequently in response to well-publicized disasters or crises, which inevitably attract the lion’s share of aid in the ﬁrst place. This, then, begs the question of who will help those in more forgotten, lower proﬁle crises, who are often the neediest in the world. Moreover, by its very nature, individual donation is ad hoc and cannot be counted on, nor will it redress geographic gaps or gaps in the types of supplies or services provided for the people in need.

Donor governments, however, annually dedicate a proportion of their resources for humanitarian activities. While I would like this proportion to increase in absolute terms, and to be contributed in a more timely fashion, at least we know that we can count on regularly receiving some part of what we need from governments.

GG: And is there a broader statement made by government aid, as opposed to private donations?

JE: Aid by governments represents a collective national response by all members of a country to those most in need in poor countries. So it therefore carries added weight as a transnational symbol of support and concern.

GG: There has been a growing body of research into what inspires people to help others in distress, even at a cost to themselves. One thing that seems clear is that people are far more likely to demonstrate altruism when they recognize a shared identity between themselves and the person in need. How can you marshal international support for people who aren’t bound by a common national or ethnic identity?

JE: I think human beings are virtually “hard-wired” to reach out a helping hand when we witness people in need. The ﬁrst responders are always those closest at hand—neighbors, townspeople, relatives, civic organizations, and local and national ofﬁcials. In complex emergencies like Sudan, people ﬂeeing violence turn to so-called “host communities,” themselves living in poverty, who take them in. Neighboring countries—again sometimes often desperately poor—also lend a hand, giving asylum to masses of refugees, as did both Iran and Pakistan for Afghan refugees for many years, as Chad is doing now for its Sudanese neighbors.

I do think proximity can inspire altruism, especially when we see suffering up close and ﬁrst hand—for example when people from developed countries ﬁnd themselves in developing countries or in countries in crisis. This can serve as a lifelong wake-up call for them. Moreover, in today’s world, with the advance of communications, we can see situations happening live on television, or through photographs instantly relayed through email or satellite transmission, and this immediate proximity to crisis brings the story home to people.

GG: But even with those technological advances, can we really expect levels of foreign aid to rise signiﬁcantly from their present levels? Perhaps it’s an indication that human beings are really just self-interested animals?

JE: I am optimistic about this for several reasons. For one thing, the United Nations Secretary-General has proposed the establishment of a fund for humanitarian emergencies that could jumpstart operations where needed. This would be a useful improvement on what we currently have, the Central Emergency Revolving Fund, which at $50 million is simply too small for responding to major crises.

Second, I am heartened by the recent news that the European Union has agreed on a proposal about how its members can meet the goal of pledging 0.7% of their gross national incomes on aid, thereby increasing their contributions by over $25 billion [in U.S. dollars] by 2010. This is not at all too much to ask.

I am also encouraged by the inspiring global generosity that we saw for the survivors of the tsunami. It showed humanity at its best, when life was at its worst for millions of people on the other side of this planet. In addition to the billions of dollars from individuals and corporations, a record number of governments also contributed. I refuse to believe that this response was a ﬂuke.

Finally, we need to recognize that giving to the less privileged gives us a sense of satisfaction. This Christmas, I witnessed many dedicated volunteers standing in the cold, ringing the bell for the Salvation Army. The passers-by who paused to put money in the kettle did not continue on their way with a look of regret, but with a smile.