The New York Times today reports on the growing movement to encourage unstructured, imaginative play—a movement supported by researchers and parents alike. Hilary Stout of the Times explains what these play advocates are up against:

For several years, studies and statistics have been mounting that suggest the culture of play in the United States is vanishing. Children spend far too much time in front of a screen, educators and parents lament — 7 hours 38 minutes a day on average, according to a survey by the Kaiser Family Foundation last year. And only one in five children live within walking distance (a half-mile) of a park or playground, according to a 2010 report by the federal Centers for Disease Control, making them even less inclined to frolic outdoors. 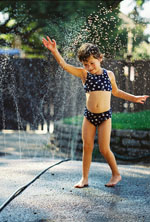 Much of the problem trickles down from adults—parents glued to their smartphones or fearful of having their child injured outside, schools that believe academic success requires more time behind a desk and less time on the playground.

But play proponents have been making the case that play provides a foundation for success later in life, socially and academically. We’ve reported on much of the research supporting this argument, including this excellent overview of the play research by David Elkind, Marjorie Taylor’s fascinating essay on the value of imaginary friends, and Jill Suttie’s article on parental anxiety around play.

For anyone wondering how they can start to rebuild a culture of play in their family, school, or community, the Times highlights some noteworthy efforts by parents and nonprofit groups like the Alliance for Childhood and KaBoom. (I was surprised to see no mention of the awesome work being done along these lines by the Bay Area-based nonprofit Playworks, the subject of a Times front page article last year.)

The movement certainly seems to be gaining momentum, even more than it had when we ran our series of articles on play three years ago. Stout reports that a group called Play for Tomorrow held “a giant play date” in Central Park last fall, called the Ultimate Block Party, complete with games like I Spy and lots of Play-Doh and sidewalk chalk. Organizers got tips from the National Science Foundation on the educational value behind the day’s activities—which seems like a nice marriage of science and practice, though I can’t help noting the irony in having academic experts weigh in on how to run a day devoted to free, unstructured, child-led play. The organizers expected 10,000 people to attend; they got 50,000.

And next up, there’ll be a conference at Clemson University in early February on the value of outdoor play. Stay tuned.