What should you do if a four-year-old boy tells you about a preschool bully like Sammy? Some sort of intervention might seem appropriate, perhaps a meeting with Sammy’s parents.

In this case, that was impossible: Sammy was imaginary. We learned about him when the little boy and his mother participated in our research investigating children’s relationships with imaginary companions. 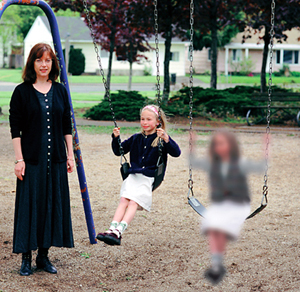 Marjorie Taylor (left) has been studying pretend play for the last two decades, talking with children about their imaginary friends. All the illustrations with this article were drawn by children she interviewed.

To answer these and other questions, we have observed children playing in our lab, conducted separate interviews with children and parents, compared their responses, and then resolved discrepancies with follow-up questions. Using this method, we have found that creating an imaginary companion is a relatively common activity in early childhood, and most imaginary companions are supportive, agreeable, loving, and fun additions to the family.

But a surprising number of children create imaginary companions with behaviors and idiosyncrasies that are bewildering and even threatening to their parents. Many children describe their imaginary companions as individuals who punch, bite, steal, tell lies, or engage in other forms of bad behavior.

Imaginary companions can be greedy (“she takes all my stuff”), destructive (“the first time I tried to make him turn a page, he ripped the page off”), arrogant (“he thinks he knows everything”), clingy (“she was a little annoying because she followed me around everywhere”), overbearing (“she’s a really mean friend, really bossy”), and aggressive (“sometime she gets angry at me and throws things at me”). They have to be monitored (“when he is bad I just lock the door”), told how to behave (“please don’t eat my daddy”), and admonished (“stop bothering me”).

With imaginary friends like these, many parents and teachers may wonder why children have them at all, or if these friends signal that something is wrong with a child.

But based on our years of observation, we believe imaginary companions play an important role in a child’s development, and their characteristics can speak volumes about the children who create them. Rather than being trivial or troubling, these companions can help children cultivate valuable skills—social, emotional, and creative—that have the potential to serve them well in their lives as adults.

Who has an imaginary companion? 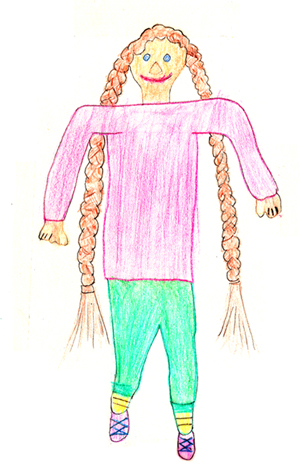 Our research shows that by the time children are seven years old, as many as two- thirds have had some experience with imaginary companions. This estimate includes children who have created a personality for a toy that serves as a special friend, as well as children who create an invisible friend. There is no “typical” imaginary companion; the animals and people who populate children’s fantasy lives come in all sizes, ages, genders, and species, including Martians, ghosts, angels, superheroes, and monsters, as well as invisible girls and boys and many types of animals.

For example, children with imaginary companions are especially likely to be able to focus their attention and get along well with other children. There is also some evidence that these children are particularly likely to do well on tests of verbal intelligence and creativity, a finding that will not surprise anyone who has heard a child’s detailed accounts of their friend’s appearance, behavior, and adventures.

And, despite stereotypes to the contrary, we have found that children with imaginary companions tend to be sociable: They are less shy than other children, more likely to smile and laugh in social situations, and they enjoy inter- acting with others.

To speculate about why this might be so, consider the following exchange between a child and his pretend friend named Paul. (The child refers to Paul as “boy” because he pretends to be Paul’s father.)
Child (referring to a pile of blocks falling over): “Oh man! Why did you do that, boy?”
Child (as Paul, in a high pitched voice): “I didn’t mean to.”
Child (in own voice): “Yeah, I know you didn’t.”

However, the vast majority of children are actually quite adept at making the distinction between fantasy and reality.

Children who participate in our research frequently make explicit and spontaneous references to the fantasy status of their imaginary companions. In the same session in which they have given long narratives about the personalities, physical appearances, family histories, and everyday activities of their pretend friends, they have often reminded us that their imaginary companions are not real (“I just made him up in my head,” “it’s really just because it’s pretend,” “he’s not in real life,” “I pretend they’re real, but they’re not,” “her is a fake animal”). It is almost as if the children are concerned that the adult interviewer might have lost track of what is real and what is pretend.

This is a very different picture from what we and other researchers have observed in random samples of children recruited from the general community. The children in our studies openly share details about imaginary companions, have no difficulty with the distinction between fantasy and reality, and do not seem to be unduly bothered when their imaginary companions are naughty or disobedient. In our view, then, creating an imaginary companion is a healthy type of pretend play. 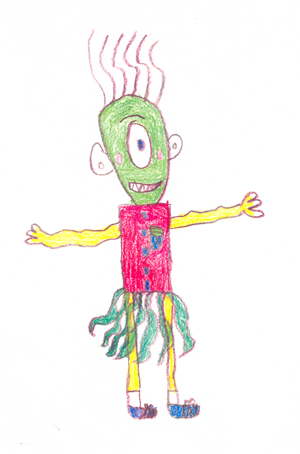 While it might be reassuring to learn that creating an imaginary companion is a healthy, relatively common form of play, what can specific kinds of pretend friends tell us about a particular child? Why would a child choose to have a pretend friend who is mean, bossy, aggressive, or frightening?

The research on such questions is limited, but the observations of preschool teachers, developmental psychologists, and child clinicians—notably Vivian Paley, Inge Bretherton, and Dorothy and Jerome Singer—suggest some possible answers. These authors emphasize the important role of pretend play in how children develop their understanding of emotions. In their pretend play, children explore the real-life themes and challenges that are important to them. It’s a child’s way of mulling things over. The imaginary friend provides an outlet for thinking about matters that catch the child’s attention, so there are often parallels between imaginary events involving the friend and the child’s real-life concerns.

Many children are intrigued, even preoccupied, with notions of independence and rule breaking. When playing with an imaginary friend, they can explore what it means to be disobedient and think through the consequences. This doesn’t mean the child will emulate these behaviors. In fact, it might even provide parents with helpful opportunities for discussion. If the imaginary friend bites, maybe the child has observed biting at preschool or elsewhere. A parent might learn more by asking if there is someone the imaginary companion wants to bite. Or perhaps the child simply finds it exciting to have an imaginary companion who has to be chastised and disciplined, enabling the child to assume an adult role. (“When they get in trouble, I don’t like it, but I do like it sort of.”)

The narratives that children relate about their friends reveal that imaginary companions who are mean, naughty, or argumentative can also be loyal and fun. The bad behavior might be striking to a parent, but it is not the whole story. One child told us about Freddy French Fries, who although mischievous and annoying, cheered up the child and made him laugh. A child who has described the argumentative Elfie Welfie as “kind of like a terrorist” also enjoyed long chats on the phone with Elfie Welfie, discussing that imaginary companion’s preference for tie-dye clothes and her job as a veterinarian.

Even when imaginary companions start out as one-dimensional characters, they often evolve, as children modify them to serve a variety of functions. They are convenient scapegoats, tools for negotiation and manipulation, vehicles for storytelling, boosters of confidence and self-esteem, safe audiences for one’s secrets, and sources of amusement. A child can feel safer disclosing his fear of going down the bathtub drain if he projects it onto a cowardly invisible friend. A child can walk confidently past a scary dog when there is an invisible tiger at her side.

What happens to the children who create imaginary companions when they get older? Do they become happier, more successful adults? Here again the research evidence is limited, but studies by psychologists Robert Kavanaugh, Charles Schaefer, and others show that young adults and adolescents who report having had childhood imaginary companions tend to score higher on tests of literary creativity and on scales used to measure openness to new experiences.

Given these results, it is perhaps not surprising that one of us (Marjorie Taylor), in collaboration with psychologists Sara Hodges and Adele Kohanyi, has found that adult fiction writers often report having had childhood imaginary companions. This research also suggests that many of these authors developed personal relationships with the characters in their novels and had imagined conversations with them. More often than not, the fictional characters seemed to the authors to have independent thoughts, words, desires, and actions—in other words, minds and wills of their own. Some authors even experienced their characters dictating the events in their novel or rebelling against the author’s vision of the story. In the authors’ accounts, these characters reminded us of imaginary companions.
We have also interviewed hundreds of other adults about their childhood imaginary friends. Of course, memories about the details of their imaginary companions often fade with time. But many adults could describe the functions they believe their imaginary friends served:

• Racqui was protective, although mischievous. His job was to be my guardian. … He never left my left shoulder where he stood.
• I could always talk to her and she wouldn’t say it was wrong.
• [The Giant Moths] were comforting individuals who could mend things that were broken and dispense with life’s difficulties by use of magic devices—magic hair dryers, magic carpets, etc.—accompanied by a special chant, which I can sing to this day.

Our research with adults and our work with children suggest that, over time, friendships with imaginary companions, just like those with real people, can evolve into complex and multi-faceted relationships. Pretend friends might originate because of a child’s particular interest or need, but then the initial reason for the friendship gets lost in the mix of functions that the friend comes to assume. Real friends provide love and support, serve as sounding boards, can be provocative, challenging, neglectful or infuriating—but ultimately, they enrich our lives. Imaginary friendships are not so very different.