By the time I was 11 years old, I’d incurred my fair share of childhood injuries. I’d fallen from my bike and scraped my face, stepped on a rusty nail in the woodpile behind our house, and broken my arm while roller skating. My parents did not encourage any of these injuries, nor approve of them. But they left me alone to play, most of the time, and my explorations inevitably resulted in the occasional trip to the hospital.

Nor were my parents especially concerned about trying to make my free time educational. They didn’t worry that four consecutive hours of TV would warp my mind or diminish my reading skills. They never pushed me to play chess or other strategic games, nor did they join me in playing tag or hide and seek, and I didn’t expect them to. Parents were supposed to be inside—working, cooking, cleaning, fixing stuff—and kids were supposed to be outside … being kids. 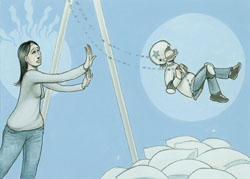 Not anymore. As the parent of my own seven- and 11-year-old boys, I am more apt to hover over them, worrying about their safety and how they are using their play time, than my parents ever were. And I’m not alone: Many of my parent friends share my anxiety. These days one is more likely to see children on organized “play dates” arranged and supervised by parents, or playing an adult-organized team sport, than to see them involved in spontaneous play with neighborhood kids.

We’re afraid to let our kids play outside unsupervised because something could happen to them. According to the Centers for Disease Control and Prevention, “concerns about safety have limited the time and areas in which children are allowed to play outside,” and have contributed to a decrease in overall physical activity among children. Journalist Richard Louv bemoans this trend in his 2006 book, Last Child in the Woods: Saving our Children from Nature-Deficit Disorder. “Fear is the most potent force that prevents parents from allowing their children the freedom they themselves enjoyed when they were young,” he writes. “Fear of traffic, of crime, of stranger-danger—and of nature itself.” In short, TV can seem a whole lot safer than an empty lot or busy street corner.

“There is this idea that every child’s experience must come with a health warning because every aspect of their life carries a potential risk,” says Frank Furedi, a sociologist at the University of Kent in England and the author of Paranoid Parenting. Parents are afraid to let their children confront the world on their own, he adds, because they have a preconceived notion that it’s a dangerous place, even more so in our post-9/11 world.

Though statistics show that criminal activity is down in many communities and there is reportedly no more danger from crime today than there was 40 years ago, those facts don’t seem to make much difference to parents, myself included. Despite my own childhood experiences—or perhaps because of them—I still find myself regularly peeking out of the front window to make sure my kids are alright. Yes, the girl who once broke her arm roller skating now anxiously keeps an eye on her own kids, and media reports of the rare childhood abduction, freak accident, or terrorist attack just feed the flames. 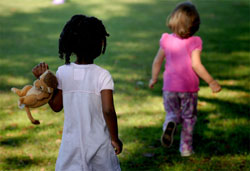 But there is another reason parents manage their kids’ play: We’re not just nervous about what could happen to them while they’re playing; we’re also anxious about whether they’re playing in the right way—that is to say, in a way that will nurture their intellectual growth. The pressures to succeed in our society have become all too real for many, and parents, rightly or wrongly, fear to let their children fall behind the curve. Some parents believe that if they don’t start early enough with stimulating toys, their children are doomed to do poorly in school, maybe even in life. Furedi argues that many parenting books capitalize on this fear. “Parents have lost confidence in their ability to nurture their own children,” he says. “Now they look to experts.”

I confess: I was one of those parents. When I was pregnant with my older son, Michael, I didn’t have friends with kids or other parent role models nearby. So I turned to books, some of which told me I should talk to Michael from the time he was the size of a rice kernel onward. I talked, I sang—as did my husband, Don—and we played Mozart for Mothers at night before bed. When Michael was born, I read several books on childrearing—Touch Points by Terry Brazelton and What to Expect the First Year by Arlene Eisenberg—looking for guidance on the right way to breastfeed, the right way to potty train, and, yes, the right way to play with my child. Don and I invested a small fortune in black-and-white toys and dangled them in front of Michael at any opportunity to stimulate his brain.

As he got older, I’d lie on the floor and play pretend games with him, put on puppet shows, draw, sing, dance, and make things with Play-Doh. As soon as he could walk, we’d go to the park and I’d push him on swings, help him down the slides, and coerce him into playing with the other kids. I read about crafts for young children and fumbled through a few token projects. I thought I was being a “good mother,” that all our adult-child interaction would stimulate his intellectual and social development.

But to be honest, playing with my son was often boring for me, and apparently I am not alone. According to Princeton psychologist Daniel Kahneman, parents rate the time they spend playing with their children as being about as much fun as doing housework. No wonder I felt envious of Don when he dressed for the office and left me to care for Michael, and looked forward, guiltily, to the times I could escape to work of my own. But shouldn’t I have tolerated the boredom and continued my ruse of merry play for Michael’s sake?

Not according to David Lancy, an anthropologist at Utah State University. He argues that child-parent play had been virtually unheard of throughout most of human history, and even now, about three-fourths of the world’s population would think it odd for a parent to get on the floor to play with her children. “We don’t see children around the world playing with their parents,” he says. “Are they handicapped by that? If so, we’d have to say three-quarters of the world’s children are handicapped.”

Play is important and it is universal, says Lancy, but we need not be so obsessed with playing with our kids. This obsession might even be harmful if it induces guilt in parents who can’t commit to that kind of intense interaction. Also, parents may overdo it, overprotecting their kids and monopolizing their time. “Kids need to learn how to manage on their own, entertain themselves, learn how to get along with other children,” argues Lancy.

Lancy’s opinion is backed up by a recent report by Kenneth Ginsberg, an adolescent specialist at the University of Pennsylvania’s School of Medicine. In his report, published last year in the journal Pediatrics, the journal of the American Academy of Pediatrics, Ginsberg finds that it is child-driven play, not adult-driven play, that has the greatest benefits to children because it contributes to “cognitive, physical, social, and emotional well-being.” Based on his research, he believes that undirected play helps children “learn how to work in groups, to share, to negotiate, to resolve conflicts, and to learn self-advocacy skills.”

So, what is a parent’s role? To butt out, apparently.

But things are different when your kids are young, says Ross Parke, a psychologist at the University of California, Riverside, and the director of Riverside’s Center for Family Studies. Parke says there are important reasons for parents to play with their kids when they are babies and toddlers, especially in our culture.

“There isn’t a social structure here that supports aunts and older siblings playing with young kids, like there is in some other cultures,” he says. “In our culture, it’s the parents who teach kids how to play.” His research on parent-child play in babies has shown that play can be educational and help teach babies how to manage their emotions.

For example, parents, especially mothers, use repetitive phrases with their babies to teach the names and physical properties—sound, color, and shape—of objects in their environment. They also model behaviors like taking turns, not getting too upset, and communicating. “Babies learn to read their parents’ cues and to use their own emotional signaling system, like facial expressions and sounds, to alert parents to their needs,” says Parke. This early learning gives kids a platform from which to function later, in a less forgiving world, and kids who have those skills tend to do better in school and have fewer social problems with their peers.

Still, Parke believes you can overdo it. “Parents don’t have to play with their kids eight hours a day,” he says, “and it’s not good for kids to have a grumpy, depressed mom at home playing with them, or a parent who works eight hours a day and comes home extremely stressed from work” but still plays out of a grim sense of duty. He believes the emotional state of parents is far more important to their kids’ development than the amount of time parents play with their kids. He also says that as kids get older—maybe three to four years old—they should be encouraged to play more independently and to form new play relationships, especially with other kids. In other words, even he believes there is a point when parents need to cool it.

And so I have. Now that my younger son, David, is seven years old, I leave him alone to play, much more so than I did with his older brother. Yes, I’ll play the occasional foosball game or round of chess, if requested. But, otherwise, he’s on his own. I also try to protect him and Michael from the ravages of multiple after-school activities and play dates. I’m less successful at that, but I have made progress. Just last week I talked Michael out of participating in winter soccer—a three-days-per-week commitment—after first convincing myself that I was not ruining his social life or physical health.

Instead, he will spend his winter days writing comics, drawing maps, and, yes, occasionally playing around on the computer. If I can kick him and his brother out of the house for a quick game of tag or a walk to a neighbor’s house to see if their kids can play, I will consider it a minor achievement in the annals of parenting.

Yes, I’ve learned to let go … some. Not as much as my own parents did—my anxiety is far from dead—but enough to stop hovering and let my kids fall down from time to time. Of course, I still cringe when they get a skinned knee or a bruised forehead, and I worry about them having too much screen time. But I believe the benefits they gain from having more freedom and developing self-reliance outweigh the costs—as long as they keep the hospital trips to a minimum.