“Work consists of whatever a body is obliged to do, and play consists of whatever a body is not obliged to do,” writes Mark Twain in The Adventures of Tom Sawyer, a statement that still stands as the simplest and truest definition of play. But throughout the history of childhood in America, adults have used play as a means of guiding the young—and thus turned it into a kind of work for children. While the overscheduled, overprotected child might seem like a distinctly modern problem, it reflects a tension that goes back centuries. In fact, adults have always tried to colonize children’s play for their own moral, educational, and commercial ends.

However, children themselves, and a few of their allies, have had a different agenda. Children have always learned how to inhabit two worlds, the one they revealed to their elders and the one they cultivated for themselves. Even in the face of adult interference, they have continued to find joy in play. 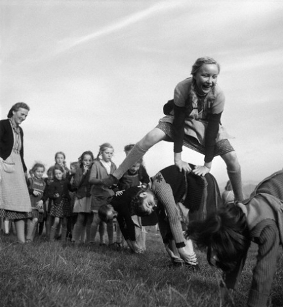 Until the 19th century, children operated under strict pressures to be subservient to parents and to God, and play was considered “the Devil’s workshop.” To youngsters, however, the Devil’s workshop meant fun and recreation. In his autobiographical novel A Boy’s Town, William Dean Howells described the duality of his youth in the early 19th century. In one half of his life, he was a dutiful and responsible son. But in “the other half,” he “swam, and fished, and hunted, and ran races, and played tops and marbles, and squabbled and scuffed in the Boys’ Town.”

Late in the 19th century, the American toy industry began mass-producing dolls, bicycles, board games, and other items formerly imported from Europe, giving kids a greater variety of commercial playthings. Still, a child’s play often involved the appropriation and transformation of everyday objects. John Albee summed this habit up best when he wrote, “All movable objects are playthings to [a child]. He makes them also, like the Creator, out of nothing; if he wants a horse, he has one in an instant by straddling a stick or tying a string to a companion.”

The period between 1900 and roughly 1950 marked a much more highly organized adult invasion of childhood than in the past. A relentless phalanx of parents, teachers, academics, and social welfare professionals created programs and institutions to ensure that children’s newly appreciated toys and play interests would be functional, healthy, and safe. The 1930 White House Conference on Child Health and Protection articulated a very 20th-century view when it declared that play was every child’s right, but also that “with the young child, his work is his play and his play is his work.” The intention was clear: Play was integral to childhood, but because play, like work, needed to be productive, its content was an adult responsibility.

Somewhat paradoxically, this period marks children’s most successful, though temporary, assertion of independence. Children’s responsibilities in the family economy—once so important in pre-modern, rural society—diminished as American society urbanized and industrialized. A declining birth rate reduced the demands on older children to care for younger siblings. And child-labor laws removed the young from the rural and industrial labor forces. As a result of these developments, children had more time and opportunities for unstructured play with their peers.

In 1955, the history of children’s play crossed a major watershed. That year, ABC began broadcasting The Mickey Mouse Club, the first daily TV program produced exclusively for children and featuring all-child (except one) performers. More importantly, one of the show’s sponsors, the Mattel Toy Company, began marketing toys not just around Christmas, but every day of the year. Daily commercials helped Mattel sales exceed all expectations and ushered in a new era of playing with things rather than playing with others.

Yet studies showed that when kids received a commercial toy, usually they’d play with it for only a short while. Before long, they’d rebel against these toys by creating their own styles of amusement. They invented their own rules for a board game, took miniature people out of a doll house or action game and put them into toy vehicles, or climbed up instead of gliding down a playground slide. These subversions—subversions that continue today—gave children at least some measure of control over their play in an environment overseen by nearby adults and distant marketers.

Childhood will always consist of secret, seemingly trivial diversions. “When we were kids, we had the sense to keep these things to ourselves,” writes humorist Robert Paul Smith. “We didn’t go around asking grownups questions about them. They obviously didn’t know.” Perhaps Smith is being overly sentimental, but his insight, just like that of William Dean Howells a century earlier, invokes something often overlooked about pre-adolescent childhood.

In our contemporary society, where parents and other anxious adults agonize over how to keep children safe and entertained, we need to learn from the past that youngsters crave and deserve a chance to enjoy being young. Play, not work, will always remain the essence of childhood.