Significant changes have been taking place within the institution of marriage over the last couple of decades. People are getting married later. More people are actively choosing not to get married. It is more common for people to have children without getting married. 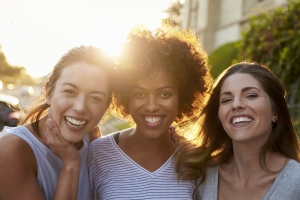 But how is this affecting our well-being?

To start to examine that question, a recent study in Applied Research in Quality of Life compared the behaviors and the happiness of married and unmarried people. It found that unmarried people have a unique advantage: They are more active socially, which means they’re sometimes even happier than their married counterparts.

Researcher Elyakim Kislev looked at surveys administered in 32 European countries between 2002 and 2016. People reported on their marital status, as well as their social capital—the amount of social activities and social interactions they engaged in. In the survey, social interactions included meeting socially with friends, relatives, or work colleagues. They also reported on how happy they were on a scale from 1 to 10.

Unsurprisingly, Kislev found that unmarried people—including those who are divorced, widowed, or never married—tend to have more social interactions with friends, relatives, and colleagues than married people.

He also found that the more social interactions people engage in, the happier they are—even more so for single people than married people.

For unmarried individuals, in other words, social capital may provide a source of support and belonging that can replace—and sometimes overshoot—the emotional benefits of having a spouse.

There were also some interesting differences between groups of individuals. Whether people were divorced, never married, or widowed, those who participated in more formal social activities (e.g., club meetings and church activities) were similarly happier. But casually interacting with friends, neighbors, and colleagues was much more important to the happiness of divorced individuals compared to the never-married or widowed. For divorcees, making time to connect with close others seems particularly important as they overcome their lost relationship, possibly because it helps them push past the stigma that surrounds divorce.

Overall, if you’re going to remain single, or you suddenly find yourself single, this study suggests that your social network is key to your well-being. This is true for everyone, but it’s especially true for those who don’t have the support of a partner.

While these findings are thought-provoking, it’s possible that some of them are unique to Europe. European countries tend to have a larger social safety net and better work-life balance, which may create some differences in the way Europeans experience social connection. For example, more time away from work likely means more opportunities for social interactions, making them a more central feature of daily life—and thus more important to happiness.

Marriage and romantic relationships are evolving. Since this part of our lives plays a huge role in the human experience, it is important for us to understand the best way to maximize our well-being in the context of any relationship status. This study is a good reminder that, for some, the single life can be just as viable a road to the good life.