Settling is an ugly, depressing word. Few people would suggest outright that you should settle for less than you want and deserve in a relationship. Even Lori Gottlieb, author of Marry Him: The Case for Settling for Mr. Good Enough, disapproved of the use of the word in her book title, a decision she said was made by her publisher.

But the pressure to settle can be very real, even if it is not communicated explicitly. People who are single after a certain age may be seen as “too picky” and urged to lower their standards. Singles are also likely to face social stigma due to their solo status, a phenomenon psychologist Bella DePaulo has called “singlism.” 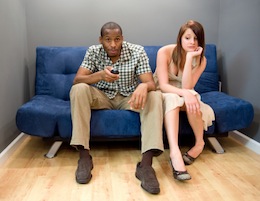 From our earliest days, we learn that our worth is tied up in our ability to find a mate; that marriage marks the passage into mature adulthood and is our most important adult relationship; and that we are not complete until we find our other half. And then there is the issue of our “biological clocks,” an imperative which recent research suggests affects men too.

It’s no wonder that people feel rushed to settle down before they are ready, or before they find the right match. If you have ever found yourself grappling with the question of whether it’s better to be alone, or to settle—which Gottlieb calls “one of the most complicated, painful, and pervasive dilemmas many single [people] are forced to grapple with”—read on.

Here are four science-backed reasons why you should consider holding out for a relationship that makes you truly happy.

1. Fear of being alone can skew your priorities.

A recent set of studies found that people who were afraid of being single—those who agreed with statements like, “I feel it is close to being too late for me to find the love of my life,” and, “As I get older, it will be harder and harder to find someone”—were more likely to prioritize being in a relationship over the quality of that relationship or a potential partner. In a longitudinal study, those who feared being single were less likely to end a dissatisfying relationship, and in a mock online dating study, such individuals were more likely to express interest in dating someone whose online profile included callous statements like, “I love what I do, so I need someone who respects that and is willing to take the back seat when necessary.”

Could it be that people who are afraid of being single are happier in lower-quality relationships because of their lower standards—that for them, any relationship is better than none at all?

Not likely. The researchers found that fearful participants in bad relationships were just as depressed and lonely as fearful participants who were single. Given the importance of social connection to our well-being, it is understandable that we seek out intimate relationships, but when fear of being alone drives our romantic decisions, it can lead us to exercise poor judgment and to choose relationships that are unlikely to last, that make us depressed, or even leave us vulnerable to abuse. If we take the “musical chairs” approach—“When you take a seat, any seat, just so you’re not left standing alone,” Gottlieb writes—we may miss critical warning signs that a potential partner is bad news.’

2. Being single has its benefits.

As DePaulo and colleagues’ research has consistently shown, the downsides of being single are compounded by the stigma surrounding it: Singles are inaccurately assumed to be immature, maladjusted, and selfish, and they even face certain forms of discrimination, such as being more likely to have a rental application denied in favor of a married couple. In reality, however, single people may be less self-centered and more giving than married and cohabitating couples: studies show that they are more likely to help out friends, family members, and ailing parents.

Debunking harmful myths like these can help us become more comfortable with and accepting of singlehood in ourselves and others, whether it is a temporary state or a life choice. Being single is an opportunity to build strong friendships, devote yourself to activities and causes that you’re passionate about, and develop a sense of self-worth and identity that is not attached to a romantic partner’s love and approval.

These experiences will serve you well if and when you find yourself in a relationship: If you feel satisfied in your life independent of your partner, you may be less likely to have the unrealistic expectation that your partner can and should meet all your needs, an expectation that historian and marriage expert Stephanie Coontz argues can erode a relationship over time.

3. The possibility of finding true love may be worth the risk of not finding it.

Settling is the safe bet, whereas holding out is a gamble. There is a reasonable chance that you won’t find true love. But the payoff is so much bigger. For every story you hear about someone who was too picky and ended up alone and miserable, there is another story about someone who stuck to their guns (despite harassment from friends and family) and ultimately found someone amazing who made the wait more than worth it.

When it comes to economic (and other) decision making, psychologists Daniel Kahneman and Amos Tversky have famously demonstrated that we are not always rational. One type of bias, loss aversion, describes our tendency to be more sensitive to losses than gains, even if the amount is the same. Losing $100 feels worse than gaining $100 feels good, and we’d rather avoid a $5 surcharge than gain a $5 discount. We may also be biased toward avoiding loss when it comes to romantic relationships, choosing not to let go of a mediocre relationship even if that would open the possibility of gaining a much happier one.

Loss aversion is a close cousin of risk aversion, which involves preferring a safer bet with a lower payoff to a riskier bet with a higher payoff. Risk aversion may at times be adaptive when it comes to investing and managing your finances, but it’s not necessarily adaptive when it comes to other areas of life, such as pursuing a dream career or looking for a romantic partner. Would you rather meet the love of your life at age 40 and spend 50 wonderful years with them, or be stuck with someone you don’t really connect with for your entire adult life? If you’d prefer the former, then it is probably worth the risk of holding out rather than settling.

Another cognitive bias that could lead to settling is the sunk-cost fallacy, which involves making a
decision based on what you have previously (and irrecoverably) invested in something, like going to see an outdoor concert that you already paid for even though its cold and rainy and you’re sick. We forget that even though we already paid for the ticket, we still have a choice: go to the concert and get even sicker, or stay home and rest: either way we incurred the cost of the concert ticket and have to accept that loss. Settling for an unhappy relationship because you’ve already invested a lot in it is like going to the concert even though you’re sick, or continuing to invest in a company that is doomed to fail. Loss is inevitable in these cases; it’s just a matter of whether you get out now and lose less, or stay invested and risk an even greater loss.

4. Accepting a person’s flaws does not mean having to settle for them.

Gottlieb does make a compelling argument that people are sometimes too perfectionistic about the qualities they want in a partner and as a consequence reject potentially great people for superficial reasons (like not being tall enough) that will not prove to be what matter in the long run (like
kindness). “Settling” for someone who is not as handsome or talented as Brad Pitt therefore may not be such a bad thing.

But when you fall in love with someone, accepting their shortcomings doesn’t feel like settling. In fact, one of the hallmarks of a happy relationship is our tendency to idealize our partners and even see their vices as virtues. Rather than picking apart a person’s negative and positive qualities, we should look at the gestalt, the big picture of who they are as a person and how we feel when we are with them. If the relationship feels right as a whole and the important bases are covered (e.g., you share important values), then there is nothing that needs to be settled for.

And who knows, you may actually come to believe that your husband is more handsome and talented than Brad Pitt.