Husbands and wives can drive each other crazy as they age, but a new study suggests marriage may actually protect them from a decline in happiness over time.

In the study, now published online by the Journal of Research in Personality, researchers from Michigan State University used data from an annual British survey to examine how major life events, including marriage, childbirth, and widowhood, influence people’s satisfaction with their lives in the short- and long-term. They also assessed the role personality plays in determining how people react and adapt to these events. 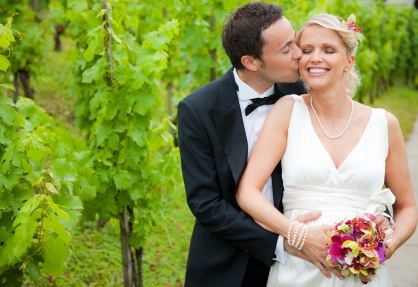 The survey involved yearly interviews with more than 10,000 adults in Great Britain from 1991 to 2008, asking them to rate how dissatisfied or satisfied they were with their lives. Out of this group, the researchers zeroed in on participants who got married for the first time, became parents for the first time, were widowed, or lost their job during the years of the study. They compared members of each of these four groups with people with similar demographic characteristics who didn’t experience that big event in their lives.

The researchers found that people who got married for the first time and stayed married reported increased happiness around the time of their marriage, though in the long run their levels of life satisfaction returned to close to what they were beforehand.

The researchers found no evidence that people who got married were more or less happy before marriage than people who stayed single. However, when the researchers compared the married participants with people of roughly the same age who remained single, they found that the single people showed steeper drops in happiness over time.

Past research has found that people in their 20s and 30s report being the least happy of any decade, and fewer are in long-term relationships. So this study’s results suggest that being in an enduring relationship like a marriage safeguards people against the declines in happiness that come with age, says Stevie Yap, a professor of psychology at Michigan State and the study’s lead author.

“Marriage is a protective factor against this gradual decline in well-being that you see in younger adults,” he says. “So it doesn’t make you any happier than you were prior to marriage, but it seems to protect against the decline of your happiness that would have been if you didn’t get married.”

People who became parents for the first time also reported elevated levels of happiness around that event, but over time their happiness levels returned to close to what they were before they became parents. However, the researchers did not find that becoming a parent for the first time was likely to protect peoples’ happiness in the same way that getting married might, despite the fact that childbirth—like marriage—is viewed as a positive major life event, says Yap.

People who lost their spouses or lost their jobs, on the other hand, experienced a long-term decline in life satisfaction—they didn’t seem to adapt to their change in circumstance and bounce back.

However, the researchers note that people who became widowed—whose average age was close to 80—reported higher levels of life satisfaction before they lost their spouse than other participants did before their life event, whether it was marriage, childbirth, or unemployment. This seems to underscore the long-term link between happiness and marriage.

Interestingly, the researchers did not find that personality traits, including the ones psychologists refer to as the Big Five—openness, conscientiousness, extraversion, agreeableness, and neuroticism—predict how an individual will adapt to major life events like marriage or unemployment. For example, prior research has indicated that people who are extroverted react more positively to positive life events, but the findings in this study were inconsistent across the board.

“Basically, life events do matter,” Yap says. “Things like marriage, childhood, widowhood, unemployment do matter in the short-term. But in some cases, these life events don’t have long-lasting implications on psychological adjustment.”

“One thing you can take away from the study,” he adds, “is that, on average, marriage seems to be a good thing.”

While interesting, this study might be a bit misleading.  I say that because while it considers the “Big 5” personality traits don’t apply, it doesn’t seem to consider the subjects level of emotional and psychological autonomy.  Emotional dependency is one of the major burdens of human life and often goes unresolved. Marriage, for some, may also serve as a co-dependent relationship reported to garner “happiness” partly because it compensates a lack of individual autonomy. In my experience, that is one of the primary sources of conflict within marriage. The loss of a partner through divorce or death is undoubtedly traumatic; but is that only because the survivor was simply “happier” with a partner, or because he/she is then thrown back to facing unmet dependency needs? I suspect that it is people with a high level of emotional autonomy who are truly happier, married or single. We need to look at this even more closely.

The finding that married people are happier than
singles has been found in many studies, but
another study can always provide more
information. However, I’m surprised by one aspect
of the findings. It implies that as people get older,
their happiness declines and states explicitly that
this occurs in 20s and 30s. A number of studies
have found that, on average, happiness increases
in 40s, 50s, 60s, and I believe into the 70s. I’ve
found personally (I’m 65 now), that this has been
the case for me. As I’ve aged, I’ve mellowed out
with less stress and more appreciation for life.
This is anecdotal, but many studies have found
that my experience is the norm.