There is a lot of focus on happiness these days. Our own Science of Happiness online course has attracted over 400,000 participants, suggesting that many of us are thirsting for knowledge on how to increase happiness in our lives.

But according to Ruth Whippman, author of the new book America the Anxious, we are going about this the wrong way. Instead of searching for happiness “practices” that focus on the self—things like meditation or yoga, she argues—we need to start spending time together with other people and doing the things we love—in other words, just “living our lives.” 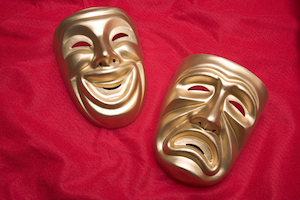 “My instinct is that…happiness should be serendipitous, the by-product of a life well lived, and chasing it in a vacuum just doesn’t really work,” she writes.

Her book is an amusing, enlightening exposé of the American cultural push for happiness. As a Brit who recently moved to California, Whippman finds herself feeling pretty unhappy with her new surroundings, probably because she left behind so much that made her life meaningful—including her friends and her job. So, she decides to look more closely at the American—especially Californian, perhaps—obsession with happiness and try to figure out why it doesn’t seem to work.

The wrong way to pursue happiness

One of her first stops is to explore the research of Iris Mauss at UC Berkeley, who has found that people who rate happiness as a strong personal ambition tend to be less happy. In one study, Mauss and colleagues asked participants to read an article about the importance of happiness in life before watching a happy film, while others just watched the film. Those who read the article were less happy than those who hadn’t—supporting Whippman’s thesis. The article-readers tried harder to feel positive during the film, but they ended up more disappointed with how they felt.

Instead of looking for individual happiness, Whippman suggests we should be looking to our relationships, as happiness research has consistently confirmed that high-quality social connections are the most important contributor to well-being, even to one’s health. Yet the time we spend pursuing social relationships may be declining in the US, in general, and Whippman thinks that the pursuit of happiness as a personal (rather than a societal) quest might be partly to blame. She points to meditation, where people are encouraged to focus on their own thoughts at the expense of social interaction.

“Although deeply associated with a hippy-commune aesthetic, with its insistence that happiness must be found independently of relationships with other people and the outside world, meditation sounds like a deep expression of emotional individualism,” she writes.

Interestingly, after reading research suggesting that religious people tend to be happier—and Mormons the happiest of all—Whippman visits a Mormon family in Utah and spends time looking more closely at their lives. What she finds—and research supports—is that religion itself doesn’t make people happier; instead, what seems to contribute to happiness in religious populations are the sense of community and the social supports that provide a safety net if you have problems in life. However, the Mormon emphasis on cheerfulness at all costs—particularly for women—may actually be leading to increases in depression in Mormon communities.

Who’s to blame for unhappiness? 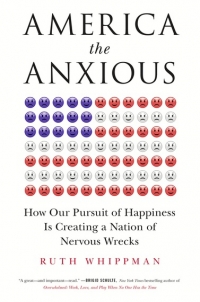 But Whippman has a more basic concern: that the cultural message of happiness being under one’s control (rather than tied to one’s circumstances) masks the larger, structural factors that play into well-being. For example, in comparison to other developed nations, Americans have longer work hours and less paid vacation, more insecure employment conditions, more inequality, and no universal health care. Instead of pursuing yoga or gratitude, perhaps we should take care of these basics first, argues Whippman.

“The happiness-seeking culture is clearly supposed to be part of the solution, but perhaps it is actually part of the problem,” she writes.

Though much of the book is devoted to Whippman’s adventures into the more wild and wacky happiness industries—such as Landmark Forum, an outgrowth of “EST,” and Zappos’s hyper-happiness-oriented workplace environment—her stories do raise alarm bells about certain ways that pursuing happiness is being used to increase profit—both for individual happiness gurus and for corporations. She chides employers who teach mindfulness or provide happiness training to employees as a way to increase “work-life integration”—meaning, spending more time at work and less time at home—and to defuse complaints about work conditions.

“No matter how much happiness training they attend, the reality is that the American worker now has a worse deal than at any point since the Second World War,” she writes. “If businesses had a genuine interest in their employees’ happiness, perhaps the single biggest thing they could do would be to encourage them to unionize” (since happiness is linked to union membership).

Whippman also takes aim at a culture that pushes parents to be overly concerned with their children’s happiness and pressures them (especially women) toward adopting intensive and attachment parenting practices to compensate. Over-parenting approaches often make parents stressed and miserable, she argues, and trying to pin child happiness on parents takes the heat off of government to increase child support and paid leave for working parents—something that nations with happier parents have in place.

“Given these hurdles, it is no accident that American parents are some of the unhappiest in the developed world in comparison to their childless peers,” she says.

The evolving science of happiness

Whippman offers her critique in very entertaining prose, some of which made me laugh out loud. But, while I appreciate her exposé of the dark underbelly of the search for happiness, I wished she had focused a bit more on the more uplifting science of happiness—much of which confirms her suspicions—and perhaps cherry-picked a little less. It seems that she was looking for an axe to grind and found support for her concerns at every turn.

If she had, she might have seen that as happiness research has grown and become more sophisticated, it appears to be heading toward much the same conclusion as Whippman: that happiness requires basic social supports to be in place, that countries with more social supports are happier (and healthier) than those that don’t have them, and that social connections, compassion for others, altruism, and meaningful work or activity are all keys to a happy life.

And, while Whippman critiques practices like mindfulness and gratitude, she ignores the research that shows how these practices positively impact one’s relationships—which may be part of the reason they seem to lead to happiness. To see them only as ways to fool the public into complacency may be a bit alarmist, especially considering studies showing the opposite may be true.

Still, the overall thesis of Whippman’s book is an important one: The pursuit of happiness is really about the pursuit of a caring community and supportive relationships, not about simply increasing one’s personal well-being. Perhaps if we all focused more on the well-being of others—and not just on our own happiness—we’d be on the right track. And we’d be a bit less anxious, to boot.