There’s a backlash brewing against mindfulness at work.

“Corporations have jumped on the mindfulness bandwagon because it conveniently shifts the burden onto the individual employee,” write Ron Purser and David Loy in the Huffington Post. “Stress is framed as a personal problem, and mindfulness is offered as just the right medicine to help employees work more efficiently and calmly within toxic environments.”

Do such arguments have scientific merit? Or do they throw the mindful baby out with the corporate bath water?

These are questions I explored with speakers and participants at the recent conference Mindfulness & Well-Being at Work, organized at UC Berkeley by the Greater Good Science Center, Mindful magazine, and the 1440 Multiversity.

Many of the people I spoke with agreed that mindfulness programs, which are just starting to get off the ground, have problems—but not, perhaps, the ones cited by critics in the New York Times, The Atlantic, Salon.com, and elsewhere. Researchers, mindfulness teachers, and business experts all seem to agree that red flags go up when corporations start to mess with the minds of their employees. And yet more and more studies are finding that the training also confers many benefits—not the least of which is a stronger sense of self-control.

“Our brains are always being shaped, wittingly or unwittingly,” said pioneering mindfulness researcher Richard Davidson in his conference keynote. Mindfulness, he said, “is a way of taking responsibility for your own mind.” 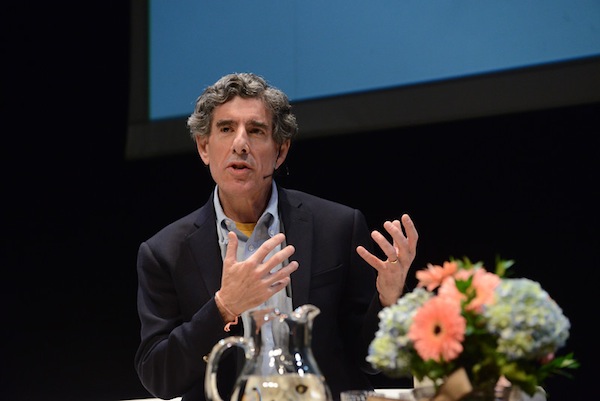 Richard Davidson at the Mindfulness & Well-Being at Work conference on November 13-14, 2015, in Berkeley, California. He is Director of the Waisman Laboratory for Brain Imaging and Behavior and the Laboratory for Affective Neuroscience, and is a pioneer in the study of mindfulness.

What is mindfulness at work supposed to do?

As workplace mindfulness programs, such as SIYLI and the Potential Project, have grown, so has the chorus of criticism. Many of these programs and experimental interventions aim to minimize the time involved. They are moving online, and are trying to shorten the commitment to as little as two weeks or just ten minutes a day. Most focus on stress reduction, building on Jon Kabat-Zinn’s famed and research-tested Mindfulness-Based Stress Reduction program.

For critics, that’s precisely the problem. On Salon.com, for example, Ronald Purser and Edwin Ng quite reasonably point out that “employee stress is not self-imposed nor due to a lack of mindfulness.” Instead, stress arises from external, often unfair, conditions—such as job insecurity or constant technological change—that mindfulness might only mitigate, or so corporations seem to hope.

The solution, Purser and Ng argue, is to change workplaces, not change yourself. They dismiss the possibility that helping employees to cultivate moment-to-moment awareness might actually help them to change workplaces. Since there’s not yet any evidence that mindfulness could be a “Trojan horse” that will overthrow the corporate order, they argue that:

This, of course, seems to suggest that stress relief is an unworthy goal, and perhaps even a distraction from higher-level systemic changes. In the UK magazine The Conversation, Zoë Krupka goes further, charging that corporations are co-opting mindfulness and turning it into “a simple way to bear the unbearable.”

Her charge is not against mindfulness itself but against quick-and-easy corporate mindfulness. As Krupka writes, “This is perhaps the crux of the problem of the mindless application of Buddhist meditation practice: the marketing of mindfulness as a solution to work stress and life balance rather than the complex spiritual approach to living it is meant to be.”

That is an argument with which Fred Luskin, a therapist and director of the Stanford Forgiveness Project, agrees completely.

“There’s an expectation that something that takes decades to develop can be transmitted to a [corporate] culture that has fundamentally different goals,” he told me at the Mindfulness & Well-Being conference. The most important of those goals is, of course, profit.

Indeed, many of the presenters at the conference seemed intent on persuading the audience that mindfulness meditation is good for the bottom line, pointing to a rising number of studies that suggest mindfulness could increase customer happiness, improve decision-making, or build self-confidence in leaders, all of which can theoretically help make the business more successful as a business.

One speaker, Jacqueline Carter, highlighted a benefit I had never even thought of: that mindfulness training can help save lives in certain jobs. We might find it funny to imagine burly carpenters and electricians sitting on cushions with their legs crossed and eyes closed, but in the construction industry, said Carter, the training has a very concrete benefit.

“The biggest reason why accidents happen on [construction] jobs is that people aren’t paying attention,” she said. 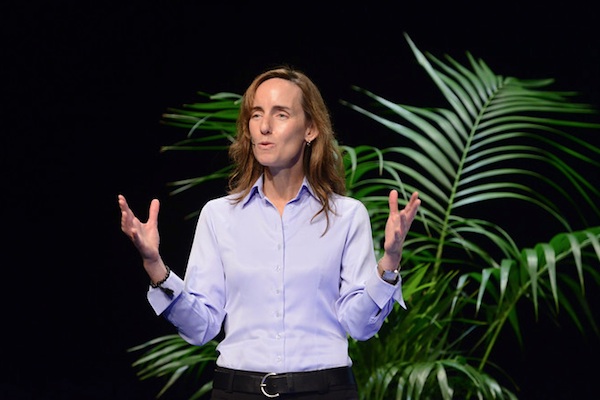 This made me realize that some of the high-level criticisms of mindfulness training at work might be missing the point.

Mindfulness might not address workplace inequality and insecurity, as Purser and Ng allege—but is it supposed to? Isn’t it enough to simply integrate decades of insight generated by hundreds of studies into the trainings that are a part of all workplaces, so that employees can benefit in ways that are specific to their industries? If brief training in mindful breathing and body scans helps construction workers stay safe, is that really so bad?

It may also be too much to ask secular mindfulness training on the job to have the same impact as sustained Buddhist meditation practice. One recent study, for example, found that two weeks of workplace training that included reading and 10 minutes of guided meditation led to better sleep quality. Of course, the training isn’t a cure-all—participants “did not demonstrate significant enhancements in their ability to psychologically detach from work,” which was one of the hoped-for results of the training.

“It is likely you would have to train more intensely or for longer periods of time before you see any effects on psychological detachment,” said Ute Hülsheger, an associate professor of work and organizational psychology at Maastricht University and the lead author of the study. “But it is possible that sleep quality is more sensitive to meditation and that you see the positive effects of the mindfulness training earlier.”

In fact, a great deal of on-the-job mindfulness training can never be more than a simple teaser for the employee. We don’t yet know if these quick trainings can open the door to a deeper practice outside of work, but it seems reasonable to suppose they might. As Hülsheger’s comment suggests, there is a great deal we don’t yet know for sure.

How could we? It’s only in the past few years that businesses have started offering mindfulness training to employees. The people doing and taking the training now are pioneers—and pioneers make mistakes. 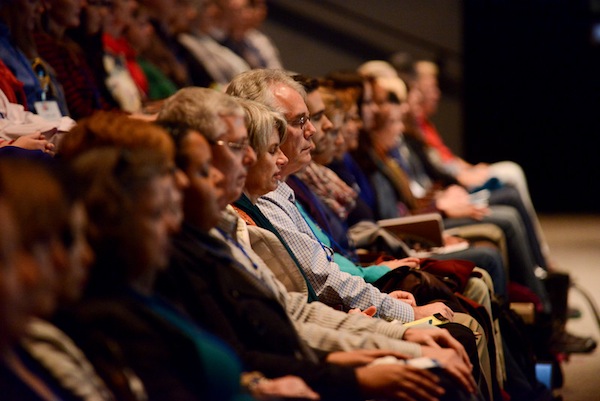 Participants are led through a meditation exercise at the Mindfulness & Well-Being at Work conference.

What do you do with awareness?

Our lack of knowledge seemed to particularly trouble Purser and Ng, who criticize corporate mindfulness from a Buddhist perspective.

They quote Claremont Graduate University associate professor Jeremy Hunter, italicizing words that indicate possibilities, not certainties: “If an organization can work creatively with the questions that increased personal awareness can churn up, that could be a great asset.”

In our conversation at the Mindfulness & Well-Being conference, Hunter explicitly agreed with Purser and Ng on many of their points, particularly the idea that mindfulness training shouldn’t be undertaken lightly—or involuntarily. “Compulsory mindfulness at work is not a good idea,” he said.

Much of the problem with mindfulness at work boils down to a paradox: Mindfulness asks the practitioner to open up doors within themselves in an otherwise impersonal work context.

Among other difficulties, Hunter said, “We need to acknowledge the reality of trauma.” Before workplace trainings he conducts, Hunter interviews everyone who is going to participate about their history, asking specifically about experiences of violence or abuse, which recent research has found can be amplified by mindfulness training. The training can’t leave people hanging, said Hunter.

“What do you do with this awareness? Share it? Keep it inside?”

This might be ultimately what makes the critics uncomfortable: Mindfulness training seems like another way for employers to invade and control our inner lives. In her essay, Krupka seems especially concerned that corporate mindfulness training could end up essentially being a form of mind control.

“Mindfulness is an ideal tool to induce compliance, with its focus on the individual management of our responses to forces we’re being told are well beyond our control,” she writes.

This is a criticism that makes Hunter impatient. He argues that most “sophisticated managers” are genuinely interested in the well-being of employees. Even if that weren’t true, however, mindfulness is a skill that can be used in many ways.

“Most of life is subject to forces well beyond our control,” he wrote to me in an email after the conference. “Anyone with chronic illness, screaming children, or an airline frequent flier account could tell you that. Having more tools to bear the unbearable is always a good thing.” He adds:

I can only speak from my experience, but my clients seek out mindfulness and self-awareness for their teams because they want exactly the opposite of compliant passivity. They WANT people to take greater assertive action in the work place, to be responsible for the culture they are a part of and co-creating and not to sit around waiting to be told what to do. 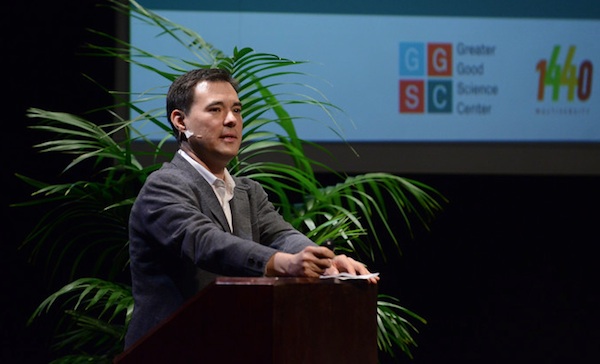 Jeremy Hunter at the Mindfulness & Well-Being at Work conference.

Rhonda Magee agrees, to a degree, with both the critics and Hunter, suggesting that the truth on the ground, within workplaces, can be quite complicated.

As a law professor at the University of San Francisco, she has led efforts integrate secular mindfulness practices into her department at all levels—and she claims to see results. Her dean says it has encouraged faculty and staff to express more gratitude and compassion toward each other. But more than that, mindfulness has helped the department to address matters of equity, including pay inequities. In an email to me, she writes:

It has not been easy, but we are infusing our efforts to address this issue with as much compassion and mutual appreciation as possible, and yet we are addressing these issues: something we had not previously done in my 18 years on faculty.

The truth is that institutional, systemic effects of mindfulness have not yet become well-defined in the field, nor have they become the subject of much (any?) research. This is consistent with the dominant contemporary norm among research communities across the board to focus on individual-level, quantitative measurements.

Magee doesn’t pull her punches: She doesn’t think “the contemplative research community” has been focused on institutional change and power differentials, possibly because equity between groups remains a “blind spot” for relatively privileged people.

But while she might seem, at first glance, to stand on the side of the critics, Magee doesn’t feel that many of them are very constructive in their criticism. “I believe in being a part of solutions,” she writes. “I think we need to point this out and do our own work to develop this dimension of both the practice and the research.”

This might be the bottom line with mindfulness at work: We have to try before we can understand its impact—and how we can improve.

While this year’s Mindfulness & Well-Being at Work conference focused largely on empowering participants to go back to work on Monday and develop new programs, future gatherings will, I suspect, contain a great deal more disagreement as well as news of real-world results.

Mindfulness might not create utopian workplaces—but all the research and anecdotes to date suggest that it produces modest but measurable improvements in the well-being of the workers. That’s well worth pursuing.

All photographs by Auey Santos.