As Christine Blasey Ford testified in the confirmation hearings of Supreme Court nominee Brett Kavanaugh, women around the country were glued to their televisions and computers. Watching a woman bravely telling her story of sexual assault—something so many of us have experienced to one degree or another—was painful to watch, yet riveting. 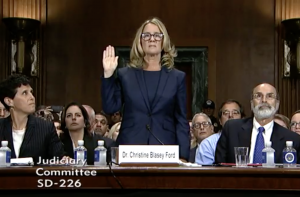 Dr. Christine Blasey Ford is sworn in to testify in the confirmation hearings of Supreme Court nominee Brett Kavanaugh.

But in the analyses of the hearings, I couldn’t help but be struck by the double standard in play. While Ford was praised by many for her vulnerability and calm, steadfast recounting of what happened to her, the opposite was true for Kavanaugh—he was praised for his anger and defiance, even by the President. These different displays seemed to confirm our biases about how men and women should behave when wronged: Women should be sad and anxious, while men should be angry and combative.

To understand the forces at play in this unfolding drama, I suggest reading author Soraya Chemaly’s new book, Rage Becomes Her: The Power of Women’s Anger. It’s an enlightening read about the insidious ways women are socialized to stifle their anger, often to placate others—at the cost of their own mental and physical health. The book makes a strong case for why women should wake up to their anger and push for social and political change to correct injustice instead of “playing nice.”

“Women should be angry about the violence and fear that inform so much of our lives,” she writes. “Anger is the emotion that best protects us against danger, unfairness, and injustice. Understanding it and learning to think about its methodical uses in response to threats like these allows girls and women to move from passivity, fear, and withdrawal to awareness, engagement, and change.”

What’s the point of getting angry?

Why anger—or rage, as the title suggests?

Because anger is what psychologists call an activating emotion—one that propels us to engage rather than withdraw—and this is what is needed to drive society forward, claims Chemaly. Though there are clearly benefits to being calm rather than angry, especially over time—like less physiological stress, better immunity, and a lower risk of heart disease, for example—Chemaly argues that repressed anger is not beneficial and, in fact, may lead to poorer health or depression. Though women are often uncomfortable expressing anger, that doesn’t mean they don’t feel it, she insists; instead, their anger—often triggered by unjust treatment or a lack of reciprocity in relationships, according to researchers—is misread or discounted.

While research clearly suggests that being open to all of our emotions is good for us, children are still often steered toward certain emotions over others, based on gender. Girls are socialized to repress their anger and act submissively, while boys are socialized to suppress their sorrow and act tough—often from an early age. This probably isn’t much of a surprise to anyone, but it does show that the disparities start early on, potentially disadvantaging girls.

Why is this a problem? Maybe because women have a lot to be righteously angry about, says Chemaly. Though gender equality is increasing in the United States and elsewhere, women still do more housework, child care, elder care, and service work than men, often for free or reduced wages. Whether it’s the problems women encounter when standing up for themselves at work, the frightening statistics around domestic violence and rape on college campuses, or simply the everyday stress of facing discrimination and ubiquitous sexual harassment, it’s hard not to feel one’s blood boil when reading Chemaly’s list of injustices and inequalities. Mine certainly did. No doubt, that’s her intention—to wake women up to the ways they are being discounted and to incite more action.

“We are so busy teaching girls to be likable that we often forget to teach them, as we do boys, that they should be respected,” says Chemaly.

She points to the ways that women are systematically kept out of the public eye—rarely on our currencies or on public statues—which works against having a sense of self-worth and efficacy. Women are less likely to be the protagonists in stories or movies, and are often portrayed in media as sex objects, unidimensional, or all-giving, rather than as heroes or complex characters. Anger makes people visible; repressing anger reinforces invisibility. And women, Chemaly forcefully argues, need to be more visible.

How to be mad

Unfortunately—and perhaps understandably, given the scale of the task—she gives rather short shrift to how women can overcome centuries of repression, not to mention the hostile reception others have to our anger. Still, she does make some suggestions that can help women take steps toward standing up for themselves.

Develop self-awareness. Many women are not even aware of their negative emotions—they’ve been encouraged all of their lives to be positive and to smile. For them, it may be important to first learn to become aware of their anger. Using mindfulness meditation, expressive writing, or even therapy can help women develop awareness and embrace what their anger may be telling them needs to change.

Know the difference between anger, aggression, and assertiveness. Women who stand up for themselves assertively tend to be more emotionally resilient, says Chemaly. But, while aggression may be considered taboo for women, there are times when it may be the appropriate response…especially when one is being attacked or not being taken seriously. Chemaly suggests we pay attention to the subtle ways we communicate powerlessness—whether it’s overusing the word “sorry” or backing down from a demand too easily—and continue practicing assertive persistence.

Be brave. No one wants to be disliked, but sometimes we have to draw on our courage to tell our stories and stand up for ourselves. Chemaly suggests making sure that, when doing so, you aim for “kindness” rather than “niceness.” That way, you can avoid being a people-pleaser and stay true to yourself.

Take (deliberate) care. For this, Chemaly doesn’t mean hanging out at the spa. She means not taking on extra responsibilities or refusing help offered by others out of some misplaced sense of martyrdom. Women often are expected to subsume their own needs out of consideration for others. That may not serve them, especially if their efforts are taken for granted.

Cultivate body confidence. Stay healthy and encourage young girls to be active in sports, which helps promote a clear sense of one’s personal strengths. Don’t let cultural messages about the ideal body type penetrate your sense of self.

Take your anger to work. Obviously, this needs to be done carefully, as a boss may have power over your livelihood. But recognizing what is problematic in your work environment—whether it’s being dumped on by a colleague or not getting recognition for your work—and then talking about it in an assertive, strategic way is important for one’s self-respect.

Cultivate communities and accountability. It’s always easier to stand up for yourself when you have the support of others. Engage and work together for change.

Challenge binaries. Don’t accept the stereotypes that say women are more emotional and irrational than men. All people feel emotions, and emotions are informative, as well as motivating. Paying attention to them and expressing them is healthy and necessary for us all.

Trust other women. Women are sometimes just as bothered by women’s anger as men are. It’s helpful to remember that this may come from cultural stereotypes about angry women being ugly or bad, and that it might be better to listen and understand the reasons for women’s anger rather than reacting with hostility.

Accept a desire for power. Women want power as much as men do; it just doesn’t square with what society tells us about women. Sometimes pushing for power can make women feel as if they are somehow “hurting men” in the process. They’re not. All people need power to change the institutions that govern their lives, argues Chemaly, and it’s OK for women to strive for power.

When anger works—and when it doesn’t

Of course, anyone who’s been on the receiving end of an angry rant will also wonder at how Chemaly distinguishes righteous anger from the destructive kind—not to mention from just plain venting. 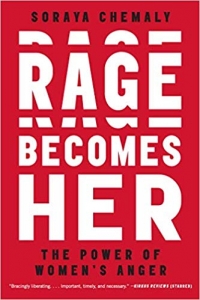 She suggests that raging to get one’s way, maintain power over others, or silence critics is a poor use of anger, while raging for protective or constructive ends—i.e., ending abuse or discrimination—is necessary. We need to be clear on the reasons for our anger in order to differentiate what goals we are trying to achieve, which will also help our anger be directed toward the greater good…rather than simply our own good.

The key may be in more women bringing their angry stories to light and not hiding in shame or worry about their likability. Think about the remarkable power of the sexual assault survivors who angrily confronted Senator Jeff Flake in an elevator, causing him to reconsider the need to investigate Ford’s claims. If they hadn’t channeled their anger, it’s likely we’d be in a very different place right now—with Kavanaugh confirmed and Ford’s testimony simply brushed under the rug.

Demanding that we be listened to, argues Chemaly, will help prevent us from becoming victims. That means standing up for ourselves—and other women—and engaging with the barriers that keep society from moving forward. And it means learning about the upside of expressing our anger and how to channel it effectively without burning out.

“Women cannot, by themselves, remedy this situation,” she writes. “We can, however, deliberately and methodically set out to grow people, build families, communities, institutions, and societies that take our concerns seriously and recognize that what happens to us is important. Not because we are enraged or suffering, but because we are valued.”

If that means embracing some discomfort and allowing our anger to manifest, I’m all for it.