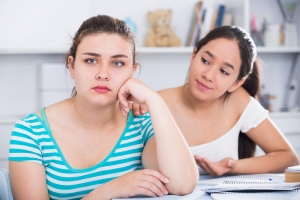 Indeed, my research has found that it takes many years for us to grasp the notion of forgiveness as we grow up. In over 30 years of studying forgiveness, I have interviewed children and adolescents, as well as college students and adults—and found that our understanding of forgiveness evolves over childhood and young adulthood, partly influenced by what we learn from our parents and communities.

Young children are often taught that the proclamation of “I am sorry” followed by the automatic reply of “I forgive you” can solve any conflict. This may be because we as parents and educators seek a quick solution to interpersonal disputes—and when problems are short-lived, these kinds of quick exchanges help. At the same time, if there is deeper hurt with deeper anger, children need more time to process the unfairness and to feel angry for a while.

To support children’s maturing understanding of forgiveness, parents can start by having age-appropriate discussions about it with their kids, based on where kids are in their cognitive and emotional development. These conversations can change the way children think about forgiveness and help them emotionally recover when they inevitably experience harm and unfair treatment from others in life.

In our studies of how children, adolescents, and adults think about forgiveness, we assess their thinking by presenting them with dilemmas and asking them questions about what kinds of conditions might make forgiving easier. As an example of a dilemma, Mrs. Jones falsely accuses Mr. Thompson of a crime, and he now faces time in prison for something he did not do. In general, what we find is that children and adolescents start with some misconceptions about forgiveness—and eventually grow in their understanding and practice of it.

When they think about forgiveness, fourth graders often equate it with first getting even. Without formal learning about what forgiveness is, many nine and ten year olds think they could forgive and make up with classmates only if those classmates first got what they deserved: punishment for their misbehavior.

Of course, sometimes classmates aren’t punished, because whatever happened never gets the attention of a parent or teacher. If kids don’t forgive unless the perpetrator is brought to justice, they may never be able to release their pent-up anger.

At this stage, one way to help kids learn about forgiveness is to challenge their conditional thinking (if no punishment, then no forgiveness). Parents can encourage their children to reflect on these questions: Do all people have inherent or built-in worth? If so, do those who act unfairly from time to time also possess this kind of worth? If so, can you see that those who sometimes hurt you also have inherent worth?

It’s not that people with inherent worth should never be punished. But as children see the inherent worth of everyone, including those who behaved badly, then they might consider forgiving (because the other has worth) and not become trapped in their anger as they await punishment that may never come.

This does not mean that kids abandon the quest for justice or stay quiet about the harm done to them. Instead, it means that external circumstances will not get in the way of the emotional healing that forgiveness can provide.

Compared to fourth graders, when we talk to seventh graders, we see them developing what is called a reciprocal perspective. They can think of themselves and others at the same time, and in turn they can try to do good for themselves and others. With a reciprocal perspective, the students often say that it will be easier to forgive if they are compensated for what happened to them.

This is not the same as the younger kids who seek punishment. If a 12 year old had an apple stolen at lunch, for example, then they might forgive when the other person eventually gives them an apple in return.

What’s similar is the tendency for these children to see forgiveness as a conditional act, offered only if there is recompense. Again, this means that they can get trapped in deliberate unforgiveness until compensation comes.

Of course, compensation is not always possible. If one person pushes the other down, what compensation can occur there? Perhaps a heartfelt apology will do, but it’s less clear-cut and the conditional forgiving may never take place.

Around this age, we can help kids learn about forgiveness by distinguishing forgiving from reconciling, a process where people negotiate their way back to a sense of mutual trust. Is it possible to forgive before you reestablish trust with the other person? The answer is yes; just because you forgive someone doesn’t mean you’ll choose to reconcile with them, and just because they aren’t interested in reconciliation doesn’t mean you can’t release your anger and get closure through forgiveness. As kids see that forgiving and reconciling are not the same thing, then they may be more open to offering unconditional forgiveness, even while (as above) they still strive for fairness.

In my interviews, some of the seventh graders and many of the 10th graders take a more complex view of forgiving, unrelated to the need for punishment or compensation. Now, the focus is on their peer group and their family context. Students consider: What does my peer group have to say about forgiving? Do they like it and encourage it, or not? What does my family think about forgiving?

At this point, the teen’s willingness to forgive depends on what the norms are in their group and family. Similar to younger ages, the teen continues to be influenced by outside factors—here, other people’s beliefs and attitudes—rather than driven by an internal conviction that forgiveness is good in and of itself.

Still, social norms can be useful in shaping people’s own values, so nurturing forgiveness at this age means taking advantage of those norms. For instance, we can highlight examples of peer and family interactions in which forgiving was a central theme and seen as good. Hearing stories of peers accepting forgiveness, or families who go through conflicts and yet forgive and reconcile, might help teens to value and try out forgiveness for themselves.

If parents are opposed to forgiving, then at this stage it becomes more difficult for adolescents to learn to appreciate it. Still, if peers and teachers value the norm of forgiving, this can challenge adolescents to think more deeply about it. We get conflicting messages all the time in society, and this is why some of the important groups in an adolescent’s life (including families, social media groups, or houses of worship, if they belong to one) might consider talking about the theme of forgiveness as a possible response to unfairness.

Adolescents can easily handle the cognitive complexity of holding both forgiveness and justice in mind at the same time: Forgive and seek justice.

At its highest developmental level, forgiveness means to unconditionally offer mercy to someone who acted unfairly. College students and adults begin to see that if forgiving is a strong moral virtue, then it should be offered regardless of external factors like punishment, compensation, or the norms of different groups. They tend to see forgiveness as worthy of their time because it is good for families, communities, and entire societies.

The highest form of forgiving is to offer love and kindness for the good of others—and not for some self-serving reason, like hoping for compensation or approval by our peer group after we forgive.

Sometimes, though, young adults (just like teens) can still experience external pressure to forgive, if they see that their communities demand forgiving. In other words, they are forgiving because of other people’s expectations and not yet as an end in and of itself.

It is hard work, but helping our children to reach this highest level of forgiving can set them up to exercise their own free choice to forgive, and to live a life without unhealthy anger and with more peace.