If you’re a parent or an educator, insisting that children apologize is a daily—sometimes hourly—occurrence. Apologizing and naming what we’re sorry for (“I’m sorry…that I called you stupid”) is a major part of our culture’s moral education. We even coach children to really “say it like you mean it” and to “think about” what they’ve done when they’ve harmed someone.

However, we may be forgetting a crucial step in the process of atonement: forgiveness. New research suggests that we should consider focusing not just on the offender but also on the injured child’s response to a wrongdoing. 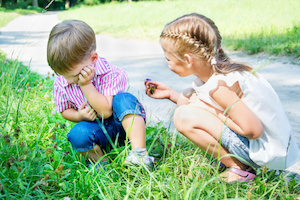 Plenty has been written about the positive effects of forgiveness on adults. Studies show that the act of forgiving someone can make us grown-ups happier, healthier, and more connected. Major self-help systems, like Alcoholics Anonymous, prize forgiveness as an essential key to healing and living a productive life. As we understand better what it means to forgive, we’re also starting to understand more about the role forgiveness plays in the lives of our children.

Researchers in the Netherlands set out to learn whether children’s ability to forgive others was related to their psychological well-being. They asked older elementary school students (ages 9-13) to think about a time when a classmate did them wrong. The children then completed a questionnaire measuring how much they had forgiven the classmate and performed a task where they could give that classmate credits towards a gift, a behavioral test of forgiveness. They also took surveys to determine their psychological well-being, including life satisfaction, happiness, and self-esteem.

After crunching the numbers, the researchers found that both types of forgiveness were positively associated with overall well-being, with one caveat: The classmate who committed the offense had to be considered a friend. With non-friends, there was no relationship between forgiveness and well-being.

What might this mean for the children we teach and raise? Although this study didn’t show a causal relationship, it did suggest a connection between forgiveness and well-being. It may be that when a child cannot forgive a friend, their friendship deteriorates and this impacts their happiness. This effect would be less relevant when dealing with someone whose friendship matters less. In this way, forgiveness may help children maintain strong relationships. On the flip side, it may also be that children with higher psychological well-being are more able to forgive.

As adults, we have to help children tease out the nuances of their relationships, including when it’s important for them to practice forgiveness. Here are some ideas that may help:

While more studies like this one may further illuminate the relationship between forgiveness and well-being for children, for now it might be worth our while to move beyond “I’m sorry” as the be-all and end-all goal of conflict resolution. To raise happier children, we should take steps that lead to a lot more “I forgive you’s.”