This past weekend, my preschooler’s neighborhood buddies didn’t want to play frisbee with him. Despite his insistence, they left him to go play with his soccer ball—and, unsurprisingly, he was fuming. 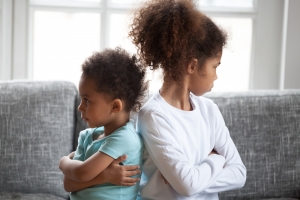 Although my son didn’t stay mad for long, kids, like adults, can hold on to intense anger when they feel wronged. At its most extreme, this anger can lead young people to ruminate about betrayal and seek revenge through acts like physical aggression that can devastate families and communities.

Can we teach our kids to forgive instead?

As psychologist Robert Enright and psychiatrist Richard Fitzgibbons write, forgiveness is a choice to let go of anger toward someone who hurt you and to think, feel, or act with kindness toward that person. They clarify that forgiveness is not being weak—it takes strength and courage to forgive. It is also not forgetting, condoning, or putting up with being hurt; you can forgive while still seeking justice. And forgiveness is different than reconciling with someone; you can forgive without receiving an apology.

Forgiveness might seem like an impossible feat for a child who doesn’t yet have all the tools in her toolbox that adults do to handle emotions like anger and the desire for vengeance. But a wide range of studies have found that forgiveness programs can help kids of different ages feel better, strengthen their relationships, and improve their academic performance. According to Enright, we can learn from these programs about how to teach age-appropriate forgiveness skills, so kids grow up to be more peaceful and forgiving adults.

Teaching forgiveness around the world

Forgiveness programs typically invite families or students to participate in facilitator-led weekly group sessions over multiple weeks. Children are introduced to conflicts between fictional characters before they are guided to reflect on their own personal conflicts. They explore the different ways to deal with the hurt that results from conflicts, including the option of forgiveness. After children learn the foundational concepts of forgiveness and what forgiveness is and is not, there is facilitated reflection on how to forgive—as modeled by a story character first, and then as a choice they can make toward forgiving someone who hurt them.

In studies, while some kids go through a forgiveness program, other kids are part of a control group so that their results can be compared. Those kids either go about life as usual or learn something else, like effective communication, conflict resolution, assertiveness, or empathy.

First graders all the way through 21 year olds have participated in forgiveness programs like this. They have been implemented in Belfast, Northern Ireland—the most impoverished area of the United Kingdom, which has a history of conflict between Irish Catholics and British Protestants; Milwaukee, Wisconsin—a highly segregated city where children struggle with poverty and there is conflict among racial groups; and some areas of Turkey that are stricken with poverty and violence. They have also been offered to Midwestern teens who experienced a deep personal hurt, like being abandoned, cheated on, emotionally abused, or raped; and to young women in South Korea who were victims of aggression.

In these studies, forgiveness programs offer kids a variety of benefits compared to control groups—ranging from more empathy and hope to less anger, hostility, aggression, anxiety, and depression. After learning forgiveness, some children even perform better at school, have fewer conduct problems and delinquency, and feel more positive about their parents and teachers.

In researching forgiveness for over three decades and implementing some of these programs, Enright has gained insights into how to help children and adolescents learn and practice forgiveness. Here, he describes how to set the stage for forgiveness in your very young children and start building their forgiveness skills as they become young adults:

Ages 4-5. Before introducing young children to the subtleties of forgiveness, you can first introduce them to the concept of love—caring for the other for the sake of the other. For example, you can do this by reading picture books to your children in which there are loving family interactions.

Ages 6-7. Starting at about age 6, children have the capacity for what Jean Piaget called concrete operational reasoning, meaning that they now can understand the causes and effects of people’s actions. Because of this advance in reasoning in young children, you now can begin to introduce forgiveness systematically. There are five sequential steps you can take to help such young children become rather sophisticated in their understanding and practice of forgiveness.

Step 1. You can introduce the theme of inherent worth or the idea that all people—no matter who they are or how rich or poor they are or how smart they are—have value. Each person is special, unique, and irreplaceable. Again, you can introduce this concept apart from forgiveness and through picture books like Dr. Seuss’s Horton Hears a Who! This is a helpful story for introducing inherent worth because of the repeated theme: “A person is a person no matter how small.”

Step 2. Before introducing the theme of forgiveness itself, you can then lay a further foundation by showing children the themes of kindness, respect, generosity, and again love. You can continue this learning apart from forgiveness and through story books.

Step 4. You can be very clear to young children that to forgive does not mean automatic reconciliation. Sometimes, a child must stay away from another child if the latter is continually bullying. The one who is being bullied needs to tell an adult.

Step 5. Next, parents can then apply all of this learning to children themselves, but only if they are ready and only if they choose to consider forgiveness. Forgiveness is a choice and should not be pressured. For those who are ready, they can draw on what they have learned from the picture books and consider seeing the other who acted unjustly as possessing worth. For those who are ready, they can then consider offering kindness, respect, generosity, and love toward the offending person.

Because these steps require time, they should be continued for the next several years, using new stories so that the learning deepens in different contexts.

Ages 10-13. As children get older, parents can introduce the three themes of forgiving, receiving forgiveness, and reconciling, which can occur in later elementary school and middle school. To receive forgiveness requires the humility to acknowledge wrongdoing and to wait until the one offended is ready to forgive. To reconcile, the two people are willing to come together again in mutual trust. In other words, the one who was unfair takes steps to change. Forgiving can occur without reconciliation if the one who offends refuses to alter the unfair actions.

Ages 14-18. Once they are versed in the above themes, high schoolers are ready for a more sophisticated forgiving by following the steps in the Forgiveness Process Model. Adolescents in high school may be ready to consider the challenge to forgive not just one person but anyone toward whom they harbor continuing resentment.

“Forgiveness is a virtue hard to exercise and challenging to implement in the face of injustice but one that offers a concrete hope for peace,” explain Enright and Fitzgibbons. They recommend family forgiveness gatherings at least once a week, such as during mealtimes, to talk about what forgiveness means, how it feels, and what is easy and hard about it.

Because conflict is inevitable, teaching children about forgiveness early on—starting with struggles with playmates over frisbees and soccer balls—may indeed be a path toward building communities of people who prize and cultivate peace.