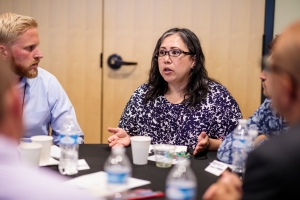 In this contentious climate, many Americans have retreated from civic life, or have responded to social conflict with calls for civility. But abstaining from civic life only cedes our public dialogue to the most contentious and polarizing voices. And too often “civility” means the mere absence of argument, or politely ignoring our differences.

We believe that American civic life doesn’t need fewer arguments. Instead, it needs better arguments. We believe that argument has the potential to help bridge ideological divides—not by papering over those divides but by teaching Americans how to engage more productively across difference, whether in town meetings or across the dinner table. Indeed, argument has always been a critical aspect of American democracy: Fundamental and perpetual tensions between core values such as liberty and equality, for example, have existed throughout our country’s history. The point of American civic life is not to resolve these tensions. Rather, we need to understand their origins and grow smarter about engaging them. Through the clash of different ideas and points of view, we often emerge with deeper insights and stronger solutions to the problems that affect us all.

However, the arguments in American politics today are inadequate. We believe the more we can equip communities to argue thoughtfully and constructively, the healthier our country will be. We created the Better Arguments Project to make this possible and, by doing so, to help renew civic life.

The Better Arguments Project is a collaboration by the Aspen Institute Citizenship and American Identity Program, Facing History and Ourselves, and the Allstate Corporation. Our efforts began with a deep exploration of the question: What is a better argument? Over the course of a year, our team met with more than 75 advisers from all around the United States. Drawn from more than 25 communities, our advisers were high school students; experts in law, history, politics, communications, and psychology; educators; and former elected and White House officials.

Our advisers helped us to distill five major principles of better arguments. Our team then partnered with communities around the United States to explore what these principles could look like in practice. From rural Arkansas to urban Queens, from Anchorage to Detroit, in large public gatherings and intimate conversations, we tested how to nurture better arguments in the context of real communities divided by real and pressing issues.

Here are our five principles that make arguments better—and what they look like in practice.

We may be suffering from a general sense of division in the United States, but a Better Argument event must begin in the needs, culture, and context of a specific community.

In our process, local, on-the-ground partners identify issues most relevant to their own community. In Denver, Colorado, we recently explored tensions about housing, jobs, and political power emerging from the region’s major tech boom, in partnership with Anythink Libraries. In Anchorage, Alaska, we considered the human impacts of a changing climate with the Alaska Humanities Forum. All of these arguments expressed the deep American theme of individual rights vs. collective responsibility in a distinct way.

Attending to context also means intentionally structuring the conversation to create shared knowledge and reflect local culture. In Detroit, Michigan, where a large community event focused on tensions between natives and newcomers in a changing city, a shared sense of the city’s history was an essential precursor to argument. Our local partners at the Urban Consulate invited a prominent local poet to give a dramatic reading that painted a vivid picture of Detroit’s past for all attendees. In Anchorage, where Native Alaskan culture prizes group relationships and cohesion, we invested more time in longer introductions by participants, and facilitators considered a Native “talking circle” as a model for the conversation.

Everywhere we’ve worked, intentional grounding in the local context has been key to a successful encounter.

2. Take winning off the table

Many public arguments surface in contexts where a lot is at stake: persuading the city council to approve or reject a new housing development, or debating a new school districting plan. A Better Argument, however, is not about winning or losing, defeating or converting the “other side.” It’s about presence, and the robust exchange of ideas. Whatever the issue, setting those boundaries fosters a more open and honest discussion. 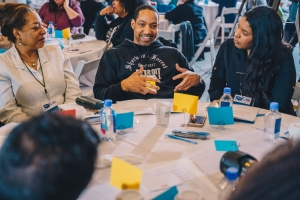 In Queens, New York, our team worked with a local museum, Socrates Sculpture Park, that wanted to engage the citywide debate about controversial public monuments and memorials. The city government had instituted its own process, with a panel of experts and formally structured public hearings to decide the fate of monuments to Christopher Columbus, Theodore Roosevelt, and others.

Our partners aspired to something different. We suggested inviting a broader public into a shared inquiry framed by open-ended questions that would surface divergent views, like “How should public art reflect the identity, history, and aspirations of our community?”

When we take winning off the table, we preserve a space to both speak and listen, creating relationships that can build connections, support better decision making, and inspire civic involvement.

An argument becomes “better” when we start the conversation with human connection and prepare to listen, not just advance our own points of view. The Better Arguments we’ve hosted are crafted to bring together people of diverse viewpoints who may not have engaged with each other before. No matter the setting or the topic for argument, we always ask participants to “be human first.” This means inviting people to share their identities and their stories, not just their opinions.

We set the stage for a “better” argument with conversations that surface personal identity and shared experiences. We began our discussion of the Denver tech boom by asking, “What makes you proud to be a member of your community?” In Detroit, longtimers and newcomers each responded to the question, “Where do you feel at home in this city?”

Any difficult conversation, whether facilitated or informal, can begin with open-ended questions like those to humanize participants as individuals with complex identities, not just representatives of opposing viewpoints.

We also promote listening with intentional reflection questions. As the conversation evolves into argument, pairs and tables are asked to step back and consider questions like “What is something someone else said that you appreciate? How has others’ thinking connected to, extended, or challenged your own?” Active listening and perspective taking dramatically can enhance arguments, at least as much as evidence and logic do.

Better Arguments are hard work, and there is inherent risk in showing up. A successful Better Argument depends on participants’ willingness to be open, honest, and vulnerable, as both speakers and listeners. We’ve had success with brief “contracting” exercises to establish trust and set norms at the beginning of each event.

In Detroit, the conversation about natives and newcomers was threaded with difficult issues of race, privilege, and painful history. We asked each participant to silently finish the sentence, “When I think about how Detroit is changing, I feel _________ because ________.”  The facilitator asked participants to call out the feeling they wrote down: “Angry.” “Excited.” “Conflicted.” “Invisible.”

“Given this wide range of powerful emotions,” the facilitator asked, “what do we need to feel secure and take risks in today’s conversation?”

Some participants asked for patience; others requested confidentiality. As important as the actual norms is having the opportunity to construct them together.

5. Be open to transformation

Without a goal of winning or even reaching resolution, the experience of a Better Argument can instead change how we engage with a difficult issue and with one another. Our events end with an invitation to reflect on the shared experience with a simple but powerful prompt: “I came in thinking ________; I’m leaving thinking _______.” In Anchorage, a policymaker said, “I came in thinking I wasn’t sure I wanted to be here, and I’m leaving thinking that this was a different conversation than I’ve ever had about this topic and I want more.”

We also connect reflection to action by asking participants to complete a final statement, “So now I will….” Their responses reveal how engaging consciously in a Better Argument can spark small but powerful changes in individuals and communities. In Detroit, participants said, “I will stay in touch with the five new people I met today”; “I will introduce myself to my neighbors”; “I will plan a tour to introduce my part of town to newcomers”; and even “I will not be so afraid to talk about difficult topics going forward.” Some event organizers have used the “I will…” cards to identify promising ideas and then offered support to those projects. Others have created opportunities for participants to continue to come together to explore the Better Arguments topic.

Every Better Argument we’ve hosted has been distinct, but these five principles were core to each and will be the foundation of our work going forward. As we continue to travel the country and learn from communities, we’re working forward a vision of inspiring and supporting all Americans to have better arguments in the coming years.

Fundamentally, engaging in Better Arguments means showing up for one another as citizens. Painful at times and celebratory at others, Better Arguments are an opportunity to evolve and expand our sense of community. In this sense, arguments don’t have to drive us apart. Better Arguments can bring us together.