On any given day, many of us wrestle with our fears. We might be contemplating a career change, telling someone we love them, or wanting to speak up for what’s right when we see injustice. But a voice within us pipes up saying that there’s no point, or that we aren’t really capable of creating the life or world we desire. 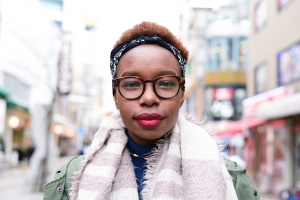 Whether you call it “fear” or some other name—anxiety, stress, discomfort, life challenges—the cycle often plays out in the same way. We have a desire for change, but our fear of what might happen or the worry that we are somehow not enough can keep us stuck.

In my new book, The Courage Habit, I argue that when it comes to dealing with fear, we often go about it all wrong. Instead of seeing fear as bad and trying to get rid of it when it arises, we can choose to accept fear as part of the process of change and instead practice courage. This choice can help you to feel more emotionally resilient as you make life changes or go after big dreams.

Though courage is often thought of as an inborn character trait, it’s actually a way of being and a practice that can be learned for coping with difficulty. In other words, courage can become a habit.

Usually, we think of habits as actions, like brushing your teeth or exercising. But habits also consist of our behavioral responses to different emotions. For many people, fear-based responses are the natural, habitual response to adversity, because our brains tend to seek the fastest, most efficient way to relieve stress when we feel it. That means we rely on solutions that have provided short-term stress relief in the past—like procrastinating in response to feelings of self-doubt, or putting perfectionism into overdrive (which eventually ends up sabotaging us through burnout).

Your brain likes predictability, and it’s primed to “reward” you for choosing familiar responses and routines. So, if you ditch the plan to go after that dream and instead choose what’s known and therefore safe, you’ll be “rewarded” as the brain relaxes.

How do you manage fear differently? You can understand that it’s part of the human condition and aim to work with it rather than against it. Drawing from research on habit formation and stress reduction—and my own work with clients facing fear—I have discovered four useful strategies for dealing with fear and moving closer to courage.

Fear shows up in the body, often as sweaty palms, a sick-feeling stomach, or a vague sense of discomfort. Once our bodies head into fear mode, we need a way to recognize the signs and work with what the feelings are telling us. A body-based practice can help.

Using focused breathing or body scans—both practices associated with mindful meditation—can help us tune into our body’s sensations without trying to change them or judge them. In this way, we can access our fear without rejecting it or being pulled into an old fear routine. That leaves us freer to better identify the source of the fear and pursue the things we want in life.

If mindfulness practices don’t cut it for you, you can also try dancing, running, yoga, stretching, hiking, or even sex. Just increasing your enjoyment and acceptance of your body can help you listen to it when it’s telling you something’s wrong.

Many of us who are stuck in fear have an inner critic, constantly feeding us misinformation about our abilities and telling us we are doomed to fail. Often, we’re not even aware of that voice. Or, if we are aware of it, we try strategies to quiet or get rid of it—like ignoring the critic entirely, placating it by trying to do things perfectly (so there won’t be anything for the critic to focus on), or attacking it directly by saying to ourselves, “I’m not going to listen to you—shut up and leave me alone!”

While these strategies can give us temporary relief, they don’t actually make the critic go away. Instead, we need to reframe the voice as a part of ourselves that’s trying to get our attention, and to learn to listen.

If we can take time to listen to our inner critic without attachment—without the need to ignore or accept what it is saying—we’re in a better position to learn from it. Expressive writing or working with a coach or therapist can help us to understand the origins of our critical thoughts and to glean helpful information without getting hijacked.

As humans, we make meaning out of our experiences by telling stories to ourselves about how the world operates. But here’s the important part: Those stories might not be objectively true. They are more like your personal lens on life, coloring your experiences just as if you were wearing sunglasses. Your stories have everything to do with how you see yourself and the world—whether you’re a victim or a survivor, whether an experience is dangerous or an opportunity, and whether you have the capacity to develop more courage or you are “just not very brave.”

It’s not wrong to adopt stories—everyone has internal assumptions to orient themselves in the world. But some stories are more helpful than others. For instance, we’ve probably all met people who tell themselves that “everyone is selfish and only out for themselves.” Because they see the world through that lens, they are suspicious of people’s motives, inclined to tally up people’s wrongs, and have a “gotta look out for myself” attitude—which isn’t necessarily helpful.

Luckily, we can reframe limiting stories through various techniques—like challenging overly negative interpretations of our abilities, or gaining perspective by looking at a difficult situation as an outsider or a close friend would—that can help us cope better with the stress that fear or anxiety inevitably brings.

Rather than seeing reframing as a “Pollyanna” approach that bypasses very real challenges in the world, reframing is about emotion regulation. It stops you from ruminating about what’s going wrong to the point of giving up. Reframes need not be wildly optimistic. For example, instead of saying, “I can’t,” you might say, “I’m at least willing to try”; “This is too overwhelming!” can become “Let me slow down, and take it one step at a time, to get through this.” This reframing process, which involves positive self-talk, can help you see results in your life—including a greater sense of capability and more positive emotion and optimism, which lead to greater resilience.

To truly live courageous lives, we need like-minded people around us who are also trying to honor the values of courage. Creating courageous communities gives us the support to face challenges. Sometimes our stories get in our way, and we need people who are doing similar work to help us see where we’re getting stuck or what we’re truly capable of.

Charles Duhigg, author of The Power of Habit, writes, “For most people who overhaul their lives, there are no seminal moments or life-altering disasters. There are simply communities—sometimes of just one other person—who make change believable.” Making change is simply easier when we have support.

To apply this to living with more courage, we need to examine our relationships and distinguish those that are rooted simply in convenience (such as meeting up with coworkers for a drink) from those where like-minded people share similar, courageous values such as kindness, vulnerability, optimism, and empathy. Relationships of convenience aren’t “bad,” but those other relationships are the ones that provide the most support to buffer you from the stress of taking a risk and going after big life changes. 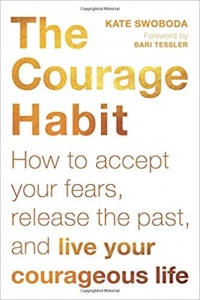 This essay is adapted from The Courage Habit: How to Accept Your Fears, Release the Past, and Live Your Courageous Life (New Harbinger, 2018, 232 pages).

As you become more practiced with accessing the body, you’ll find it easier to recognize your fear patterns at work. As you tune in to your fear by listening without attachment, you’ll find it easier to see what your fear is rooted in, and then use practices such as reframing limiting stories. Integrating more courage-based relationships into your life will help you to both notice those times when you’re getting stuck in old fear patterns, and remember your bigger vision of stepping into more courage and emotional resilience.

The more you interrupt the old fear-based habits and replace fear-based responses with responses to boost courage, the more you create a “courage habit.” By living your life with courage, you’ll be more likely to make the changes that will lead to greater fulfillment—whether that’s embarking on a new relationship or job, or helping to save the world.