Why do we feel shame and how does shame change us?

According to Brené Brown, a researcher at the University of Houston, shame is an “intensely painful feeling or experience of believing that we are flawed and therefore unworthy of love and belonging.”  It’s an emotion that affects all of us and profoundly shapes the way we interact in the world. But, depending on how we deal with it, shame can either shut us down or lead us to a new sense of bravery and authenticity.

Brown’s research involved interviewing thousands of people about difficult, sensitive experiences in their lives, in order to uncover common themes around shameful experiences. Almost single-handedly, she has launched a cultural conversation around the importance of vulnerability and courage in leading an authentic life. Her TED talk on the power of vulnerability is the fourth most popular talk of all time and has been viewed by over 23 million people, while her books are all bestsellers, including The Gifts of Imperfection and Daring Greatly.

I recently interviewed Brown by phone to find out more about her research and her latest book, Rising Strong. 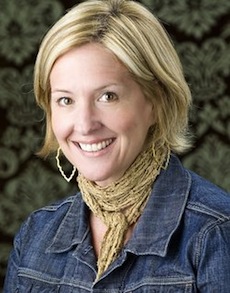 Jill Suttie: Why do you think it’s important to study shame and vulnerability?

Brené Brown: Because they are such a big part of our emotional landscape and daily experience. For shame, it’s about shining a light in some dark corners and normalizing some universal experiences that by definition make us feel very alone.

As for vulnerability, a lot of people believe that vulnerability is the center of dark and difficult emotions that we don’t want to feel; so they guard against it. The truth is that vulnerability is the center of all emotions. We’re emotional beings, and to understand our emotions is going to require a bit of uncertainty and risk. This goes back to the reason for my work: wrapping language around universal experiences so we can have conversations about what it means to be human.

JS: What do you mean by vulnerability being at the center of all emotion?

BB: Based on the research, I define vulnerability as uncertainty, risk and emotional exposure. When we feel dark emotions—when we feel grief or shame or fear, scarcity, disappointment—we feel risk and uncertainty, and we feel emotionally exposed and raw. But vulnerability is also the birthplace of love, joy, belonging, trust, intimacy, creativity, and all of the good things. If we’re practicing a guarded heart life, we’re pushing away the things we’re most desperate for.

JS: Do you think that from an evolutionary standpoint, shame had some positive function—maybe to keep us from acting out?

BB: From an evolutionary, biological perspective, shame probably served a function. But, I don’t think it serves that function well anymore, because it’s much too brutal an instrument to be an effective change agent for anything. I don’t see any persuasive data in my research saying that it’s a helpful tool for micro (individual) or macro change now. It’s more like a scarlet letter, used to literally cast out or shun someone who’s a threat to a community because they’re not adhering to the community’s model of behavior.

Neuro-biologically, we’re wired above all else for survival, and shame is a threat to connection, a threat to survival. It’s very hard to experience shame and not have a very limited response to it. Often shame is a cause of destructive behaviors—self-destructive and violent behaviors towards others. If the fear of shame worked as a deterrent to bad behavior, everyone would be healthy and loving. Instead, shame is highly correlated with things like addiction, depression, violence, and aggression.

JS: Can you talk about the difference between shame and guilt?

BB: The easiest way to separate shame from guilt is to say shame is “I’m bad” and guilt is “I did something bad.” Shame is a focus on self; guilt is a focus on behavior. An easy parenting example would be saying, “You’re stupid” versus “You’re a great kid that made a bad decision.” It’s very hard to get out from underneath shame because, if that’s who you are, what is the potential for change?

JS: Have you looked at any neurological studies at how shame looks in the brain?

BB: Studying shame is a struggle, because if you were really going to study shame, you would set up an environment where you understood what someone’s shame triggers were, shame them, and watch their behavior, which obviously we would never do. Having said that, there are some interesting studies around shame as social pain. Our brain registers the pain of shame exactly how it registers physical pain, which I think is fascinating.

JS: How do we usually behave when we feel shame?

BB: You’d really have to go back to the research of Linda Hartling and Jean Baker Miller, research coming out of the Stone Center at Wellesley College, that found three primary responses to shame: moving away, moving toward, and moving against it. Moving away in response to shame is where we disappear in our own lives, secret-keep, and don’t talk about it. Moving toward shame is the people-pleasing way out. Moving against it means using shame and aggression to fight back—you shame me, I come back at you with something hurtful, painful, or shaming.

In my work, we refer to these as “shame shields.” At the Stone Center they call these “strategies of disconnection,” which I think is so brilliant, because they are strategies for disconnecting from the pain of shame. All three strategies—and I’ve done all three—move you away from your authenticity and your real self. 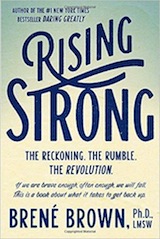 JS: Why should we engage with shame in the way you describe in your book when it’s so painful? What’s the benefit to that?

BB: Shame needs three things to grow exponentially: secrecy, silence, and judgment. Those are not authentic responses. So, dealing with shame while maintaining authenticity and cultivating more courage, connection, and compassion in your relationships is what’s needed. It’s a tall order. But one of the byproducts of being able to move through shame constructively is that people who come out the other side by default feel braver, more connected and compassionate.

JS: In Rising Strong, you write about the importance of people “rumbling” with their stories—meaning, engaging more with the messages they tell themselves and being more honest about their fears and foibles. Can you explain how rumbling, which I think sounds like a positive concept, is distinct from rumination, which can be a sign of depression or other problems?

BB: That’s a great question. Rumbling is really about reality-checking—having some critical awareness around the stories we make up, fact-finding, and getting curious around what we are feeling. Unlike ruminating, rumbling requires a degree of mindfulness. I think of ruminating as not being mindful, because you are over-identifying with something or ignoring stuff. But there is some goal-orientation in rumbling to find the truth of the story: what do I need to understand about myself, what’s really going on, what are my real limits, and what is the fiction part of my narrative and where is that coming from?

JS: Is your approach somehow different than mindfulness?

BB: I love Kristen Neff’s definition of mindfulness, which is to let ourselves lean into emotion but to not over-identify with it, to be present to what’s going on, but not be defined by it. You need to be mindful as part of the process; but I think the bigger piece, which I don’t think is incorporated by mindfulness, is emotional curiosity. Most of us were not raised in families where we were encouraged to get curious about our emotions, ask a lot of questions, dig in, name things. So emotional curiosity is a really big piece of what’s needed.

JS: Do you have advice for people who grew up in families where emotions were ignored or downplayed?

BB: I’m a big believer in therapy. I could not have done this work without a really great therapist. I don’t think we can do this work alone, because we were never meant to. It’s not how we’re wired. We’re wired for connection, from mirror neurons on down, and in the absence of connection, there’s suffering.  So, I think just starting small conversations with people we trust and care about and being honest about wanting to learn more and do more about our shame is a good step. It’s all about being in connection while we’re in this learning process.

JS: One thing that struck me in your book is how many people talked about shaming experiences in schools. What can be done to counteract that?

BB: Shame is still used as a primary classroom management tool. About 85 percent of the men and women we interviewed could remember something so shaming that happened to them in school that it forever changed how they thought of themselves as learners. And that’s staggering! But close to 90 percent of the people we interviewed could also name a specific teacher, administrator, or coach who instilled in them a sense of worthiness when they were struggling with that. I think this speaks to the power of coaches and teachers.

A lot of shaming in schools is not intentional and not meant to hurt students. But it’s important to talk about the alternatives to using it. When you can turn behavior around on a dime using shame—and you’ve got a crowded classroom and a lot of stress and pressures around test prepping—I think you have to have good alternatives. My husband is a pediatrician, and he often says that before you start talking to parents about discipline, you’ve got to make sure that you’re giving them tools that are effective to replace whatever you’re taking away.

JS: What do you hope people will most take away from your work?

BB: I hope more than anything that it starts a conversation. I hope my work helps people feel less alone and gives them the permission and the language to talk about the most important parts of being human—both the hard parts and the most beautiful parts.