Dinner at home was not on the menu when Jennifer Monahan planned her 10th wedding anniversary. But that was before the coronavirus pandemic drove hundreds of millions of couples around the globe indoors and into intensive togetherness, for better or for worse. 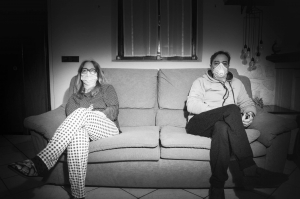 On April 10, she and her husband Brian instead raised a toast to their marriage from the confines of their shared living space. “Travel was out, and dinner in a nice restaurant was, um, off the table. So, we stayed in and had a nice home-cooked meal,” said Monahan, a communications manager at UC Berkeley’s School of Social Welfare.

Such are the lighter moments of love and marriage in tight quarters, though plenty of couples may soon be singing Dan Hicks’s “How can I miss you when you won’t go away?”

Intimate relationships can turn dark pretty fast under stay-at-home orders when decisions over whether to go for a run, make a trip to the grocery store, or have food delivered include a life-or-death component, said Berkeley psychologist Robert Levenson.

Not business as usual

Levenson, a veteran scholar of long-term relationships, has tracked the psychological and physiological changes in more than 150 middle-aged and older couples in the San Francisco Bay Area for 30 years.

Today, in the face of COVID-19, the frustrations couples normally express in counseling sessions—such as financial worries, the division of chores, intimacy or a lack thereof, and conflicting views on childrearing—are taking a scarier turn.

“People are asking themselves, ‘What if I get sick?’ ‘What if my partner gets sick?’ ‘What if we can’t get enough food?’ ‘What if we lose a job?’ ‘What if the world order crumbles, and it doesn’t feel safe to be out in the street?’” Levenson said. “This is a crucible that people are being thrust into, and it’s just not business as usual.”

More than 20 percent of the global population is currently under lockdown. Unlike World War II, which gave way to the baby-boom generation, demographers agree the 2020 coronavirus pandemic is more apt to drive up divorce rates than birth rates, as can be gauged in parts of China where the first COVID-19 cases were detected, and severe shutdowns were enforced.

For highly sensitive people, spousal lockdown can feel viscerally excruciating, as familiar routines are disrupted and irritations fester over how one or the other partner eats, breathes, sleeps, and generally goes about their business. Add children to the mix, and tempers can explode.

“A lot of adults are struggling right now with lowered productivity, given the remote work situation, and—if they’re parents—with having kids afoot and having to homeschool them,” said Serena Chen, a psychology professor at Berkeley who studies the benefits of self-compassion in relationships.

Beating yourself up for feeling bad about feeling bad is counterproductive, said Iris Mauss, an associate professor of psychology at Berkeley.

“Everyone right now is experiencing some form of stress. And while these responses are incredibly common, many people negatively judge themselves for having them,” Mauss said.

“Research shows that the more we allow ourselves to feel negative emotions, the quicker they resolve themselves, and the less toxic they are.”

Berkeley psychologist and Greater Good Science Center founding director Dacher Keltner, an expert on the science of emotions, recommends couples do their best to avoid the behaviors listed in psychologist John Gottman’s Four Horsemen of the Apocalypse: criticism, contempt, defensiveness and stonewalling.

But that’s a tall order, especially when one partner is hypervigilant about COVID-19, while the other is laissez-faire.

When partners get polarized, both need to take a giant step back and figure out how to meet each other halfway, said psychologist Arthur Aron, a researcher at Berkeley’s Institute of Personality and Social Research. He and his wife Elaine developed the famous 36 questions to accelerate intimacy.

“For example, my partner is highly sensitive. She notices the things I miss. But I can take on the things that she may find hard to take on, so we work together as a team,” said Aron, who is also a research professor at Stony Brook University in New York.

Still, there’s no question that the stress of being cooped up together for an indefinite period “amplifies the fault lines that already exist in a relationship,” said Philip Cowan, a professor emeritus of psychology at Berkeley.

Plus, old disagreements that a couple thought they had resolved can suddenly return, said his wife, Carolyn Pape Cowan, a Berkeley professor emerita of psychology.

“Couples may disagree about what their kids should be allowed to do during shelter-in-place measures, when so much is at stake,” Pape Cowan said. “And those conflicts may go back to when they had their first baby, and one parent wanted to pick up and comfort the crying infant, while the other thought that picking up the baby would spoil him.”

For four decades, the Cowans, both clinical psychologists, have conducted and supervised large-scale studies and therapeutic interventions for more than 1,000 couples, many of whom are low-income.

Job losses, poor access to health care, and competition for scarce resources will make their lives harder than they already are. “These families have more intense stresses and less patience, when it comes to talking,” Pape Cowan said. “It’s going to be very hard for them.”

Jeffrey Edleson, a UC Berkeley professor and dean emeritus of social welfare, and leading expert on domestic violence dynamics and prevention, wholeheartedly concurs. “Given the dramatic increase in unemployment, especially among those in lower-income brackets in our country, it is likely that family violence is also increasing. This combined with the ‘safe at home’ orders creates a highly combustible situation at home for many,” he said.

Levenson predicts that, while the COVID-19 pandemic will break a lot of relationships, it will make others stronger—but only if couples are prepared for the hard work ahead.

“For most of us, this is going to be one of the single, defining social moments in our relationship. It will be like 9/11, but longer,” Levenson said. “It’s a lot like that very challenging stage of a relationship when you first move in together after dating, and you’re discovering things about yourself and your partner as a couple that are really important building blocks for the kind of life you’re going to have together.”