Six years ago, a landmark study found that money did improve subjective well-being, but only up to a point: Above an annual household income of around $75,000, found the Princeton researchers, more money wouldn’t buy more happiness.

But that doesn’t mean how people (of all income levels) spend their money is irrelevant. 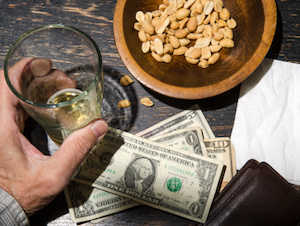 In fact, a recent wave of research suggests that money can buy happiness—if we spend it in the right ways. Dishing out cash for experiences rather than material goods can give us a boost, as can spending on other people. And we’ll get the biggest happiness bang for our (literal) buck if we indulge in many small treats rather than a few big splurges.

Now, a new paper published in Psychological Science suggests that money can also buy happiness when we spend it on products that fit our personality.

In an initial study, University of Cambridge researchers analyzed six months’ worth of checking account transactions made by 625 customers of a UK bank. Transactions were separated into 59 categories, from gardening to coffee shops, accounting to dentists. Each of those categories got a score (from a separate group of people) for each of the Big Five personality traits. For example, spending on charities might reflect conscientiousness and agreeableness, while spending on tourism might reflect openness to experience and extraversion. Participants also rated their satisfaction with life.

Across more than 76,000 transactions, the researchers found that participants with a better match between their personality and their purchases were more satisfied with life. This link was even stronger than those between total income or total spending and life satisfaction, and it held even after controlling for income, age, and gender.

The researchers suggest that this fit between personality and purchases reflects a form of authentic self-expression.

“Money enables us to lead a life we want,” says lead author Sandra Matz, a PhD student at the University of Cambridge. She and her coauthors explain that “psychological fit helps individuals to act in line with their most fundamental needs and preferences as well as to express themselves in a way that maintains and enhances their self-concepts.” Previous studies have found that people are happier in jobs and even neighborhoods that fit their personality.

Yet it’s possible that something else was influencing spending and life satisfaction: Perhaps people who are more reflective and in tune with their own needs both felt more satisfied and spent more on fitting products. This is an objection that the researchers set out to tackle in a second study, which asked: If we give people money to spend on something that fits their personality, will they actually get happier? This kind of experiment could show causality: a direct path from fitting spending to happiness.

In this new study, researchers offered 79 introverts and extraverts a $10 voucher to spend either at a bookstore or a bar. Participants reported on their positive and negative emotions before the experiment began and then several times during the course of getting the voucher, making a purchase, and consuming it.

When there was personality-spending fit—when introverts were sent to a bookstore or extraverts to a bar—happiness levels went up. When there was a mismatch, participants’ happiness either stayed the same or decreased. Psychological fit seemed particularly crucial for introverts, who were much happier buying a book; extraverts, in cheerful outgoing fashion, seemed relatively content with either purchase.

According to Cornell University professor Tom Gilovich, who is known for his work on experiential spending and happiness, the interplay between personality and environment can be quite complex. Maybe the extraverts were able to turn book buying into a gregarious experience, chatting with other customers or selecting exciting reading material. Meanwhile, the introverts at the bar—some distressed by crowds and loud music—may not only have felt out of place, but inadequate as well. As Gilovich points out, introverts have more shame about their personality, sometimes worrying that they don’t live up to society’s expectations for effusion and friendliness.

In future research, Matz hopes to address some of these dynamics and further investigate how this effect works. Why, for instance, doesn’t everyone consistently spend in ways that fit their personality? Consumption can activate our desire to be liked and respected by others; but if our personality isn’t ideal, according to society—if we are introverted, for instance, or less agreeable—we may be pressured to buy what we’re expected to buy rather than what we truly want. Future research could examine whether people with society-approved personalities benefit more from fitting spending, and what that means for those of us who aren’t so “ideal.”

So the next time you’re choosing between a sports car or minivan, exercise class or knitting class, you might consciously consider whether you want to push yourself out of your comfort zone—or find something that fits your personality.