Parents: Do you want to raise a child with a strong sense of right and wrong? You might want to start by cultivating your own morality—as well as your own empathy.

A new study from the University of Chicago suggests that parents’ sensitivity to both other people’s feelings and to injustice may influence early moral development in their children. 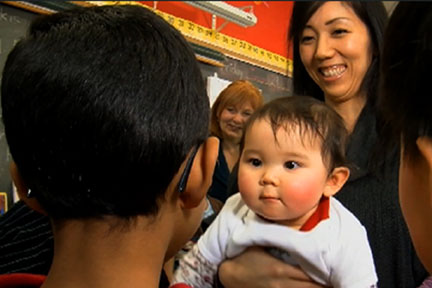 Developmental neuroscientist Jean Decety and his colleague, Jason Cowell, brought a group of one year olds into the lab to test them on their reactions to moral situations. The seventy-three toddlers watched animated videos in which characters engaged in helping and sharing (prosocial) behaviors or pushing, tripping, and shoving (antisocial) behaviors while the researchers monitored the toddlers’ eye movements and measured their brain wave patterns using an electroencephalogram, or EEG.

Afterwards, the researchers offered the children toy figures representing the two “good” and “bad” onscreen characters and noted which the toddlers preferred, based on their reaching behavior. The toddlers also played a sharing game, in which they were given two toys to play with and then an asked to share one.

Prior to the experiment, the children’s parents filled out questionnaires measuring their values regarding empathy, justice, and fairness. The parents also answered questions about their children’s observed temperaments, as well as giving general demographic information.

Results of the researchers’ analyses showed that all the toddlers experienced different brain-wave patterns when witnessing pro-social versus antisocial behavior, and they tracked pro-social characters with their eyes longer—a finding that replicates other studies suggesting that kids, even from a young age, seem to prefer moral characters.

Yet, those differences in brain wave patterns for good and bad characters didn’t translate into toddlers reaching for the pro-social toy figure—in fact, just as many reached for the antisocial toy.

Instead, the toddlers who preferred the “good” toy had a distinct brain wave pattern in their EEG—one that included larger spikes of activity at the 400-millisecond-mark post-witnessing the animated good and bad behavior. And, in later analyses, the researchers discovered that this distinct spike in activity was predicted by the parents’ sensitivity to justice—a finding that surprised Decety.

“All babies make a distinction between good and bad—this has been shown by many studies,” he says. “But, this second response in the brain, the one that’s sensitive to a parent’s views toward justice, we think it is connected with more complex types of reasoning.”

The spike in brain activity seems to indicate that the toddlers are appraising, rather than just paying attention to, the good and bad behavior they’ve seen, says Decety. Still, how a parent’s views could impact that process isn’t clear at all. Decety speculates that it may be because of genetics and biology, or perhaps a combination of influences from the baby’s social environment and the genes passed down to them.

“As we’ve learned over the last 50 years of research, it’s almost never just one or the other,” says Decety. “It’s almost always an interaction between the two.”

Parental dispositions also seemed to impact sharing in the toddlers. The researchers found that higher levels of parental cognitive empathy, or the ability to take someone else’s perspective, as well as higher levels of baby self-regulation—their ability to soothe themselves, for example—predicted increased sharing behavior in the sharing game. While it makes some sense that babies who can self-soothe would be better at sharing—after all, says Decety, sharing is hard for babies, so soothing themselves could mitigate the emotional upset—it’s less clear how parental empathy impacts this behavior. Again, it could be genetic, or socially-influenced, or both. 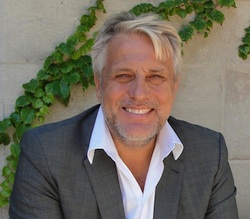 Either way, it appears that the building blocks of moral behavior—reaching out to good people and being willing to share with others—are somewhat idiosyncratic and not equal in all kids. This goes against some of the current thinking on moral development, says Decety.

“Usually when you read developmental studies, it seems as if all babies are alike,” he says. “But our study shows that how morality develops is a little more sophisticated, more nuanced than we thought. Even at this very early age, we see these individual differences.”

Perhaps surprisingly, parental emotional empathy—the ability to share the emotions of another person—did not seem to influence sharing behavior in their toddlers. However, this finding does mirror some of Decety’s other research with adults, which found cognitive rather than emotional empathy predicts their sense of morality, justice, and fairness.

Of course, this is only one study. But Decety will soon be analyzing results from another study measuring brain wave patterns in toddlers witnessing acts of fairness and unfairness. And he hopes to analyze DNA samples from parents to see if there may be a genetic component that accounts for differences in how babies react to moral situations.

His goal is to better understand the mechanisms involved in moral development so that, eventually, we might shape its trajectory in positive ways.

“If we want our kids to be sensitive to justice—which I believe we do, if we want to live together in peace—and it turns out that the way that we handle or care for our kids can affect their sense of justice from very early on, then we will want to pay attention to that,” he says. “That’s good for everybody, for the world.”