Mobile phones are ubiquitous. Stand in line at any grocery store or sit in any hospital waiting room, and you see people staring at their phones, presumably catching up on news or work or just relieving their boredom. 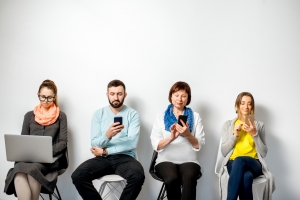 This seems innocuous enough. But could being on our phones affect our ability to connect with the people around us? A new study aimed to answer that question.

Researcher Kostadin Kushlev and his colleagues asked pairs of college students, who were strangers to each other, to come into a small lab waiting room—either with or without their phones. They were given no other instructions, but were told the researchers were running a bit late and they needed to wait. While waiting, their faces were secretly videotaped. Afterwards, the students reported how they felt and how much they interacted with the other participant, if at all.

Independent coders studied videotapes of the faces of pairs who interacted, measuring how often they smiled, how genuine the smiles were, and how much of the time they spent smiling during their wait. The results? People with phones exhibited fewer smiles overall (and fewer genuine smiles), and spent 30 percent less of the time smiling than people who didn’t have their phones with them, signaling less interest in connecting with others.

“Smiling is a really powerful social lubricant. When somebody smiles at you, that indicates approachability,” says Kushlev. “Our research suggests that phones might actually be impeding this very important approach-related behavior that serves to create new social ties.”

What a smile does

Why would people smile less when they have their phones?

Kushlev isn’t sure, but his prior research has found that people with phones find their interactions less enjoyable and less meaningful. The same may have been true in this situation, though the participants didn’t report feeling significantly worse off after their waiting period was over—maybe not a surprise, given that the wait was only 10 minutes. Still, smiling is an unbiased, measurable indicator of happiness, perhaps more reliable than filling out a survey.

Besides indicating happiness, a smile also communicates to others that you’re interested in them and trustworthy. So, if phones make us smile less when we’re out and about in public, it could thwart our ability to form “weak ties”—connections with neighbors, colleagues, and other non-intimates in our community—that have been shown to have a profound effect on our health and happiness.

“Phones might actually have an effect on well-being because we know that interacting, even with strangers, and just having random interactions improves our well-being and makes us feel more connected,” says Kushlev.

Though his experiment was designed only to analyze smiling in pairs, Kushlev and his colleagues also noted that thirty-two participants with phones didn’t interact at all in the waiting room—while only six people without phones didn’t interact. That lends credence to the hypothesis that there’s something about having a phone with you that impedes connection with strangers overall.

This is not the first study to find that phones have pernicious impact on social interactions.

Indeed, some past research has shown that phones interfere with social conversation and our capacity to engage in activities requiring cognitive focus, which could affect our motivation to engage. Kushlev believes that looking down at our phones could be what explains these results, because looking down sends a signal of disinterest and stalls conversations. Or, he says, it could be that cell phone use drains our cognitive capacity so that we’re less able to follow conversations or to interpret others’ social signals.

How phones are changing our relationships

Does this mean we should eschew our phones whenever we’re out and about? Maybe not, says Kushlev.

“There’s lots of research that shows phones can help people meet basic psychological needs, maybe make you feel competent, and that can be good for well-being,” he says. In his study, he argues, people might have chosen to talk to a friend or to read an article that could have made them happier, if they’d known how long they’d be waiting.

He’s not advocating that phones are bad or social impediments, in general. In fact, he says, they can sometimes help us form and improve social ties, like when we use dating apps like Tinder to meet people or when we use them to connect with family who are far away. But he does think that pulling out your phone in public can often be a cop-out, done to avoid any potential awkwardness that can occur in socializing with strangers.

“It’s this intermittent use of cell phones that can be a problem—where you look at your phone, the conversation doesn’t go anywhere, and you’re sending a signal that there are more important things to do than to talk to someone else,” he says.

Instead of relying on your phone to distract you from discomfort, he suggests turning off notifications or using apps that determine what messages you see when you’re out in public. That way, you don’t miss out on what’s going on around you or on making new connections. You can still use cell phones wisely, he argues, if you better understand their upsides and downsides and take steps to manage them better.