What happens when we become too dependent on our mobile phones? According to MIT sociologist Sherry Turkle, author of the new book Reclaiming Conversation, we lose our ability to have deeper, more spontaneous conversations with others, changing the nature of our social interactions in alarming ways. 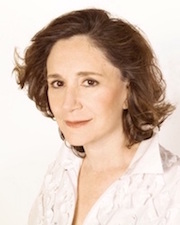 Turkle has spent the last 20 years studying the impacts of technology on how we behave alone and in groups. Though initially excited by technology’s potential to transform society for the better, she has become increasingly worried about how new technologies, cell phones in particular, are eroding the social fabric of our communities.

In her previous book, the bestselling Alone Together, she articulated her fears that technology was making us feel more and more isolated, even as it promised to make us more connected. Since that book came out in 2012, technology has become even more ubiquitous and entwined with our modern existence. Reclaiming Conversation is Turkle’s call to take a closer look at the social effects of cell phones and to re-sanctify the role of conversation in our everyday lives in order to preserve our capacity for empathy, introspection, creativity, and intimacy.

I interviewed Turkle by phone to talk about her book and some of the questions it raises. Here is an edited version of our conversation.

Jill Suttie: Your new book warns that cell phones and other portable communication technology are killing the art of conversation. Why did you want to focus on conversation, specifically?

Sherry Turkle: Because conversation is the most human and humanizing thing that we do. It’s where empathy is born, where intimacy is born—because of eye contact, because we can hear the tones of another person’s voice, sense their body movements, sense their presence. It’s where we learn about other people. But, without meaning to, without having made a plan, we’ve actually moved away from conversation in a way that my research was showing is hurting us.

JS: How are cell phones and other technologies hurting us?

ST: Eighty-nine percent of Americans say that during their last social interaction, they took out a phone, and 82 percent said that it deteriorated the conversation they were in. Basically, we’re doing something that we know is hurting our interactions.

I’ll point to a study. If you put a cell phone into a social interaction, it does two things: First, it decreases the quality of what you talk about, because you talk about things where you wouldn’t mind being interrupted, which makes sense, and, secondly, it decreases the empathic connection that people feel toward each other.

So, even something as simple as going to lunch and putting a cell phone on the table decreases the emotional importance of what people are willing to talk about, and it decreases the connection that the two people feel toward one another. If you multiply that by all of the times you have a cell phone on the table when you have coffee with someone or are at breakfast with your child or are talking with your partner about how you’re feeling, we’re doing this to each other 10, 20, 30 times a day.

JS: So, why are humans so vulnerable to the allure of the cell phone, if it’s actually hurting our interactions?

ST: Cell phones make us promises that are like gifts from a benevolent genie—that we will never have to be alone, that we will never be bored, that we can put our attention wherever we want it to be, and that we can multitask, which is perhaps the most seductive of all. That ability to put your attention wherever you want it to be has become the thing people want most in their social interactions—that feeling that you don’t have to commit yourself 100 percent and you can avoid the terror that there will be a moment in an interaction when you’ll be bored.

Actually allowing yourself a moment of boredom is crucial to human interaction and it’s crucial to your brain as well. When you’re bored, your brain isn’t bored at all—it’s replenishing itself, and it needs that down time.

We’re very susceptible to cell phones, and we even get a neurochemical high from the constant stimulation that our phones give us. 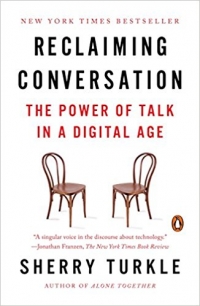 I’ve spent the last 20 years studying how compelling technology is, but you know what? We can still change. We can use our phones in ways that are better for our kids, our families, our work, and ourselves. It’s the wrong analogy to say we’re addicted to our technology. It’s not heroin.

JS: One thing that struck me in your book was that many people who you interviewed talked about the benefits of handling conflict or difficult emotional issues online. They said they could be more careful with their responses and help decrease interpersonal tensions. That seems like a good thing. What’s the problem with that idea?

ST: It was a big surprise when I did the research for my book to learn how many people want to dial down fighting or dealing with difficult emotional issues with a partner or with their children by doing it online.

But let’s take the child example. If you do that with your child, if you only deal with them in this controlled way, you are basically playing into your child’s worst fear—that their truth, their rage, their unedited feelings, are something that you can’t handle. And that’s exactly what a parent shouldn’t be saying to a child. Your child doesn’t need to hear that you can’t take and accept and honor the intensity of their feelings.

People need to share their emotions—I feel very strongly about this. I understand why people avoid conflict, but people who use this method end up with children who think that the things they feel aren’t OK. There’s a variant of this, which is interesting, where parents give their children robots to talk to or want their children to talk to Siri, because somehow that will be a safer place to get out their feelings. Again, that’s exactly what your child doesn’t need.

JS: Some studies seem to show that increased social media use actually increases social interaction offline. I wonder how this squares with your thesis?

Another person who might be helped by social media is someone who uses it for taking baby steps toward meeting people for face-to-face conversations. If you’re that kind of person, I’m totally supportive.

I’m more concerned about people for whom social media becomes a kind of substitute, who literally post something on Facebook and just sit there and watch whether they get 100 likes on their picture, whose self-worth and focus becomes dictated by how they are accepted, wanted, and desired by social media.

And I’m concerned about the many other situations in which you and I are talking at a dinner party with six other people, and everyone is texting at the meal and applying the “three-person rule”—that three people have to have their heads up before anyone feels it’s safe to put their head down to text. In this situation, where everyone is both paying attention and not paying attention, you end up with nobody talking about what’s really on their minds in any serious, significant way, and we end up with trivial conversations, not feeling connected to one another.

ST: In the workplace, you need to create sacred spaces for conversation because, number one, conversation actually increases the bottom line. All the studies show that when people are allowed to talk to each other, they do better—they’re more collaborative, they’re more creative, they get more done.

It’s very important for companies to make space for conversation in the workplace. But if a manager doesn’t model to employees that it’s OK to be off of their email in order to have conversation, nothing is going to get accomplished. I went to one workplace that had cappuccino machines every 10 feet and tables the right size for conversation, where everything was built for conversation. But people were feeling that the most important way to show devotion to the company was answering their email immediately. You can’t have conversation if you have to be constantly on your email. Some of the people I interviewed were terrified to be away from their phones. That translates into bringing your cell phone to breakfast and not having breakfast with your kids.

JS: If technology is so ubiquitous yet problematic, what recommendations do you make for keeping it at a manageable level without getting so hooked?

ST: The path ahead is not a path where we do without technology, but of living in greater harmony with it. Among the first steps I see is to create sacred spaces—the kitchen, the dining room, the car—that are device-free and set aside for conversation. When you have lunch with a friend or colleague or family member, don’t put a phone on the table between you. Make meals a time when you are there to listen and be heard.

When we move in and out of conversations with our friends in the room and all the people we can reach on our phones, we miss out on the kinds of conversations where empathy is born and intimacy thrives. I met a wise college junior who spoke about the “seven-minute rule”: It takes seven minutes to know if a conversation is going to be interesting. And she admitted that she rarely was willing to put in her seven minutes. At the first “lull,” she went to her phone. But it’s when we stumble, hesitate, and have those “lulls” that we reveal ourselves most to each other.

So allow for those human moments, accept that life is not a steady “feed,” and learn to savor the pace of conversation—for empathy, for community, for creativity.