How do pandemics change our societies? It is tempting to believe that there will not be a single sector of society untouched by the COVID-19 pandemic. However, a quick look at previous pandemics in the 20th century reveals that such negative forecasts may be vastly exaggerated. 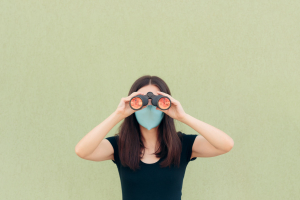 Prior pandemics have corresponded to changes in architecture and urban planning, and a greater awareness of public health. Yet the psychological and societal effects of the Spanish flu, the worst pandemic of the 20th century, were later perceived as less dramatic than anticipated, perhaps because it originated in the shadow of WWI. Austrian psychoanalyst Sigmund Freud described Spanish flu as a “Nebenschauplatz”—a sideshow in his life of that time, even though he eventually lost one of his daughters to the disease. Neither do we recall much more recent pandemics: the Asian flu of 1957 and the Hong Kong flu from 1968.

Imagining and planning for the future can be a powerful coping mechanism to gain some sense of control in an increasingly unpredictable pandemic life. Over the past year, some experts proclaimed that the world after COVID would be a completely different place, with changed values and a new map of international relations. The opinions of oracles who were not downplaying the virus were mostly negative. Societal unrest and the rise of totalitarian regimes, stunted child social development, mental health crises, exacerbated inequality, and the worst economic recession since the Great Depression were just a few worries discussed by pundits and on the news.

Other predictions were brighter—the disruptive force of the pandemic would provide an opportunity to reshape the world for the better, some said. To complement the voices of journalists, pundits, and policymakers, one of us (Igor Grossmann) embarked on a quest to gather opinions from the world’s leading scholars on behavioral and social science, founding the World after COVID project.

The World after COVID project is a multimedia collection of expert visions for the post-pandemic world, including scientists’ hopes, worries, and recommendations. In a series of 57 interviews, we invited scientists, along with futurists, to reflect on the positive and negative societal or psychological change that might occur after the pandemic, and the type of wisdom we need right now. Our team used a range of methodological techniques to quantify general sentiment, along with common and unique themes in scientists’ responses.

The results of this interview series were surprising, both in terms of the variability and ambivalence in expert predictions. Though the pandemic has and will continue to create adverse effects for many aspects of our society, the experts observed, there are also opportunities for positive change, if we are deliberate about learning from this experience.

Scientists’ opinions about positive consequences were highly diverse. As the graph shows, we identified 20 distinct themes in their predictions. These predictions ranged from better care for elders, to improved critical thinking about misinformation, to greater appreciation of nature. But the three most common categories concerned social and societal issues. 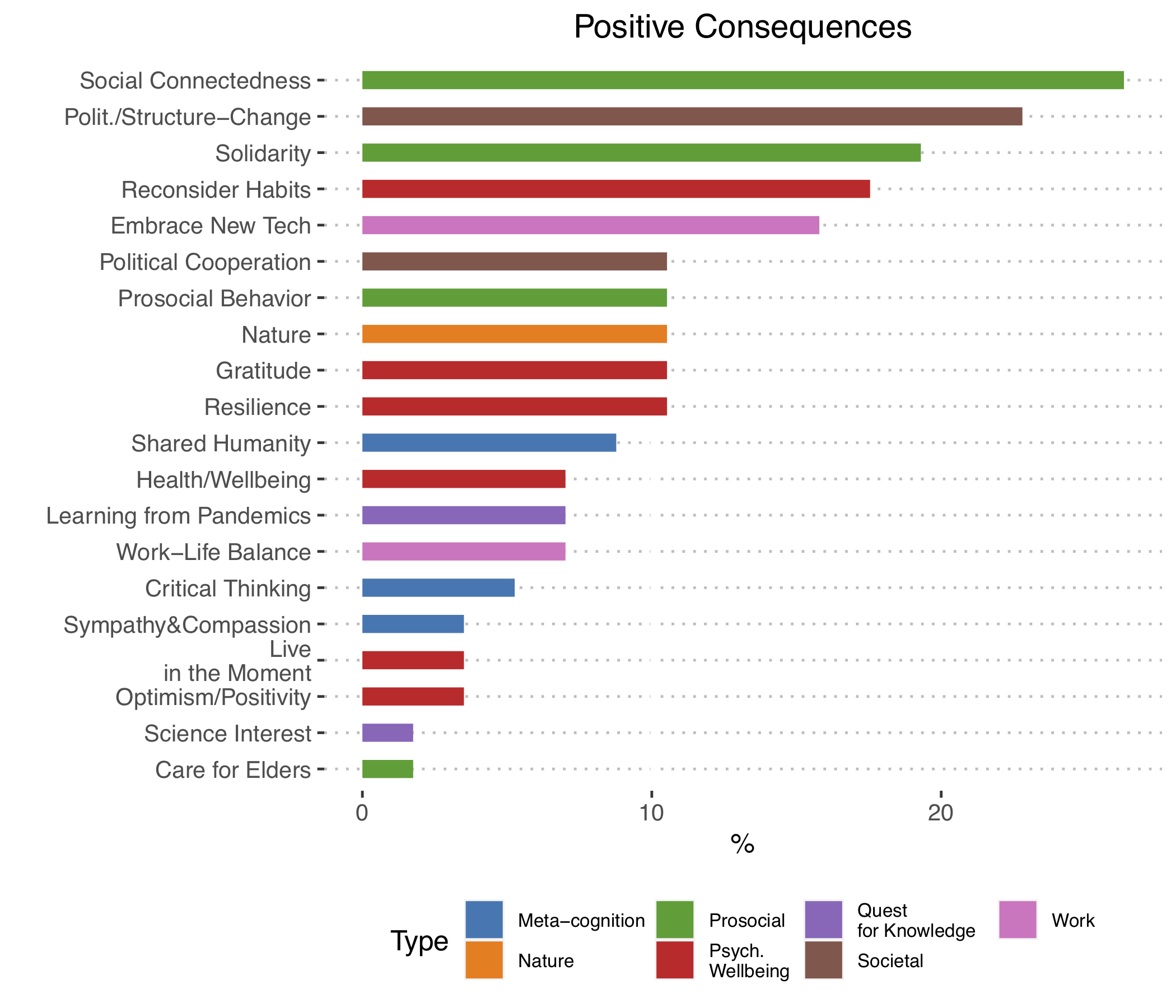 1. Solidarity. Experts predicted that the shared struggles and experiences that we face due to the pandemic could foster solidarity and bring us closer together, both within our communities and globally. As clinical psychologist Katie A. McLaughlin from Harvard University pointed out, the pandemic could be “an opportunity for us to become more committed to supporting and helping one another.”

Similarly, sociologist Monika Ardelt from the University of Florida noted the possibility that “we realize these kinds of global events can only be solved if we work together as a world community.” Social identities—such as group memberships, nationality, or those that form in response to significant events such as pandemics or natural disasters—play an important role in fostering collective action. The shared experience of the pandemic could help foster a more global, inclusive identity that could promote international solidarity.

2. Structural and political changes. Early in the pandemic, experts also believed that we might also see proactive efforts and societal will to bring about structural and political changes toward a more just and diversity-inclusive society. Experts observed that the pandemic had exposed inequalities and injustices in our societies and hoped that their visibility might encourage societies to address them.

Philosopher Valerie Tiberius from the University of Minnesota suggested that the pandemic might bring about an “increased awareness of our vulnerability and mutual dependence.”

Fellow of the Royal Institute for International Affairs in the U.K. Anand Menon proposed that the pandemic might lead to growing awareness of economic inequality, which could lead to “greater sustained public and political attention paid to that issue.” Cultural psychologist Ayse Uskul from Kent University in the U.K. shared this sentiment and predicted that this awareness “will motivate us to pick up a stronger fight against the unfair distribution of resources and rights not just where we live, but much more globally.”

3. Renewed social connections. Finally, the most common positive consequence discussed was that we might see an increased awareness of the importance of our social connections. The pandemic has limited our ability to connect face to face with friends and families, and it has highlighted just how vulnerable some of our family members and neighbors might be. Greater Good Science Center founding director and UC Berkeley professor Dacher Keltner suggested that the pandemic might teach us “how absolutely sacred our best relationships are” and that the value of these relationships would be much higher in the post-pandemic world. Past president of the Society of Evolution and Human Behavior Douglas Kenrick echoed this sentiment by predicting that “tighter family relationships would be the most positive outcome of this [pandemic].”

Similarly, Jennifer Lerner—professor of decision-making from Harvard University—discussed how the pandemic had led people to “learn who their neighbors are, even though they didn’t know their neighbors before, because we’ve discovered that we need them.” These kinds of social relationships have been tied to a range of benefits, such as increased well-being and health, and could provide lasting benefits to individuals.

How about predictions for negative consequences of the pandemic? Again, opinions were variable, with more than half of the themes were mentioned by less than 10% of our interviewees. Only two predictions were mentioned by at least ten experts: the potential for political unrest and increased prejudice or racism. These predictions highlight a tension in expert predictions: Whereas some scholars viewed the future bright and “diversity-inclusive,” others fear the rise in racism and prejudice. Before we discuss this tension, let us examine what exactly scholars meant by these two worries. 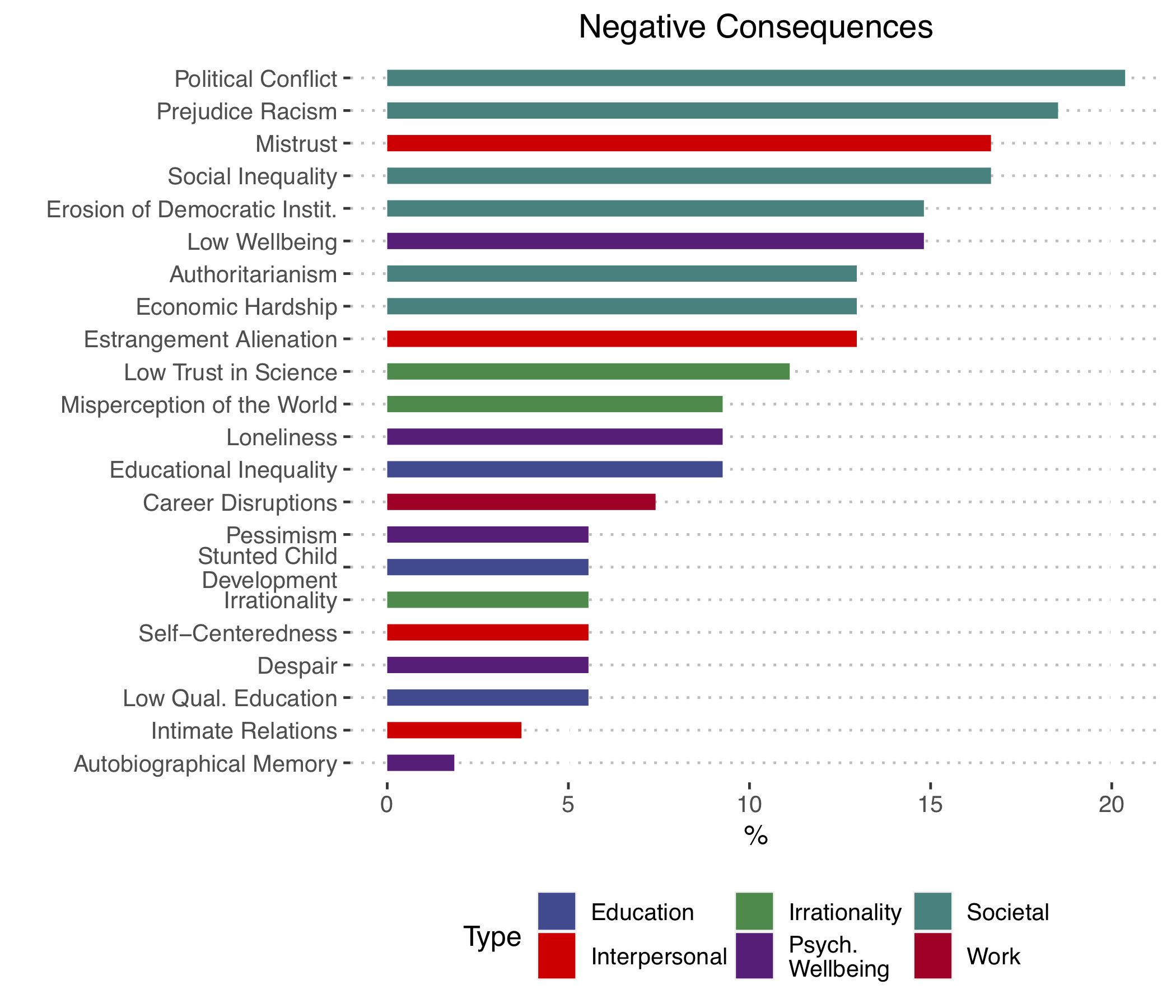 1. Increased prejudice or racism. Many experts discussed how the conditions brought about by the pandemic could lead us to focus on our in-group and become more dismissive of those outside our circles. Incheol Choi, professor of cultural and positive psychology from Seoul National University, discussed that his main area of concern was that “stereotypes, prejudices against other group members might arise.” Lisa Feldman Barrett, fellow of the American Academy of Arts & Sciences and the Royal Society of Canada, echoed this sentiment, noting that previous epidemics saw “people become more entrenched in their in-group and out-group beliefs.”

2. Political unrest. Similarly, many experts discussed how a greater focus on our in-groups might also exacerbate existing political divisions. Past president of the Society for Philosophy and Psychology Paul Bloom discussed how a greater dismissiveness toward out-groups was visible both within countries and internationally, where “countries are blaming other countries and not working together enough.” Dilip Jeste, past president of the American Psychiatric Association, discussed his concerns that the tendency to view both candidates and supporters as winners and losers in elections could mean that the “political polarization that we are observing today in the U.S. and the world will only increase.”

These predictions were not surprising—pundits and other public figures have been discussing these topics, too. However, as we analyzed and compared predictions for positive and negative consequences, we found something unexpected.

The yin and yang of COVID’s effects

Almost half of the interviewees spontaneously mentioned that the same change could be a force for good and for bad. In other words, they were dialectical, recognizing the multidetermined nature of predictions and acknowledging that context matters—context that determines who may be the winners and losers in the years to come. For example, experts predicted that we may see greater acceptance of digital technologies at home and at work. But besides the benefits of this—flexible work schedules, reduced commutes—they also mentioned likely costs, such as missing social information in virtual communication and disadvantages for people who cannot afford high-speed internet or digital devices.

Amid this complexity, experts weighed in on what type of wisdom we need to help bring about more positive changes ahead. Not only do we need the will to sustain political and structural change, many argued, but also a certain set of psychological strategies promoting sound judgment: perspective taking, critical thinking, recognizing the limits of our knowledge, and sympathy and compassion.

In other words, experts’ recommended wisdom focuses on meta-cognition, which underlies successful emotion regulation, mindfulness, and wiser judgment about complex social issues. The good news is that these psychological strategies are malleable and trainable; one way we can cultivate wisdom and perspective, for example, is by adopting a third-person, observer perspective on our challenges.

On the surface, the “it depends” attitude of many experts about the world after COVID may be dissatisfying. However, as research on forecasting shows, such a dialectical attitude is exactly what distinguishes more accurate forecasters from the rest of the population. Forecasting is hard and predictions are often uncertain and likely wrong. In fact, despite some hopes for the future, it is equally possible that the change after the pandemic will not even be noticeable. Not because changes will not happen, but because people quickly adjust to their immediate circumstances.

The future will tell whether and how the current pandemic has altered our societies. In the meantime, the World after COVID project provides a time-stamped window into experts’ apartments and their minds. As we embrace another pandemic spring, these insights can serve as a reminder that the pandemic may lead not only to worries but also to hopes for the years ahead.