“Any man can withstand adversity; if you want to test his character, give him power.” — Abraham Lincoln

I recently watched the movie adaptation of the Stanford Prison Experiment. Like most reviewers, I found it harrowing. But as a psychologist, I also found it revealing. With my eyes glued to the screen in rapt attention, heart racing, I became obsessed with understanding what really was going on, and the lessons we can glean from such an experiment gone so horribly wrong.

The standard story, given by the experimenter Phillip Zimbardo, is that the experiment is a lesson about how everyday people (and groups consisting of everyday people), when given too much power, can become sadistic tyrants. In a recent article for The New Yorker, Maria Konnikova casts some doubt on that conclusion, arguing that the real lesson is the power of institutions to shape behavior, and how people are shaped by those preexisting expectations.

While this is certainly a valuable lesson, I believe another crucial variable at play—rarely mentioned by commentators of the prison experiment or even in psychology textbooks—is the person. Yes, power corrupts. But power does not corrupt everyone equally.

There’s no way the small group of participants in the Stanford Prison Experiment represented the full range of human personality variation. For one, these were young males. Already, there is going to be higher levels of testosterone, on average, than most other populations. But there’s also the issue that these participants actively sought out participation in a study having to do with prison. Research published in 2007 found that people who responded to an ad to be part of a study on “prison life” scored higher on tests of aggressiveness, authoritarianism, machiavellianism, narcissism, and social dominance, and lower on measures of empathy and altruism.

But even among the small sample of young male participants in the Stanford Prison Experiment, there was great variability in how people responded to power. Some guards were particularly cruel, whereas others could barely take the cruelty and offered to go on errands, while still others were actively kind to the prisoners, fulfilling their requests. Let’s also not forget the hero of the film, Zimbardo’s graduate student Christina Maslach, who recoiled in horror at the sight of how the participants were treated in the experiment.

I fear it’s all too easy for us to focus our attention on that one loud, brash person who abuses power while ignoring the majority who were not nearly as cruel. Zimbardo has remarked that he was afraid he would be in for a very long and boring experiment. I suspect that if “Cool Hand Luke” didn’t sign up for the experiment, the experiment would indeed have lasted the full two weeks. People would have generally followed the rules, and we probably wouldn’t have had a movie made after it. 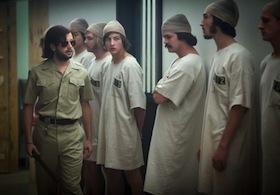 A scene from the 2015 film, Stanford Prison Experiment.

Since the Stanford Prison Experiment, we’ve learned a lot more about the psychology of power. Here’s something we’ve found: power isn’t inherently good or evil.

But these are not necessarily bad outcomes. Put to good use, power can have an incredibly positive effect on people. There are so many compassionate teachers, bosses, politicians, humanitarians, and others who wield power, who genuinely want to make the world a better place.

I think a really important point here is that power amplifies the person. It gives already existing personality dispositions and tendencies a louder voice, and increases the chances that these tendencies will be given fuller expression. Thus, we must consider interactions between the person and the situation. As Galinsky and colleagues point out, “the situation loses its suffocating hold over the thoughts and behavior of the powerful… and they are left with their own opinions, beliefs, attitudes, and personalities to drive their behavior.”

Research shows that activating the concept of power in men with an already-existing disposition toward sexual harassment or aggression increases objectification of women. There’s also an emerging line of research on the “Dark Tetrad,” which consists of the darker personality dispositions of narcissism, psychopathy, machiavellianism, and everyday sadism. One study found that when given the opportunity, everyday sadists (those with a higher appetite for cruelty) killed bugs at greater rates than nonsadists, and were more willing to work for the opportunity to hurt an innocent person. Similarly, when narcissists have their ego threatened (e.g., are insulted), they are much more likely to become aggressive, even  against innocent bystanders.

Not just anyone put in a position of power will hurt others, however. Serena Chen and colleagues found that those with an “exchange relationship orientation” (who focus on tit for tat) engaged in more self-serving behaviors when given power, whereas those with a “communal relationship orientation” (who take into account other people’s needs and feelings when making a decision) demonstrated greater generosity when given power.

So what, if anything, can we do to decrease the likelihood of power leading to bad behavior?

One interesting reversal to the finding that power amplifies the person is that when people in positions of power are given explicit and salient goals, the situation becomes much more important, and can override people’s innate dispositions.* Perhaps we can refocus people’s tendencies in a positive direction by providing them with clear prosocial goals.

This suggestion acknowledges the fact that no one is all good or all bad; all of us have many sides. Even people who abuse power most certainly have other, more prosocial sides that may be unexplored. We must ask ourselves which side we most want to bring out of a person. Zimbardo’s experiment shines a light on the bad, but I could imagine an equally persuasive study designed in such a way to show the incredible potential for good in just about anyone when given power with prosocial goals.

Another way to bring out more positive outcomes is to simply put more people with prosocial dispositions (e.g., high empathy and compassion) in positions of power and let them carry out their already existing prosocial goals (e.g., desire to reduce violence, feed the hungry, etc.).

There are so many humane people in this world. In fact, most people are humane. Let’s not let the minority who abuse power make us forget this fact. I think the media as well as psychologists could do a lot more to highlight the more uplifting and hopeful segments of humanity. As Jimmy Carter once said, “What are the things that you can’t see that are important? I would say justice, truth, humility, service, compassion, love. You can’t see any of those, but they’re the guiding lights of a life.”

Recognizing that power is not inherently good or bad, we can try to stack the deck as much as possible to harness the incredible power of power. As Galinsky and colleagues so eloquently write:

Perhaps human accomplishment is as much about the cans and cannots as it is the haves and the have-nots. Although power is often thought of as a pernicious force that corrupts those who possess it, it is the protection from the situational influence demonstrated here that helps powerful individuals surmount social obstacles and reach greater heights of creativity to express the unpopular ideals of today that can lead others to the horizons of tomorrow.

* This is another valuable lesson of the Stanford Prison Experiment: the power of goals from authority figures. Experimenters like Zimbardo are in a position of power themselves, and are responsible for not abusing that power. This was also a lesson of the famous Milgram experiment. In the Stanford Prison Experiment, there was no ethical oversight. Zimbardo took on the role of the prisoner superintendent, and explicitly told the guards to gain control over the prisoners. In some cases, he encouraged the priosoners to abuse the guards. In a telling attempt to replicate the Stanford Prison Experiment, the BBC found that the prisoners worked together to overthrow the guards, who were ambivalent about their roles in the first place. The difference between the experiments? The experimenters were held accountable, as the BBC study had an ethical committee that continually monitored the study to make sure it didn’t get out of hand. Also, there was even some uncertainty about roles. At least in the beginning, prisoners were told that they might be able to become guards. Research shows that in environments in which authority is unstable, or at least perceived as unstable, being in a position of low power can actually be empowering. As one group of researchers put it, “For low power individuals, power instability is empowering, leading them to act and behave as high power individuals… Having unstable low power leads to feelings of confidence and self-efficacy, especially when low power individuals can gain power by being creative. They may be more confident about their abilities and also perceive that they have the ‘power to change their situation.” I agree with other psychologists that the original message of the Stanford Prison Experiment—that groups are bad, and that people in power automatically abuse power—is far too simplistic.