What qualities do we look for in a prospective co-parent? Partner preferences usually involve some winning combination of physical attractiveness, status, and resources, at least according to evolutionary theory. 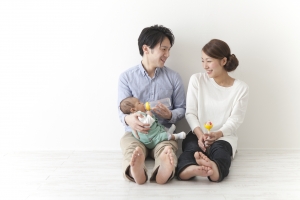 But there’s another quality we might be overlooking in the search for a mate: humility.

Humble people accurately acknowledge both their strengths and weaknesses. They’re modest and considerate. Humility seems to be especially important in maintaining and repairing relationships. For couples, the transition to parenthood can be bumpy. They have to figure out how to take care of a new baby together—an experience that can lead to differences in opinion. Can having a partner—and being a partner—who is humble make the journey into parenthood easier?

In a recent study, Daryl Van Tongeren and his colleagues studied nearly 70 married, heterosexual, mostly white and thirty-something couples shortly before and after the birth of their first child. During the last trimester of pregnancy, couples completed questionnaires that measured their partners’ (not their own!) humility with items like, “He has humble character” and “She knows her strengths.” The researchers also asked couples to complete questionnaires to measure their own stress, anxiety, and depression during the first study visit, and then again when their newborn baby was three months old.

Unfortunately, humility needs to be a two-way street for the benefits to be felt. “Being the only humble partner in a [relationship] appears to be taxing,” explain Van Tongeren and his colleagues. “The benefits of humility across a life transition appear to be reserved for those marked by humble relationships—both members of the couple are humble.”

Another team of researchers re-examined the same nearly 70 couples in a 2018 study, this time looking at answers to questions about forgiveness, like, “I can usually forgive and forget an insult.” The couples also reported on the quality of their marriage with questions like, “How often do you and your partner quarrel?” at four points in the study: during the last trimester of pregnancy, and when their newborns were three, nine, and 21 months old.

The findings? Marital quality declined during the transition to parenthood in couples with both low and high levels of humility. However, people with more humble partners before their babies were born tended to have better marital quality at all time points, compared to people with arrogant partners. This was true no matter how forgiving they tended to be.

This doesn’t mean that the ability to forgive doesn’t matter in a relationship—only that the link between humility and marital satisfaction is not just a reflection of how forgiving partners are of one another, at least in this study. “A couple beginning their transition to parenthood may experience difficulty, but our results suggest that they will fare better as a couple if they begin their journey with full reservoirs of humility,” explain lead author Chelsea Reid and her colleagues.

So, what do these study findings suggest for expecting and new parents? Apart from attending childbirth classes and reading up on newborn care to gain parenting skills, couples can commit to strengthening their relationships, support one another’s involvement as parents, and approach parenting like they’re both on the same team—with humility. Reid and her colleagues suggest couples in the transition to parenthood learn “how to communicate humbly over disagreements, negotiate intimacy concerns with humility, and humbly disengage from power struggles.”

Researcher Caroline Lavelock and her colleagues developed exercises that focus on the key elements of humility and found that it can be strengthened with practice.

Parenting is rife with opportunities for beating up on ourselves over “wrong” decisions and for partners to condescendingly call out each other’s faults. But humility can cradle us in authentic self-awareness and commitment to uplift one another. When it’s 3:00 a.m. and we’ve been struggling for two hours to help our baby go back to sleep, our partner’s looks, job title, and investment portfolio might all pale in comparison to whether they’re humble enough to put their ego aside and be in the trenches with us trying to figure out how to help.