Stereotypes are widespread but fixed ideas about specific groups of people. If the stereotype is negative, research suggests, it may lead us to consciously or subconsciously avoid or limit contact with entire groups of people—and negative experiences with a stereotyped group can reinforce this avoidant behavior. 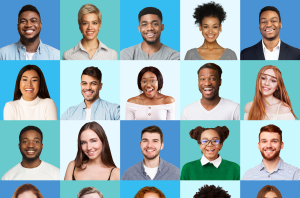 A recent paper explores the impact of avoidance on reinforcing stereotypes through a series of studies. Their results reveal how stereotypes can prevent us from accurately perceiving a reality that never stops changing.

Each group of aliens had differently colored skin, like green or blue. Most were seen multiple times, but throughout the task the alien faces were slowly replaced, even as they maintained the same skin color. To prime the development of stereotypes, researchers told participants to try to determine which aliens were more likely to give points and which were more likely to take points away, based on their interactions.

Participants played nine rounds. In the beginning of the game, one group of aliens was more likely to give points, while the other was more likely to take points away. By rounds six to nine, the cooperative behavior began to shift such that by the final round, aliens of both groups were cooperating equally. This blurred the once clearly defined stereotype lines.

How did that affect the participants? In the beginning rounds, they were more willing to interact with the group of aliens that were more cooperative; in other words, unsurprisingly, positive interactions increased the likelihood of future interactions. As the faces of the aliens changed and the cooperative tendencies became more equitable between alien groups, participants still continued to approach the initially more cooperative alien group more than the other.

This showed how powerful first impressions can be. Participants developed a kind of stereotype in those initial interactions, one that overrode the evidence provided by later interactions.

For a second experiment, the researchers tried to answer this question: What happens when we notice repeated contradictions to our stereotypes? In this case, one group of aliens gradually changed their behavior, while the other stayed constant. The results of this experiment were somewhat counterintuitive: As the behavior of one alien group changed, participants modified their interactions with the other whose behavior stayed the same.

Why? In the paper, the researchers speculate that “changes in the composition of one group serve as a signal to participants that the other group is also going to change, causing them to adjust their behavior toward the other group even in the absence of any actual change in that group’s behavior.” Put differently, changes in the stereotyped behavior of one group can cause us to rethink the accuracy of the stereotype for another group—and perhaps to question the validity of stereotypes in general.

What if we are presented with information that disconfirms the stereotype about a group?

In a third experiment, the researchers varied the rate of change of the behavior of the uncooperative group from virtually non-cooperative to extremely cooperative as they progressed through the rounds of the game.

Participants were split into two groups. Group one only knew if the alien would give or take away points if they interacted with the alien (non-feedback group). If participants in group two decided not to interact with an alien, they were informed of its point intentions anyway (feedback group).

The results suggest that it takes a lot to change ingrained stereotypes. “When changes in the [uncooperative] group were only moderate, participants did not update their beliefs regardless of the type of feedback they received and initial learning persisted,” write the researchers. Thus, when faced with only slight changes in the behavior of the uncooperative group, participants did not update their beliefs. It was only when the aliens demonstrated a drastic change in behavior did participants start to interact with them more. Under these conditions, participants in the feedback group interacted at a faster rate than those in the non-feedback group.

This research suggests that new experiences have to provide a drastic departure from stereotyped beliefs in order to change behavior toward a group. This can potentially create other tropes that may be equally damaging, even if positive—as with, for example, the “model minority” or “Black exceptionalism” stereotypes. These experiments can also remind us that experiences create their own biases. As the researchers note: “A perceiver who wishes to form accurate beliefs must be aware that their experiences may be biased.”

If a positive recommendation comes from this study, it’s that mindfulness and self-awareness are essential to forming accurate ideas about people. As we move through the world, we need to ask ourselves: Am I avoiding certain groups of people? Why? Are past experiences or beliefs warping my awareness of what is happening right here, right now?