Sharing a classroom with students who are protected from negative stereotypes about their group can boost all students’ grades, new Stanford research shows.

The study was published in Psychological Science, a journal of the Association for Psychological Science. Joseph Powers, a Stanford psychology graduate student and lead author on the paper, says that “changing the psychological processes of just a few individuals can transform the larger group in ways that benefit everyone.” Powers was joined in the research by Stanford Graduate School of Education psychology professor Geoffrey Cohen. 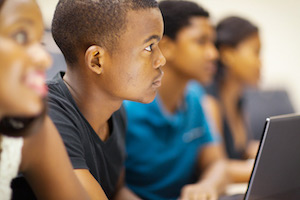 The researchers essentially protected African American students from “stereotype threats” through subtle psychological interventions. A stereotype threat is a situation in which people feel at risk of confirming negative stereotypes about their group, ethnic or social. This, for example, can lead to minority students underperforming academically as compared with white students. Over the last two decades, researchers have identified and documented this phenomenon in a variety of contexts.

Overcoming deep-rooted stereotypes is not easy, so Powers and Cohen sought to examine whether “values affirmation” experiments that encourage a few minority students in a classroom to focus on their best qualities can help the other students improve their grades, too. One common way to affirm values is through written exercises—the key is that students reflect on and are conscious of the things that matter the most to them personally.

The Stanford project consisted of studies involving seventh-grade students from middle- to lower-middle-class families at a suburban northeastern middle school. All ethnic groups were studied. During the experiment, students received sealed envelopes with writing materials from their teachers. They then wrote about what personal attributes they valued the most.

After about 15 minutes of writing, students placed the materials back in the envelopes, and the materials were returned to the researchers. Students believed they were participating in a regular classroom writing assignment—they did not know it was part of a research study. The grades of the students in the experiment and those who did not participate were later compared.

The findings showed that the classrooms with higher concentrations of African American students protected from stereotype threat by the experiment triggered higher academic performance among all classmates—regardless of race or participation in the experiment. This effect was most pronounced among students with a history of poor performance.

The data indicate that adding just two African American students to the experiment group in a typical classroom improved the classroom environment enough that low-performing students’ grades increased, on average, by a third of a letter grade (e.g., from a C to a C+).

“Results suggest that the benefits of psychological intervention do not end with the individual. Changed individuals can improve their social environments, and such improvements can benefit others regardless of whether they participated in the intervention,” Powers and Cohen write.

The analysis confirmed that this overall classroom improvement effect was not influenced by factors such as student race or the teachers involved.

The experiment triggered not only a change in individuals, but also a change in the group atmosphere. Previous research has documented how the experiment improves academic performance and social belonging among African American students, but the new studies found that classrooms with higher concentrations of these students were triggering higher performance among all classmates.

“The main implication is that we may often underestimate the full effect of social programs and interventions if we only measure for direct effects among participants,” Powers says. “The concentration of beneficiaries within a group can trigger effects as large or larger than the initial program or intervention.”

Powers suggests that future research should explore the precise mechanisms that allow or inhibit such reactions. For example, does a classroom with a higher concentration of students receiving affirmations of their core values create new ways of understanding achievement—and does this also help free up resources by empowering teachers to do their job in a psychologically safer environment?