Few parenting conversations in early childhood elicit as much angst and judgment as the one about our children’s sleep: Where should they sleep, and how do we get them to sleep through the night? We label newborn babies as “good,” or not, depending on how much they disturb us in the nighttime, or we believe babies’ sleep is a reflection of our parenting competence. 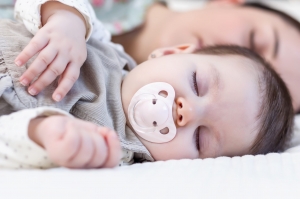 But our beliefs and decisions about children’s sleep are more a reflection of the culture we live in than the scientific evidence for what’s best for children, says anthropologist James J. McKenna, in many of his 150 scientific articles on children’s sleep. McKenna is director emeritus of the Mother-Baby Behavioral Sleep Laboratory at the University of Notre Dame, and author of Safe Infant Sleep: Expert Answers to Your Cosleeping Questions. He has devoted his career to understanding what happens to babies and their caregivers when they sleep together versus apart.

McKenna’s conclusions, supported by research from other anthropologists and developmental scientists over the last 30 years, have thrown him into direct conflict with the American Academy of Pediatrics over recommendations about where babies should sleep. “Separately,” say the pediatricians, while McKenna and his colleagues say, “Together, but safely.” McKenna’s easy-to-read book offers important insights about how cosleeping can be made safe and what kind of benefits it might promote for children’s development and parents’ well-being.

How did sleep become so controversial?

About 500 years ago, Western societies diverged from the rest of the world regarding family sleep, McKenna explains. Historical records from northern Europe show that Catholic priests heard confessions from destitute women who had “overlain” onto their newborns, suffocating them in a desperate attempt to limit their family size—they just couldn’t support another child. So the church ordered that babies should sleep in a separate cradle until the age of three.

Over time, other Western trends converged with that decree: Rising affluence and the value on independence and individualism made separate bedrooms fashionable. In addition, Freudian psychology privileged the marriage bed and claimed that babies would be harmed if they were exposed to parents’ sexuality. Religious and psychological opinion said that children should not be coddled or indulged but required severe discipline to grow up (“spare the rod, spoil the child”).

As recently as the 1960s, the kindly Dr. Spock recommended that newborns be trained to sleep alone, and if the baby’s crying stressed the parents, they should place a towel under the door to block out the noise. In the 1990s, parents “Ferberized” their babies—letting them “cry it out” to sleep “independently,” based on the book Solve Your Child’s Sleep Problems by Richard Ferber.

The psychological benefits of cosleeping

Meanwhile, anthropologists observed that all mammals and primates, as well as the majority of non-Western societies around the world, coslept. Therefore, it was likely that the practice had some biological advantage.

One of McKenna and his colleagues’ greatest scientific contributions has been to show how parents serve as a kind of biological “jumper cable,” or outsourced regulator, to a newborn baby when she is completing her gestation outside her mother’s body. When parents and babies sleep together, their heart rates, brain waves, sleep states, oxygen levels, temperature, and breathing influence one another.

To a biological anthropologist, this mutual influence implies that the offspring’s growth is intended to occur most safely inside that biological system, near an adult’s body, especially in the first few months of life while the baby’s own physiology is the most immature. For example, animal studies found that when baby monkeys were separated from their mothers, their bodies went into severe stress. A small study of 25 four- to ten-month-old babies who were separated for sleep training showed that even though the babies’ behavior quieted on the third night, their levels of cortisol (a stress hormone) remained high.

When adults and babies sleep together, McKenna and his colleagues found, they do sleep more lightly and rouse more often. Though that might sound undesirable, it is safer, says McKenna, especially in the first few months of life, because it creates more opportunities for caregivers to check on their babies and for babies to recalibrate their breathing to the adult’s breathing. For an added benefit, that lighter sleep, or REM (Rapid Eye Movement) sleep, is also important for synaptogenesis, the rapid growth of connections between neurons, in newborns.

At the same time, both adults and babies sleep longer overall when they bedshare, probably because caregivers don’t have to get all the way up out of bed to feed and babies don’t have to call out, wait for help, and settle back down. And that longer sleep has implications for parent-child interactions in the daytime. Research suggests that more well-rested parents make better decisions and, importantly, have better emotion regulation. Sleep deprivation also raises the risk of postpartum depression.

Fathers who bedshare benefit in other ways, too: One study found that when fathers slept close to their babies, their testosterone dropped more compared to fathers who slept separately. Men with lower testosterone tend to engage in more sensitive and responsive parenting, which means that bedsharing may make for better fathering.

Families who choose to cosleep beyond infancy but worry it makes children overly dependent can relax. On average, children who bedshare do tend to transition to sleeping independently about a year later than other children, but they may be more independent, self-reliant, and confident in their daily lives than children who did not bedshare.

A small study of 83 preschoolers found that children who slept alone from an early age fell asleep more on their own and slept more through the night, but the preschoolers who coslept from an early age were more likely to dress themselves, entertain themselves, and work out problems with peers on their own. Another study of 205 families showed that by age 18, children who bedshared did not differ from solitary sleepers in their sleep problems or mental health. In other words, as children grow, many different factors contribute to their well-being.

Most parents have a natural inclination to sleep protectively near their babies, and data suggest that cosleeping is on the increase. In 2015, a U.S. Centers for Disease Control and Prevention survey found that more than half (61 percent) of American babies bedshare at least some of the time. 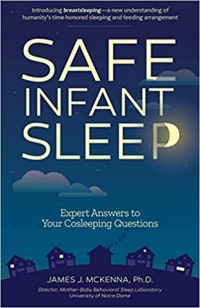 And while the American Academy of Pediatrics recommended in 2016 that parents and babies sleep in the same room together for at least the first six months of life, and preferably for the first year, they stopped short of recommending that parents and babies share the same bed. That makes for a gap between what most parents are doing and what they are officially “allowed” to do. As a result, many parents are afraid to let their pediatrician know they bedshare for fear of being criticized or, worse, reported to child protective services.

When that conversation is stopped, McKenna points out, parents are deprived of accurate information about what can make their bedsharing most safe and beneficial. To that end, his book offers guidance, even drawings, for every sleeping circumstance.

After the first six months of life when a baby’s physiology is more settled, a variety of factors can come into play in the decision about where to sleep, like cultural beliefs, overall family well-being, and an individual baby’s temperament or medical needs. For example, a family may decide that a biologically sensitive child may benefit more from remaining close to the parents longer; on the other hand, a coparent may need a separate sleeping arrangement in order to sleep better—and a happier parent is a better parent.

All the researchers agree, though, that families do better when the adults are intentional and in agreement about their choices. Importantly, McKenna normalizes expectations around sleep: Even by one year, not even half of babies sleep through the night, and eventually it is the quality of the parent-child relationship, not where it plays out, that matters most to a child’s development.

It might seem like McKenna is pushing cosleeping, but he denies that. Instead, like a true anthropologist, he believes that only parents can truly know their families’ specific needs, and they must be free to make the choices that best serve them—they simply have the right to be accurately informed about all the issues involved. Safe Infant Sleep should be in every pediatrician’s office and available to any parent who wants to understand how their babies’ sleep really works.