My fellow mothers will recognize the symptoms of so-called “mom brain”—that feeling of fuzzy forgetfulness that seems to strike many moms as we juggle diapers and dirty dishes. But does this condition have any basis in science?

A new study in Nature Neuroscience suggests the answer is yes. Pregnancy does seem to change a woman’s brain—perhaps permanently—so that she can better connect with other people.

Prior research has suggested the pregnant brain may have fuzzy moments—but they don’t last long. For example, one study reports that some measures of verbal memory (but not memory for faces or spatial locations) get worse during the last trimester of pregnancy. But other studies have found little to no cognitive deficits. In fact, some studies have found motherhood actually makes rodents smarter. 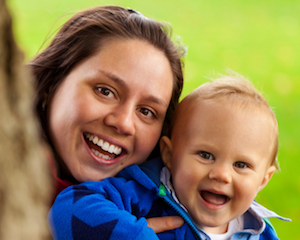 The new study, by a team of researchers based in Spain, gathered four groups of participants: 25 first-time mothers, both before and after the birth; 20 women who had not yet had children; 19 first-time fathers; and 17 men without children.

These participants underwent an MRI scan so that researchers could compare the anatomy of different structures in their brains. The researchers observed pregnancy-related changes mainly in what’s called gray matter—the type of brain tissue that contains the highest density of interconnected neural cells—within several regions of the brain known to support social and emotional understanding.

The result? Pregnant women lost a significant amount of gray matter, in a pattern similar to what happens during puberty—another time when women experience a surge of sex hormones like estrogen. This adolescent “synaptic pruning” doesn’t mean we get dumber as teens. Instead, the brain is simply becoming more efficient and refined, in a process associated with healthy cognitive and emotional development. In other words, the teen brain is “leveling up” into greater maturity as it sheds extraneous connections between neurons.

Could something similar be happening with women when they go through pregnancy? When the researchers scanned the brains of the same women two years later, the changes remained in place, suggesting they may be permanent. There were no similar changes in the brains of first-time fathers or childless men and women. In fact, note the authors, the pattern was so distinctive that it could be used to tell whether a woman had ever given birth.

The biggest changes were concentrated in regions of the brain that help us navigate social interactions and form close relationships with others. The areas that showed pruning were specifically related to the “theory of mind” network—that is, the part of the brain that tries to figure out what people are thinking and feeling. The researchers speculate that this may enhance mothers’ ability to accurately guess their infant’s emotional states and meet their needs.

To test their theory, the researchers showed the women in the study photos of their own babies while administering an fMRI scan, which captures activation in brain regions in real time. Indeed, the parts of the brain affected by the grey matter changes were also the areas that lit up the most in response to pictures of the mothers’ own babies (when compared to photos of other people’s infants). In addition, the researchers found that the change in gray matter significantly predicted the quality of mother-to-infant attachment, as assessed through a survey. The more gray matter lost, the more positive the mothers felt about interactions with their baby.

In other words, the changes that unfold in a pregnant woman’s brain almost certainly indicate that she’s growing as a person—especially when it comes to figuring out what other people need and feel.

So, new moms, don’t feel too bad about “mom brain.” You may feel forgetful at times, but you’re primed to forge a stronger bond with your baby.