Humans are social creatures with a propensity to connect with others and to form relationships. Our relationships can be sources of fun, gratification, peace, well-being, obsession, love, pain, and grief. They inform the rhythms of our days, the work that we do, and how we feel about ourselves—and they add meaning to our lives. 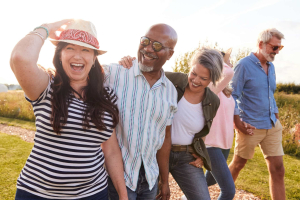 But our social nature isn’t just a product of the way we are raised or the culture we live in. It’s actually visible in the design and function of our brains and the inner workings of our bodies, which have evolved to support our complex social lives.

“To the extent that we can characterize evolution as designing our modern brains, this is what our brains were wired for: reaching out to and interacting with others,” writes neuroscientist Matthew Lieberman in his book Social: Why Our Brains Are Wired to Connect.

We are each equipped with biological mechanisms that underlie our ability to empathize, cooperate, give, and love. These neural circuits underpin all of our relationships, beginning at birth—and maybe even before.

Anyone who’s winced when they’ve watched a child skin their knee or witnessed a loved one’s intense grief knows how visceral empathy can feel. Our ability to empathize, to resonate with people’s pain and emotions, is an important driver of how we relate to others.

In fact, a study by neuroscientist Tor Wager and his colleagues found that we have a brain circuit dedicated specifically to empathic care—the positive, motivating feelings that drive us to help others in order to relieve their suffering. This circuit includes the nucleus accumbens and the medial orbitofrontal cortex, brain areas involved in rewarding activities like eating and sex.

By incentivizing our ability to feel warmth and care in the face of another person’s suffering, activation of this circuit encourages acts of selflessness and compassion.

Wired for cooperation and generosity

Indeed, our brains are hardwired to encourage us to behave socially—even with strangers.

This is exemplified in a study by anthropologist James Rilling and his colleagues. They used functional magnetic resonance imaging (fMRI) to scan the brains of 36 women while they each played a game based on the prisoner’s dilemma with one other woman. In this game, a player behaving selfishly could win $60 and their partner would win nothing. If both players cooperated, they both would win $40.

While participants stood to gain more through making selfish choices, mutual cooperation was the most popular outcome. When partners had mutually cooperative interactions, brain regions involved in reward processing were activated. The researchers propose that this pattern of brain activation is “involved in sustaining cooperative social relationships, perhaps by labeling cooperative social interactions as rewarding, and/or by inhibiting the selfish impulse to accept but not reciprocate an act of altruism.”

The reward system is also activated when people make anonymous charitable donations, according to another study. This suggests that human brains are wired to be able to extend altruism beyond people we know into a more abstract sense of care toward a group of strangers or a moral cause—and feel good doing it.

Relationships are key to our health and happiness and likely were essential for the survival of our ancestors. As such, it makes sense that our brains are well-equipped to begin forming bonds with others as soon as we are born.

In fact, researcher Martha Welch’s “calming cycle theory” hypothesizes that the earliest relationship—between mother and infant—actually begins before birth via the co-conditioning of mother’s and baby’s autonomic nervous systems.

According to this theory, through dynamic changes in hormone release and heart rate, mother and infant can influence each other’s physiology while the baby is in utero. After the baby is born, sensory information from the mother such as scent, touch, voice, or eye contact can initiate this autonomic response, calming both baby and mother. This is important because infants cannot regulate their emotions on their own and rely on their mothers and other caregivers to help them through periods of distress. The early formation of autonomic co-regulation between mother and baby may help lay the groundwork for a mother’s ability to help calm her infant after periods of separation.

Studies of rats, primates, and other mammals have also identified cortical brain circuits that are involved in forming and maintaining bonds between parents and their offspring. For example, activity in an area of the brain called the orbitofrontal cortex (OFC) appears to be involved in maternal love. OFC activity increases in human mothers viewing their own babies and in infants viewing movies of their smiling mothers.

Some of these same biological mechanisms that underlie the parent-child bond are also important for our other relationships. The brain’s reward system, for example, is similarly activated by maternal and romantic love. A study by Andreas Bartels and Semir Zeki used fMRI to measure brain activity in mothers viewing photos of their own child, another child they knew, their best friend, and other adult acquaintances. The findings suggest that viewing a photo of their child or their best friend activated overlapping regions of the mother’s reward system (as well as some distinct brain areas). It also led to decreased activity in brain areas involved in social judgment and negative emotions, compared to viewing photos of people they merely knew.

The researchers conclude, “Human attachment employs a push-pull mechanism that overcomes social distance by deactivating networks used for critical social assessment and negative emotions, while it bonds individuals through the involvement of the reward circuitry, explaining the power of love to motivate and exhilarate.”

The areas of the reward system activated by love also contain receptors for oxytocin, a naturally occurring hormone that plays an important role in attachment. Research suggests that its release decreases stress and anxiety, increases well-being and trust, and may be a biological mechanism that underlies bonding between parent and child, between friends, and between romantic partners.

Another thing that happens in our bodies when we’re bonding is biobehavioral synchrony, where our behavior and biology begin to mirror those of a social contact. When a mother and infant interact, for instance, their heart rhythms, brain activity, and hormone release become matched. Studies suggest that this process prepares babies to be able to synchronize in future relationships, too. And other studies have found elements of biobehavioral synchrony between romantic partners, friends, and even strangers.

In fact, purposefully synchronizing behavior may be one way to increase intimacy. In one study, strangers who pedaled bicycles in synchrony and romantic partners who imagined walking synchronously with their partner both reported greater feelings of intimacy and closeness than did those asked to pedal asynchronously or to imagine walking out of step with their partner. This suggests that joint movement—whether it occurs naturally or by design—may help people feel more socially connected.

Sometimes synchronized activities—such as dancing—can involve touch. Whether it be a kiss, a hug, or a pat on the back, touch can convey comfort, emotion, and affection to the people we care about. Research over the past two decades has found that there is a special pathway in our nervous system that is particularly sensitive to these forms of “social touch.”

In particular, our skin contains a special type of touch receptor that responds to pleasant touch, like the soft brushing of an arm at a medium velocity. These “C-tactile afferents” (also called CT fibers) project to a part of the brain called the insular cortex, which is involved in processing information about emotions and interpersonal experiences. Researchers hypothesize that the social touch pathway conveys important information to the brain that helps facilitate bonding.

Remarkably, a study found that the insular cortex can also be activated by watching other people have their arms pleasantly stroked. This could represent a form of “neural empathy” that helps us understand the nature of the relationships between the people who surround us, and better allow us to integrate into groups.

The studies mentioned thus far, along with a rich body of other work, support the social baseline theory (SBT) by psychologists James Coan and David Sbarra. This theory suggests that the human brain operates under the assumption that our interactions with others are a vital resource that helps us stay safe and meet our goals.

“At its simplest, SBT suggests that proximity to social resources decreases the cost of climbing both the literal and figurative hills we face, because the brain construes social resources as bioenergetic resources, much like oxygen or glucose,” write Coan and Sbarra.

This suggests that when we don’t have access to social connections, we shift our cognitive and biological resources to focus more on ourselves, leading to distress, ill health, and limited achievement. When our lives are rich in social connection, however, we can move mountains—and, indeed, we are happier, healthier, and more successful.