Has “ethics [become] a luxury as the speed of our daily lives increases”? 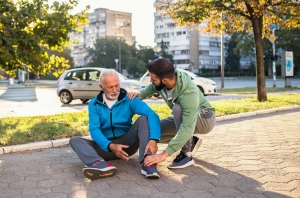 This is one of the implications that John M. Darley and C. Daniel Batson considered in their famous 1973 “Good Samaritan” study. In an ironic turn of events, some theology students on their way to deliver a lecture on the Good Samaritan—about how spiritually important it is to be helpful—did not stop to assist someone slumped over in pain. But other students in the study did stop to help. The difference was how much time they had to get to the lecture hall: Told that they were late, only 10 percent stopped; told that they had time to spare, 63 percent did.

The interpretation? Being in a rush, students’ self-preservation instincts overpowered their capacity to orient toward another person’s needs. The stress of hurrying may have narrowed their attention, so that they failed to even notice the victim, and monopolized their mental resources to avoid personal harm—the harm that being late would cause to their reputation.

Over 45 years later, much of our lives are lived at a fast pace. Imagine all of the day-to-day moments when you face opportunities to help: A homeless person gesturing from the traffic median. An online fundraising post for a friend of a friend in duress. A visibly overwhelmed colleague at work. In situations like these, do you reflexively approach and contribute, do you pause to think through your options, or do you just move along?

Contrary to the Good Samaritan study, a new study suggests that, when time is tight, behaving in ways that serve the social good—being cooperative, generous, fair, and compassionate—is actually our first impulse; we simply have to act on it.

Researchers from UC Santa Barbara (UCSB) surveyed groups of 1,500 people online to capture their attitudes about socially desirable behaviors, or ways of being that most people would consider admirable and virtuous. Participants gave true-false responses to statements like “I sometimes try to get even, rather than forgive and forget” and “I am always willing to admit it when I make a mistake.” People who say they are more forgiving and hold themselves accountable are judged as having a more ethical stance that values things like cooperating and helping other people, which would motivate more kind behavior.

For the survey, some participants were randomly instructed to select true or false in under 11 seconds, while others were instructed to wait at least 11 seconds before responding. A third group was given no time-related instructions; they filled out the survey at their own pace.

The UCSB team found that participants who responded in under 11 seconds scored higher in social desirability. In other words, with limited time to answer questions, they described themselves as more kind and helpful, while more time led people to characterize themselves more selfishly.

There could be different explanations for this pattern. The people in the study might have learned that kindness begets rewards in life—from times when they were kind and received good things like gratitude, a friend, or a favor in return. This could have created an association so strong that socially desirable choices were reflexive and prevailed when they had less time to think. Or this pattern could represent an expression of people’s core beliefs about humanity. If people believe that our “true selves” are inherently good and they lack the time to reflect on this belief or consider evidence to the contrary, their judgments may automatically align with it.

In other words, behaving in ways that serve our relationships and other people doesn’t seem to require us to see the fundamental goodness in humankind, nor does it require us to take time for careful contemplation. The impulse towards kindness, the researchers suggest, is a deeper, learned habit that comes from a lifetime of associating kind behaviors with beneficial outcomes.

Evidence from several other studies is consistent with this conclusion. By analyzing whether participants make cooperative or self-interested choices in social games and laboratory tasks, multiple studies report that rushed judgments are more—not less—generous and cooperative. Contrary to the Good Samaritan study, this body of work suggests that people’s prepotent inclination is to be helpful and friendly, and that more callous behaviors require additional thought and effort. Even neuroscience studies have found that selfish choices take more time and involve greater activation of the prefrontal cortex—a region that supports attention shifting and more complex cognitive processes.

So why did the tardy Good Samaritan lecturers fail to help? Results from live field studies can deviate from findings in laboratory or online survey studies, of course. But the more recent research may point to another explanation. In fact, being less late is also a kindness to others, and the theology students may have refrained from helping the one person in need to better serve the full audience of people in the lecture hall. In other words, this is not a story where the unethical choice prevailed, but where time-pressed participants made a utilitarian decision to maximize their positive impact on the greatest number of other people.

All of us face opportunities to help others—often in situations that seem to have an endless matrix of extenuating factors. Why is this person needy? Am I the best person to help? Is anyone watching? How costly will helping be? Can I even make a difference? Before we know it, the chance to do anything has passed. Then, having failed to live up to our ideal of kindness and care, we are left feeling personally diminished or even hopeless about humanity, which are two of the key risk factors for burnout.

This recent study suggests a simple alternative. We don’t have to try to change our foundational views or beliefs about the goodness of humankind (though this probably wouldn’t hurt). The benefits don’t have to outweigh the costs, and we don’t have to be certain that our contribution will be the cure. Instead, we can trust and act upon our quick first impulse to be kind out in the world. This default sensibility comes, the data suggests, from a deep-seated preference for kindness that unfortunately tends to get undermined by overthinking. When it comes to kindness, we may be better off leaping before we look.