There’s a stereotype about people seeking happiness—that all they care about is themselves. They look at the world through rose-colored glasses, and so they refuse to see suffering. If we want to motivate people to care about righting social wrongs, the thinking goes, then we must stoke people’s anger and fear. 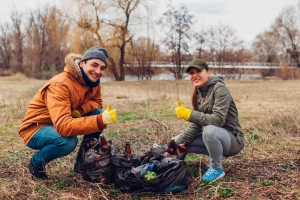 Now a new study refutes that narrative. According to the study’s findings, happier people seem to be more likely to take social action than their less happy peers.

Researchers surveyed three different groups of people to see how generally happy they were, then gauged how much they cared about a particular social issue. They also had people report on actions they’d taken in response to the issue, their future plans to take action, and, in some cases, their willingness to sign up on the spot to participate in social action.

The first group consisted of students at the University of Virginia. Following the violent Unite the Right rallies in the summer of 2017, students reported on how often they experienced positive and negative emotions over the previous four weeks. Then they were told to write about the thoughts and emotions the rallies had inspired before filling out the questionnaire again, with a focus on how the rallies made them feel.

Afterwards, the students were given a list of 10 possible actions to take in response to the rallies—like writing blog posts, participating in protests, or giving money to a cause—and asked if they had already done the action, planned to do it, or had no intention of doing it. The students were also given an opportunity to join “a community of peers” who were supporting and assisting others encountering racism—a measure of their current interest in activism.

After analyzing the results, researchers found that generally happier students showed more concern about the rallies and were more willing to take part in current action to help the affected community than less happy people—a finding that stands in contrast to many people’s expectations.

“There’s a naïve belief out there that maybe we shouldn’t be focused on making people happier or increasing their well-being because they won’t be motivated to do anything,” says lead researcher Kostadin Kushlev. “But our findings suggest the opposite: Being happier links to more action, not less.”

To corroborate this, Kushlev and his colleagues did two other experiments. One involved a wider, more diverse group of participants. But, instead of selecting an issue for them, the researchers asked participants to identify their own issue, like concern about the environment or the current state of the government. After following a protocol similar to the prior experiment, they found that happier people again showed more concern, were more likely to have taken action, and signed up to receive more frequent informative newsletters about their issue than less happy people. In other words, they were more socially involved.

That doesn’t mean that unhappy people didn’t care or didn’t want to take action, though. In fact, less happy people were more willing to act in the future than happier people were. But, as Kushlev notes, it’s hard to know whether or not they would have actually followed through.

“You may say you want to do something in the future but become too overwhelmed by negative emotion, and not actually end up doing that thing,” he says.

For the last experiment, they analyzed data from the 2010 U.S. General Social Survey to see how “not too happy,” “pretty happy,” and “very happy” people reported on their concern for the environment, their efforts to protect the environment (through recycling, avoiding environmentally harmful products, reducing fuel consumption, etc.), and their willingness to sacrifice in the future for the good of the environment (through measures like paying higher taxes or accepting a lower living standard).

How could this be? Kushlev says he believes people who experience more joy and happiness probably have more energy and more resources to be able to give to causes they care about. So, their intention to act is more likely to translate into action. They may also be better able to connect to a sense of hope—the belief that their actions will make a difference—while less happy people may be more likely to believe that we’re all screwed, so why bother?

While these findings don’t mean that happiness causes social action, they do refute the idea that happiness is associated with selfishness, apathy, and shortsightedness, says Kushlev. If anything, being happy seems to increase people’s willingness to take action—even when accounting for things like their income or their level of concern.

“Given that we did three different studies and saw the same pattern over and over again, it’s pretty clear that positive emotions are not bad for social action,” he says.

All of this is good news for those of us who want to be happier but worry that it will interfere with our social and political activism. Perhaps taking care of our own well-being really will help us to take care of the world.