Vy Higginsen got the nickname “Mama Vy” from one of the first students to show up for Sing Harlem Choir, a program she launched in New York in 2006. She’s been Mama Vy to thousands of teenagers ever since. 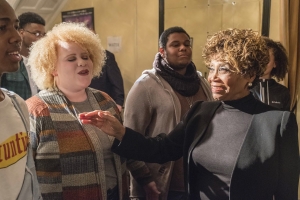 "Mama Vy" Higginsen with some of her students. © Ed Kashi

After an illustrious career in entertainment and magazines, Higginsen was consumed with the idea of exposing young people to the gospel music she grew up with. But it’s always been about more than music.

Higginsen is helping teenagers “find inspiration and information to survive using the music that helped an earlier generation,” she says. Her after-school program is a way for young people to develop their voice (as singers and leaders) and to find role models who aren’t their parents.

While Higginsen surrounds herself with teens, many older adults don’t even run into teenagers unless they live or work with them. In fact, in American society today, people young and old tend to congregate with others of the same age, creating a more and more age-segregated society. But in doing so, they may be missing out on the life-changing experiences, insights, and sense of purpose that intergenerational relationships can bring.

My colleague, Encore.org CEO Marc Freedman, has been working to bring the generations together for the past 30 years. He likes to say that “older and younger people fit together like pieces of a jigsaw puzzle.” I’ve seen this time and again through the work we do supporting efforts to bridge generational divides.

But why do so many of us find meaning and purpose when we form relationships with people of different generations? Researchers are exploring the unique qualities of relationships across different ages, why some of us seek them out, and what we stand to gain when we connect this way.

Higginsen’s work is a way to pass on what she knows and do something that she loves, all while helping young people thrive. Her path illustrates what 20th century psychologist Erik Erikson described as “generativity,” or making a mark by working to make the world a better place for younger generations. Erikson believed that this was key to thriving in middle adulthood (roughly ages 40-65). Often it involves investing directly in young people who will live long after we’re gone.

Research suggests that the more people behave in generative ways, the more purposeful they feel. According to a recent study by Stanford researchers Anne Colby and Bill Damon, passing on life experience to others is one of the ways that Americans over the age of 50 experience “purpose beyond the self”: a long-term goal that’s personally meaningful and contributes to the greater good. This can sometimes take place at work, where seasoned workers who mentor less experienced employees also report a renewed sense of purpose.

Beyond purpose, research shows that older adults who invest in caring for and developing the next generation are three times as likely to be happy in their 70s as those who don’t. According to the Harvard Study of Adult Development, these bonds across generations are key to happiness.

Inspired by your elders

Earlier in life, meaningful relationships with older people can point the way to purpose. In a study of college-age students, researchers identified being influenced by role models as one of three possible routes to finding one’s purpose or life aims.

In a study of nearly 200 college students, for example, students with at least one mentor had a greater sense of purpose in life—and the better their mentoring relationship, the more committed they were to that purpose. Other research found that teen girls who are involved in mentoring relationships engage in more purposeful activities, and in turn have higher self-esteem.

The role model path is something I’ve witnessed time and again, often through cross-generational mentoring.

For example, “Mama Vy” has scores of stories of teens in her program who go on to careers in performing arts or social justice. I’ve also met many younger people who have been drawn to working in the aging or intergenerational space. In nearly every instance, they have a story of a grandparent, teacher, or some other older person who played a big role in their early lives.

Allison Cook is a classic example. When Cook was growing up, her tight-knit family lived close by. All four of her grandparents helped raise her, creating a lifelong love and appreciation for older people.

A high school internship at a nursing home lit Cook up. “I was so happy and excited to go to work each day,” she said. In college, Cook considered becoming an engineer but kept returning to her interest in elders. After her sophomore year, she became certified as a home health aide. Later she volunteered, along with a therapy dog, in a nursing home for retired nuns. “I heard so many powerful stories,” she said. “I really don’t think of it as volunteering. It’s hanging out with my friends.”

One resident who had been scared of dogs her whole life decided to face her fear and pet the dog Cook brought to visit. “That wasn’t so bad!” she told Cook. “At 99, she’s having new experiences,” said Cook. “That’s really inspiring, and what I aspire to.” Now 30, Cook heads Emerging Aging NYC, a group for young leaders in the aging field.

Why we seek out intergenerational connections

These stories got me wondering about why many of us are drawn to these cross-generational connections. So I called Donna Butts, executive director of Generations United, who has dedicated her career to understanding and promoting intergenerational connection. In just about every culture, explained Butts, elders (especially grandmothers) are the keepers of culture, the storytellers who have an obligation to pass down what they know.

“It’s one of the responsibilities people have as they age. The role of an older adult isn’t just being a grandparent. It’s being the neighborhood watch person, the one who passes on values, history, and culture,” she explained. “At the same time, this exchange provides deep roots that are important to young people,” giving them an understanding of the people who came before them.

Many of us discover our callings or seek out relationships sparked by events in our own lives. We may remember an older adult who believed in us, listened to us, or taught us something. Or we may be drawn to someone because they speak to something we missed or long for in our lives.

That’s certainly the case for a neighborhood friend of mine, Clarie Panke, 58. For more than 30 years, Panke has been a neonatal nurse, a specialty she was drawn to from the beginning of her nursing career. “When you enter a neonatal unit, you either cringe or you melt. I melted,” she said.

Meanwhile, for the past 18 years she’s had a second passion—researching later life for her film Light Years, a documentary about three people who embrace aging with positivity and creativity.

Both passions have roots in her personal life. Panke has no children of her own—and wanted them. She acknowledges that there’s both irony and tenderness in her choice to spend her days caring for babies. As for the elders, that’s personal, too. Panke became consumed with older age when her father was diagnosed with dementia, leaving her wondering about her own later years.

“I was motivated by the question, ‘What is it like to be old?’’’ she said. And after talking with dozens of older people, Panke says, “I was surprised by how positive it all was. Whenever someone heard I was doing this project, they told me they had a fascinating, dynamic older person they thought would be great for the film.”

How to find intergenerational connection

Through my work at Encore.org, I’ve been surrounded by people who gravitate toward these cross-generational bonds, both inside and outside traditional family relationships. Sometimes it happens by design, through mentoring programs or other formal arrangements. Other times, it’s more organic.

As someone over 50 without kids of my own, I’ve spent a lot of time thinking about how to be generative, specifically through relationships with younger people. I’ve formed relationships with many younger women through my role as an advisor to Girls Write Now, a mentoring community for young women writers. My work has also introduced me to a cadre of mentors in their 70s who have coached me on everything from navigating tough decisions at work to embracing the challenges and opportunities of aging.

When I reach out to the older or younger people in my life, I feel like someone sees me in ways I can’t fully see myself. Perhaps they are seeing a version of themselves—either who they once were, or who they may become. These relationships bring me joy, but also a sense of purpose—a reminder of what matters in life, how I can help, and how we’re all connected.

This article is part of a GGSC initiative on “Finding Purpose Across the Lifespan,” supported by the John Templeton Foundation. In a series of articles, podcast episodes, and other resources, we’ll be exploring why and how to deepen your sense of purpose at different stages of life.