Sleep is, arguably, the golden ticket to happiness. Our silver bullet to success. A straight shot to both physical and mental health.

I am writing this from the front lines: My 16-year-old stepdaughter’s messy bed. It’s a little after 9 o’clock. Macie is at her desk doing homework, headphones on. She’s studying for a Spanish test and a history test, both tomorrow. She’s thinking she’ll wake up early to do the reading for History. I’m here because she’s asked for support getting to bed earlier. This is awesome, that she’s asked for support. 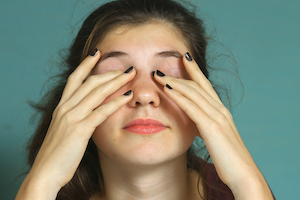 I feel a little useless. I’m so sleepy; at this time I’m usually getting myself ready for bed.

Macie is not sleepy—she’s wired—but she’s exhausted. She’s been up late every night this week, studying. Last night she fell asleep studying around midnight (she thinks); she woke up at 3 am still fully dressed, on top of her covers, with all the lights on. This is not healthy, or good for her studies, mental health, happiness, or athletic performance. She is a junior in high school, and she’s keenly aware that her grades matter a lot for her college applications.

It’s not that I haven’t been nagging all my kids to get more sleep. I’m like a broken record. We’ve got four teenagers—ages 13, 14, 15, and 16—that we’re constantly trying to get to bed at a reasonable hour.

But our constant harping about the importance of sleep is counter-culture in a society where barely sleeping, or “pulling an all-nighter,” is not a sign of terrible time management but instead is something to brag about. Americans hold up the ability to go without sleep as a sign of strength. We say things like “I’ll sleep when I’m dead,” as though our inability and unwillingness to get enough sleep isn’t leading us closer to sickness and death—indeed, the incidence of death from all causes goes up by 15 percent when we sleep five hours (or less) per night. Fifteen percent. That’s a lot. Forty percent of Americans—and 85 percent of teenagers, according to the National Sleep Foundation—live with daily sleep deprivation.

Macie sees her own sleep deprivation as a given. This morning at breakfast she told me that it is “a train that’s left the station.” It’s an inevitable and necessary cost in a culture that prioritizes adolescent achievement over health and happiness.

But here’s the thing: As a family, we absolutely do not prioritize achievement (or success in school) over our children’s mental and physical health, or their happiness. We don’t see Macie’s clear ability to hold up under the stress of sleep deprivation as a sign of strength (the truth is that she is holding up quite well right now). And given that I’ve studied elite performance, happiness, and productivity since before she was born, we certainly don’t see sleep deprivation as a given—we’re clear that she’d do better on all fronts (academically, emotionally, athletically) if she got more sleep.

I believe the train can be stopped. But how?

My instinct is to provide our teens with the facts. If they just knew, for example, that sleep is the ultimate performance enhancer, they’d sleep more before tests. I want to explain all the specific neuroscience, again and again. I want to show them the studies on school and athletic success that point to the benefits of extending sleep well beyond the standard eight hours. Until she’s an adult, the research is clear that she needs nine-plus hours a night to be her happiest, healthiest self.

It is totally normal for teens to take stances on things that are seemingly irrational to us from an intellectual or “economic” perspective, but that make perfect sense to them socially and emotionally. Once we accept this, there are strategies for us to influence our adolescent children that have the potential to be far more effective than laying out a logical, science-based case.

This post is based on a conversation that I had with the brilliant Ron Dahl about raising his own teenagers. Dahl uses techniques from a clinical method called “motivational interviewing,” which has proven effective in motivating behavior change in teens. 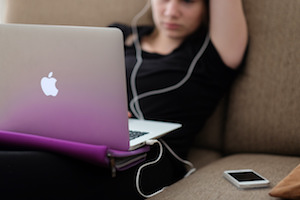 Kids and teens are much more likely to listen to us if they feel understood. Resist the urge to give advice or to “finger-wag”—two things that tend to create defensiveness and resistance to our great ideas. Instead, reflect back to them their position on things.

We need to show our kids, for example, that we understand that everyone in their class is sleep-deprived, especially the ones that seem to be doing the best. We need to show them that we understand how hard it is to fit everything in. It’s hard to balance school and work and friends and volunteering and athletics and the demands of family. We get it; it’s hard. No one is saying this is going to be easy.

We still mandate the bedtimes of our younger teens, and so they need a different type of empathy: It’s hard to have parents who are still enforcing bedtime when so many of their peers are staying up much later (which we know from the activity on their phones). This makes them feel excluded socially, and like they’re being treated like a little kid.

We want to encourage our teens to share with us their innermost motivations. To do this, we can phrase our questions non-judgmentally in ways that will prompt the adolescent to elaborate.

This means we need to set aside a lot of time for this conversation. And time is 90 percent of the issue here. So I’m empathizing with you, dear reader: This isn’t easy.

3. Reflect what they are saying, not what we wish they were saying

This can be a simple restatement:

Adolescent: You say that I have to try to get nine hours of sleep, but I’m totally fine when I get six or seven.
Parent: You’re not sure nine hours is really necessary.

Or, you can reflect what they mean but use different words:

Or, try reflecting what they are feeling:

Adolescent: I’m not tired!
Parent: It makes you angry when you think we are telling you how you feel.

Finally, try amplifying or exaggerating—without sarcasm!—what they are saying if the adolescent is showing signs that they are at least a little bit open to your influence:

Adolescent: I’m really not sure that I need to get more sleep during the week.
Parent: It’s actually fine with you if you occasionally fall asleep in class, or get another cold, or don’t do as well academically or athletically as you could. 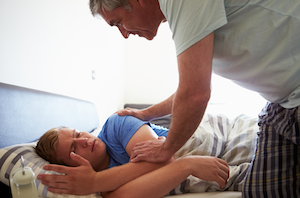 One thing that we can reflect back to our teens, using these strategies, are their conflicting motivations—the inconsistencies between what they say their goals or beliefs are, and their current behavior.

What to say, then, to that teen who wants to do well in school but seems too tired to do her homework well? First, ask her permission to tell her what you see. If she says she’s willing to listen to your perspective, gently point out the discrepancy between what she says she wants and what she’s doing to make that happen in a non-judgmental, factual way:

You really want to raise your GPA, and to do that you’re going to need to improve your grades on tests and quizzes. It seems like you don’t have enough time to work all weekend and get your homework done, and so the last few Sunday nights you’ve started the week so tired that you probably aren’t studying as effectively, or performing as well, as you might otherwise if you weren’t so sleepy at night doing your homework.

5. Support their autonomy and emphasize their personal choice and control

Teens are most likely to change when they recognize the problem themselves, and when they are optimistic about their ability to solve the problem. We can help by expressing our confidence in their abilities, and by emphasizing that we can’t change them—that the choice about whether or not to change is the adolescent’s alone.

Dahl recommends saying something like this: “Whether or not you make any changes in your activities or your behavior is entirely up to you. I definitely would not want you to feel pressured to do anything against your will.”

Say you want your teens to get to bed earlier, or to wake up early enough to eat a good breakfast. It’s normal for adolescents to resist you on these things, especially if they are feeling pushed to do something they are not ready to do—even if they agree with you on some level. For example, they might recognize that they are not doing as well in school as they’d like, but they aren’t ready yet to commit to spending more time in bed and less time Facetiming with their friends at night.

Sometimes (often?) we parents cause kids to dig in their heels when we argue our own position more forcefully. This is like trying to be understood in a foreign country where we don’t speak the language: When we ask a question to a local who doesn’t understand English, we may get frustrated and ask again—but this time louder: “WHERE IS THE TRAIN STATION?” Similarly, with teens, it doesn’t help to make the same argument again, but louder. We’ll just annoy them.

Instead of trying to persuade kids, we need to accept their resistance as normal and try one of the tactics in this list.

7. Side with their negative position

When my kids were toddlers, their dad and I used to laugh at how well “reverse psychology” worked, and if you are particularly skilled (meaning, you can do this without sounding critical or sarcastic) it might work with your teen, too.

For example, your teen might be ranting about how his other parent is really bugging him to get into bed too early. He wants his dad to back off and let him go to bed “when he feels tired.” You could agree with his negative position by saying something like, “Maybe he should just leave you alone, even if it means that he stops caring about your health and well-being, and he stops caring how well you do in school. Yes, you both might be better off if he focused his energy on your sister.”

8. Help them make a behavior plan

If your teen indicates that they are ready to make a change, work with them. Do this only if you suspect that they won’t be able to make a plan on their own, and if they indicate that they would like your help. Have them list:

Have them tell you their vision for their success—how will they (and you) know that they have been successful, or if the plan is working?

All of these techniques take practice. (At least for me. The only thing that seems to come naturally to me is bossiness.) But as with all new skills, these conversations get easier—and we become more effective in influencing our kids—when we practice, practice, practice.

In this posting, I drew heavily on Melanie A. Gold’s and Ronald E. Dahl’s chapter 38 in the anthology Behavioral Treatments for Sleep Disorders (Academic Press, 2010).