Imagine waking up from a deep sleep to find yourself not in bed, but slumped in your hallway nursing a bruised head.

Sleepwalker David K. Randall, a senior reporter at Reuters, recounts this misadventure in his new book, Dreamland: Adventures in the Strange Science of Sleep. Sleepwalking, he explains, is why he set out to discover what all that is known about the science of sleep. It’s also why we have this surprisingly entertaining book to read. 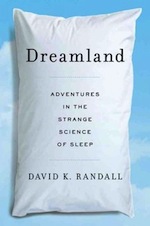 Randall’s journey takes him in many directions. Chapters about dream interpretation, baseball pitchers who nap, and sleepwalkers who’ve committed murder may pique readers’ curiosity; but it’s the science of sleep that truly fascinates.

For example, Randall sheds light on how human innovation—most specifically, the light bulb—has changed the way people sleep. Before artificial light, people slept in two cycles: one, just after the sun set until around midnight, and a second shift that followed a period of wakefulness and lasted until dawn. Apparently, experiments show that when people are deprived of artificial light, they eventually revert to this pattern, suggesting that we evolved to sleep like this and have only recently converted to our present 5-8 consecutive hours per night pattern.

Many studies Randall recounts have relational implications. Couples who sleep in separate beds get more sleep, especially women, because they sleep more lightly than men, who tend to snore and move more during the night. Apparently, separate bedrooms can improve communication, presumably because partners are less grumpy after having a good night’s sleep. However, the verdict is out on whether it’s a good idea for parents to co-sleep with their kids. Instead, what seems most crucial for kids’ healthy sleep is that they get into a bedtime ritual which helps their bodies settle down for the night.

Scientists still don’t know a lot about the role of dreams in our lives, according to Randall, though many believe dreams allow us to rehearse our reactions to random scenarios drawn from our life experiences and imaginations. But experiments clearly show the benefits of a good night’s sleep—people who sleep better demonstrate improved creativity, problem solving, and reaction times under stress. The research of Matthew Walker at the University of California, Berkeley, has shown that sleep is related to brain plasticity or the ability of the brain to form new neural pathways in response to new learning, which may be the mechanism through which other benefits occur.

Many of us have trouble getting to sleep at night to our detriment; so Randall provides scientifically based tips for sleeping better—such as getting exposure to natural sunlight during the day, not drinking alcohol at night, and making sure your bed covers are not overly warm. Some of these he has applied to himself with good results. Still, there is a lot we don’t know about sleep; and though this book provides some information, many of sleep’s mysteries remain unsolved. Unfortunately for Randall, sleepwalking is among them.