My two- and four-year-old boys love to win, whether they are racing their bikes down the sidewalk or just finishing their snack. And this preoccupation with prestige does not seem to diminish with age: Society is full of social hierarchies in which those with high status, from world leaders and prize winners to athletes and movie stars, are the objects of our great admiration. 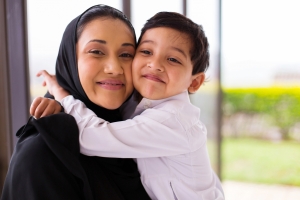 A recent study published in Nature Human Behaviour turned to toddlers to better understand this aspect of human nature. The researchers found that we seem to have an innate preference for high-ranking people—but only if those people aren’t hurtful toward others.

Researchers showed toddlers (aged 21 to 31 months) a scene where two puppets approached one another from opposite sides of a stage and one deferred by bowing to let the other pass. Asked which puppet they preferred, 18 of the 21 toddlers in the experiment reached for the puppet who had been allowed to pass. Because deference from others is a marker of status, this suggests that children have a preference for those with a higher status—even before age three.

However, the results were quite different when two puppets approached one another and one used force to knock the other down before continuing to the other side. In this case, 18 of 22 toddlers reached for the one who was knocked down. As the researchers concluded, “When approaching others, very young children care not only who wins, but also how.”

The researchers pointed out that using force might actually be a sign that one’s status is contested or that the benefits that come from associating with them don’t outweigh the costs. For example, it makes sense to spend time with your boss, networking and skill-building, but it’s not as appealing if that boss is always berating you and your fellow employees.

In addition, when one puppet used force to knock down a wall so that both puppets could get to the other side together, 19 of the 22 toddlers chose the puppet who knocked down the barrier. So it was not the use of force that seemed to displease the toddlers, but specifically the use of force on others.

Previous studies have shown that toddlers are aware of social status, but this study went one step further by demonstrating that they have a distinct preference for high status. Since the participants were so young, this might even be an innate human preference.

“[Adults] may have developed an explicit preference for high-status individuals because they have observed that affiliating with or paying attention to those individuals yields benefits,” the researchers write. Those with high status could help people of all ages learn new skills or access valuable resources.

But infants and toddlers also seem to have some innate preference for kindness and cooperation, which previous research has also demonstrated. For example, young children are less likely to help an adult who has harmful intentions toward another person, and three year olds are more likely to reward those who give to others and punish those who hurt others. Toddlers seem to prefer people who are helpers versus those who are hinderers.

Taken together, this new research suggests that young children appreciate people who do well while at the same time doing good to others. And that’s a combination of qualities that we can all aspire to. When my four-year-old thinks that he has to get his shoes on first, I’ll keep reminding him that helping his brother so they both finish faster is what winning is all about.