When conflicts arise in a relationship, it’s easy to blame our partner. How could he say such a thing to me? Does she really think I have time to run an errand during work? Why didn’t he call to check in? But the slights, annoyances, and forgetfulness that seem clearly blameworthy might be more complicated; in effect, it might be the stress talking—theirs or ours.

According to the American Institute of Stress, more than a quarter of people surveyed in 2014 felt alienated from a friend or family member because of stress, and over half had fought with people close to them. It makes you wonder: How many more of us don’t realize stress is causing our relationship troubles? Research suggests that stress can indeed drive a wedge into romantic relationships—but understanding how this happens may help couples find a way back together. 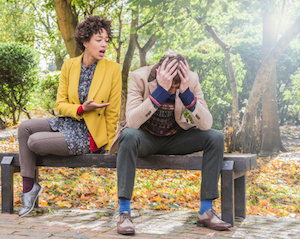 A 2015 study corroborated what those survey respondents believe: Relationships are worse off when people are under stress. Researchers surveyed over 100 heterosexual couples in Switzerland about their stress over the past year, and found that external stress—conflicts with friends, financial problems, long work hours—bled over into their relationships. The more daily hassles participants’ experienced outside the home, the more stress they had in their relationship and the less satisfied they felt with it. Women’s external stress was particularly detrimental, linked not only to their own relationship stress and dissatisfaction but to men’s as well.

How exactly does stress get under the skin of a relationship? One way is when a stressed partner fails to get the support she needs, and thus feels isolated or ignored. If both partners are stressed—as is so often the case when modern couples juggle work schedules and parenthood—this is even more likely to happen.

In a 2015 study of nearly 200 heterosexual couples in Switzerland, stressed partners received less support when their partner was also stressed. Researchers videotaped an eight-minute conversation between each couple after one or both partners had gone through a grueling ordeal—math and public speaking in front of Simon Cowell-esque critics—and noted how much time each partner spent supporting the other. Compared to when they were calm, stressed men and women provided less support: fewer hugs, kind words, and empathic responses. (For men, this breakdown occurred specifically when their stressed partner expressed lots of emotion.)

Thomas Bradbury, one of the study’s coauthors, explains what’s going on with an anecdote. Imagine that he and his wife have both come home from stressful days, he says, and he forgot to run an errand for the family. “She might change her tone with me a bit—amplify her feelings, accuse me of not caring about her and how her day was, of not doing my fair share, and so on. This study shows that this combination—two stressed partners, a female partner engaging the male in [emotional] ways—might be toxic for couples.”

When we don’t get the support we need, we feel alone—and when we confront our partner for not supporting us, they often feel misunderstood; most of the time, it wasn’t their intention to ignore us.

Even if we aren’t stressed ourselves, we might miss opportunities to provide comfort and assistance. A 2015 study videotaped 30 heterosexual couples in their homes over the course of four days, looking for moments when partners supported each other—and found that couples spent only 4 percent of their time together offering support. In this study, another breakdown occurred for women with stressed partners: On days when their husbands had lots of work stress, wives did not increase their support accordingly. Women just weren’t as responsive to their frazzled partners as they could be.

(Here, support included not just kind words and hugs but also help with daily tasks, like washing the dishes or putting the kids to bed. According to researchers, this broader definition of support may account for the somewhat surprising result that, contrary to previous findings, husbands seemed more sensitive to their wives’ distress than vice versa.)

Stress can also wheedle its way into a relationship by keeping partners isolated. In a 2014 study, 87 paramedics—a notoriously burned-out group—and their spouses reported on their stress and how they reacted to it over the course of four days. Stressed-out paramedics were more likely to ruminate, running through negative thoughts over and over again in their minds. When paramedics ruminated, their spouses tended to withdraw—and marital tension mounted.

This study’s authors believe that rumination and withdrawal can be a vicious circle, where one partner starts ruminating, then the other feels neglected and withdraws, which leaves the first partner alone with no distraction from the negative thoughts spinning around in his head. In this unfortunate scenario, stress gets amplified rather than soothed.

How to stay connected under stress

Our instinct might be to keep stress to ourselves, shielding our partner from our problems and grumpiness. We try to stay positive and “leave work at work,” to avoid bringing negativity into love’s safe haven. But that is a mistake.

Not only is it nearly impossible (and detrimental) to keep our emotions under wraps, but we are missing a valuable opportunity for connection and visibility—one that might actually make our partner feel better. In one study out of the University of California, Los Angeles, women either squeezed a stress ball or held their partner’s arm as he received an electric shock. The ones who faced their loved one’s stress head-on, offering comfort instead of focusing on themselves, experienced less neural activity in the amygdala and more activity in the brain’s caregiving and reward systems—and they felt more connected.

In practice, the answer may be as simple as asking for help when we need it. The study that videotaped couples in their homes was able to distinguish between support that was asked for—Can you wash the dishes? or Work was stressful today, I just need to vent—and support that was spontaneously offered. Stressed wives got more support from their spouses not just because husbands (spontaneously) offered it more but also because wives asked for it more.

This points to one way, albeit a vulnerable one, that we can stay connected under stress: When the day gets overwhelming and you feel crushed under your to-do list, don’t be afraid to send up the distress signal. And, if you’re on the receiving end, heed it.

“Support may entail advice-giving or information provision, or it may involve practical hands-on assistance (e.g., cooking dinner, picking someone up from the airport), or it may include emotional comfort and reassurance,” says Shu-Wen Wang, a coauthor of the home-videotaping study. “Couples can improve their relationships by trying to understand the kind of support their partner prefers…and not assume that your definition of what is supportive applies to him or her!”

A 2011 study of more than 100 gay, lesbian, and heterosexual couples showed just how crucial support is under stress. The amount of support participants received from their partner directly related to how satisfied they were with their relationship, and that link became even stronger as stress increased. In other words, for couples who had lots of stress, support had more power to make or break the relationship. In those pivotal moments, when they truly need us, we can prove to our partner that we’ll be there no matter what.

“There is a feeling of union or ‘we-ness’ that comes from coping with stress together with one’s partner that also contributes to bonding and closeness between the partners,” says Virginia Tech professor Mariana Falconier.

Researchers like Kelly McGonigal are beginning to understand that fight-or-flight isn’t the only natural response to stress; we don’t need to get defensive or cut ourselves off from others in the face of difficulty. Instead, stress hormones can also activate our brain systems for caregiving, cooperation, and compassion. The very thing that threatens our connection to our partners can bring us closer together.