Daniela Kaufer is an associate professor at UC Berkeley who studies the biology of stress, examining at the molecular level how the brain responds to anxiety and traumatic events. Her recent findings reveal the difference between good stress and bad stress, as well as pointers for how to respond to stressful events in a healthy way. She was interviewed by health writer Peter Jaret for the Berkeley Wellness newsletter, where this Q&A originally appeared.

Peter Jaret: Most of us think of stress as a bad thing. Can stress be good for you? 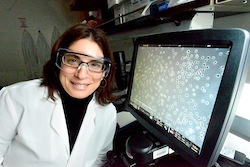 Daniela Kaufer: The prevailing idea in our culture is that stress is bad. People complain about being stressed out. But we’re learning that moderate amounts of stress have powerful benefits. The stress response is designed to help us react when something potentially threatening happens, to help us deal with it and learn from it. Our research shows that moderate, short-lived stress can improve alertness and performance and boost memory.

PJ: How do you measure the effects of stress?

DK: In our work, we study the effects of stress on rats, and we look specifically at the growth of stem cells in a part of the brain called the hippocampus. The hippocampus is involved in the stress response, and it’s also very important for learning and memory. We’ve found that when rats are exposed to moderate stress for a short time—being immobilized for a few hours, for instance—stem cell growth is stimulated, and those cells go on to form neurons, or brain cells. A couple of weeks later, tests show improvements in learning and memory. We’ve shown that the specific cells generated during stress have become activated. But when the animals are exposed to chronic or intense stress—being immobilized for days at a time, for example, or being immobilized and then exposed to the smell of a predator—stem cell growth is suppressed and fewer brain cells are generated.

PJ: What about people? Can manageable amounts of stress boost brain power?

DK: We think the same thing happens in people. Manageable stress increases alertness and performance. And by encouraging the growth of stem cells that become brain cells, stress improves memory. The increase in stem cells and neuron generation makes sense from an adaptive point of view. If an animal encounters a predator and manages to escape, it’s important to remember where and when that encounter happened, to avoid it in the future. If you’re walking down an alley and somebody threatens you, it’s important to remember exactly where you were in order to avoid that alley in the future. The brain is constantly responding to stress. Extreme or chronic stress can have a negative effect. But moderate and short-lived stress—like an upcoming exam or preparing to deliver a speech in public—improves cognitive performance and memory.

PJ: When does too much stress become harmful?

DK: Individuals vary widely in how they respond to stress. The same stressor may be manageable for one person and overwhelming for another, depending in part on perception. People who feel resilient and confident that they can manage stress are much less likely to be overwhelmed by it—and more likely to have a healthy response—than people who think of stress as bad. Another factor is control. Stress is much less likely to be harmful if people have some control over the situation. A tight deadline is stressful but manageable if you have the ability to meet it. If not, if you feel helpless, the stress is more likely to be harmful. Early life experiences also shape how people respond to stress. If you have a lot of stress in your early life, you may be more vulnerable to the harmful effects of stress. Research by Rachel Yehuda, a scientist at the Icahn School of Medicine at Mount Sinai and the James J. Peters Veterans Affairs Medical Center in New York, has shown that Holocaust survivors have increased levels of stress hormones. Her most recent research shows that even offspring of Holocaust survivors have higher stress hormone levels.

PJ: Your work focuses on the effects of stress on the brain. Does stress affect other systems of the body?

DK: Chronic stress can constrict blood vessels and increase the risk of cardiovascular disease. Research shows that too much stress can suppress the immune system. Ours and other research has shown that chronic stress also reduces fertility in animals. In female mice, for instance, stress lowers libido, reduces fertility, and increases the risk of miscarriage. We also know that extreme stress can lead to post traumatic stress disorder, which is an area I’m very interested in. As I’ve said, it’s important to remember threats. But it’s also important to be able to forget them as new experiences come along. Let’s say a man with a long white beard frightens you as a child. It’s healthy to begin to forget that memory as you come to see that men with long white beards aren’t inherently dangerous. The problem with post traumatic stress disorder is that people can’t forget. They can’t let traumatic memories go. The question is why. And we don’t have an answer yet.

PJ: Can you offer any helpful strategies to ensure that stress is beneficial rather than harmful?

DK: If you tend to have a positive attitude—a self-confident sense that you can get through a rough period—you’re more likely to have a healthy response than if you perceive stress as catastrophic. Another powerful factor is social support. If you have friends and family you can turn to during a stressful period, you’re more likely to handle the stress well. Social support buffers stress. That’s something most of us know intuitively. Now we’re beginning to understand it biologically. Researchers have identified a hormone called oxytocin that reduces the stress response. According to psychologist Kelly McGonigal, oxytocin is enhanced by social contact and support.

Another powerful buffer for stress is physical exercise. We see the evidence in animal studies. Rodents that are allowed to run are more likely to create new brain cells in response to stress than sedentary animals. I think the same thing may work for people. People who are active respond better when stress comes along than people who are inactive. Physical activity after a stressful experience also helps moderate the effects of stress.

PJ: What do you do when your own life gets stressful?

DK: I’m not the best role model. I’ll find myself writing grant proposals at one in the morning, totally stressed out. I know what I should do. Before I became a scientist, I trained as a yoga instructor. I know I should take a yoga break. But I guess it helps to know from my research that stress can be beneficial, so at least I have a positive attitude. And that plays a big role in helping people handle stress in a healthy way.