When we first learned last week that an American Army sergeant had massacred 16 Afghan civilians, most of whom were women and children, our thoughts immediately turned to the epidemic of post-traumatic stress disorder (PTSD) among other veterans of Iraq and Afghanistan—and the debate over how to respond to it.

Should we apply the tools of positive psychology to foster resilience in soldiers coping with life on the battlefield? Or does doing so simply justify and perpetuate war?

Articles in today’s and Friday’s New York Times confirm some of our original suspicions about the tragedy: The Army sergeant accused of the killings, Robert Bales, reportedly “snapped” under the stress of his fourth combat tour and conflicts with his wife around his deployment.

While the rampage was horrific, Bales’ story is sadly familiar. Though the estimates vary for PTSD rates among the 2.3 million veterans of the Iraq and Afghanistan wars, mental health experts believe that between 11 and 20 percent of the vets are affected. In his Greater Good essay “Hope on the Battlefield,” Lt. Col. David Grossman argues that this high rate of illness almost certainly arises from soldiers’ innate resistance to violence.

The study of killing by military scientists, historians, and psychologists gives us good reason to feel optimistic about human nature, for it reveals that almost all of us are overwhelmingly reluctant to kill a member of our own species, under just about any circumstance. Yet this understanding has also propelled armies to develop sophisticated methods for overcoming our innate aversion to killing, and, as a result, we have seen a sharp increase in the magnitude and frequency of post-traumatic response among combat veterans.

In response, some psychologists have been trying to develop programs that help protect soldiers from PTSD. One of these programs, Comprehensive Soldier Fitness, was developed in consultation with Martin Seligman, considered the father of positive psychology. The program draws on positive psychology research into emotional awareness and resilience—the ability to bounce back from adversity—to explore how soldiers can preserve their own mental health through the horrors and stresses of war.

Seligman’s work with the Army has caused a lot of controversy, partly because of the no-bid contract he received and the claims that his research from the 1960s helped inform the military’s torture program.

We’ve reported on Seligman’s efforts in the past, and the reaction from some readers echoes another concern, which we’ve heard elsewhere: That programs like this serve mainly to perpetuate war, numbing soldiers to violence in order to make them more effective and durable killers. 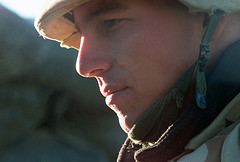 “This effort seems a misplaced, sardonic, and yet sad use of good information,” said one comment on our site. “If we are to introduce coping to the military, why not try to teach loving-kindness to our leaders so that war might be less easily started?”

While we’re sympathetic to those objections, they become harder to swallow in the face of tragedies like the massacre in Afghanistan. American soldiers are human beings exposed to incredibly dangerous and difficult situations, which they confront with loaded weapons. When one of them snaps, the results can be deadly to innocent civilians. Though research on the particular strain of multiple deployments is still inconclusive, the Times reports today that at least one study of 1,200 soldiers and Marines has found that repeated deployments makes troops more likely to experience trauma and mental health problems.

With literally millions of soldiers returning to civilian life now or in the near future, it seems negligent, even reckless, for our government to not try to help these men and women re-adjust to civilian life—not just for the sake of these veterans but for their families and communities. And what more effective way to do so than by drawing on the science of resiliency and the benefits of emotional awareness?

Any effort to develop a program like Comprehensive Soldier Fitness, whether it’s based on positive psychology or not, needs to be studied closely to determine whether it truly offers the benefits it promises. Yet that doesn’t mean we should dismiss the idea out of hand. Nor does it suggest that programs like these, if launched, should make us stop working toward a world without war.

But until that day comes–indeed, to hasten the arrival of that day–we firmly believe we should share the lessons of psychological research with anyone who might benefit, from our military and political leaders to kindergarten students. These strategies may not immediately transform the world as we know it. But if they can bring a modicum of peace and compassion to some pretty dark corners of the world, that’s a start.

I hesitate to be critical about such a thoughtful article, but it seems to me that you are effectively asking the state to make a token gesture towards compassion.

The United States has degenerated into an aggressive military empire. Even if its policy-makers, safe in their offices, decided to allocate sufficient resources to safeguard the mental health of their hired killers (or defenders of liberty, for those living in a dream world), we must never forget the awful price that is paid by the real victims of our aggression. What are we going to do to help the people of Iraq and Afghanistan recover from the emotional injuries we have inflicted upon them? Absolutely nothing, because we tell ourselves that they had it coming and they should be compensating us.

To focus on the needs of American servicemen, however genuine those needs might be, without also addressing the needs of the occupied peoples is an affront to morality, endorsing the view that only “we” matter. And it is precisely that lack of concern for other people that allows us to go to war so easily and so often.