News emerged last week that American personnel inadvertently incinerated copies of the Koran in Afghanistan, which has triggered a violent crisis.

As The New York Times reported, officials were quick to apologize:

“I offer my sincere apologies for any offense this may have caused, to the president of Afghanistan, the government of the Islamic Republic of Afghanistan and, most importantly, to the noble people of Afghanistan,” the NATO commanding general, John R. Allen, said in a statement that was recorded and sent to local television and radio networks here, explaining that the burnings had been unintentional.

Later, President Obama issued his own direct apology to the government of Afghanistan, expressing “sincere apologies” as well as “deep regret for the reported incident.” He reportedly wrote, “The error was inadvertent; I assure you that we will take the appropriate steps to avoid any recurrence, to include holding accountable those responsible.”

These apologies haven’t stopped a wave of riots and assassinations during the past week, a fact picked up on by President Obama’s political opponents. GOP presidential candidate Newt Gingrich argued that the apology should go the other way:

It is an outrage that President Obama is the one apologizing to Afghan President Karzai on the same day two American troops were murdered and four others injured by an Afghan soldier. ... This destructive double standard whereby the United States and its democratic allies refuse to hold accountable leaders who tolerate systematic violence and oppression in their borders must come to an end. 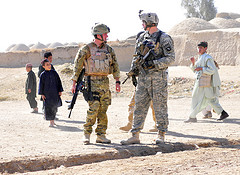 A U.S. and a British soldier in Kandahar province, Afghanistan on Nov. 16, 2010, during the Afghan holiday Eid-al-Qorbon, a celebration of forgiveness, friendship and peace. © 101st CAB, Wings of Destiny

We’ve been here before, of course. In April, a preacher in Florida burned a single Koran and catalyzed a crisis that killed 12 people. And in the darkest days of the war in Iraq, American soldiers were discovered torturing and abusing prisoners in Abu Ghraib. The administration of George W. Bush apologized for those incidents.

But as apology expert Aaron Lazare wrote in an essay for Greater Good, “Making Peace Through Apology,” President Bush’s apology may have done more to hurt than help U.S. efforts to win peace in Iraq.

“I believe there are up to four parts to the structure of an effective apology,” Lazare writes. “These are: acknowledgment of the offense; explanation; expressions of remorse, shame, and humility; and reparation.”

In his analysis, Lazare finds that the Bush administration’s apology for the abuses at Abu Ghraib failed in all four parts, and in doing so aggravated the conflict.

Did the Obama administration do any better in apologizing for the burning of the Korans?

1. Acknowledgment. In emphasizing the accidental nature of the burnings and in using the passive voice (“The error was inadvertent”), the administration appears to be avoiding full acknowledgment of the offense.

3. Expression of Regret. Did President Obama express the appropriate “remorse, shame, and humility,” in Lazare’s words? Without seeing the full text (which was not released to the public), it’s hard to say. But it appears that in this area, the president’s efforts were sincere and heartfelt. President Obama also dramatically improved over President Bush’s apology by making it directly to the government of the offended country, as opposed to a third party.

4. Reparation. What about the fourth part of apology, reparation? The U.S. took a step in the right direction by promising an investigation, but to the best of my knowledge no other reparations have been offered.

As the crisis deepens, it can’t be said that Barack Obama’s administration has handled it much better than how George W. Bush’s administration responded to Abu Ghraib. Moreover, internationally reported statements like the one from Mr. Gingrich have not helped matters.

But, as Lazare points out, “We must keep in mind that it is rare for apologies to be offered and accepted during war. In such times, emotions run high, preserving face and an image of strength are critical, and it is all too easy to demonize the enemy.”

The most effective apologies, he writes, come after the conflict is over, and forgiveness becomes possible:

I have been surprised that most writers and researchers overlook the relationship between forgiveness and apology. Forgiveness is often portrayed as a generous gift bestowed on us by someone we offended or as a gift we unconditionally extend to someone who offended us, regardless of an apology. Yet my own analysis has convinced me that forgiveness and apology are inextricably linked. Indeed, especially after a party has been humiliated, as in the case of Abu Ghraib, apology is a vital, often necessary, step toward assuaging feelings of humiliation, promoting forgiveness, and restoring balance to a relationship.

Gingrich’s stunning inability to be the grown-up in the room nonwithstanding, is it not very different to apologize to an entire nation than it is to an individual? For example, the Lazare article mentioned “meeting the needs” of the victim. What would that be, exactly? I assume anyone in Afghanistan with a sense of reason would accept a sincere explanation that it was an accident.

We’re rather missing the point here, aren’t we? What we should be talking about - as a nation - is our need to apologize to the people of Iraq and Afghanistan for destroying their societies, fomenting fratricidal bloodshed, and leaving them little hope for the future.

This brouhaha about burning holy books - as significant as it might be to Muslims - is similar to the other recent flap about U.S. soldiers urinating on dead bodies. It is entirely the wrong apology, focusing on gestures, symbolism, and appearances. There is something profoundly, pathologically wrong with us when we feel it necessary to apologize for these incidents, but not for ripping apart the bodies of innocent children herding goats near their homes.

As for Gingrich and Romney - he who will “never apologize for the United States of America” - they are beyond the pale. A few weeks living in an Afghan village, wondering if a Predator drone will come for them - and if another one will come shortly thereafter to kill the people who try to put their bodies back together again - might help them understand why an apology is in order. I don’t expect that little thought exercise to feature prominently in too many American churches this Sunday.

Ultimately, we also owe an apology to our children for being so utterly depraved. Will they be able to forgive us, or will they - like us - see nothing wrong with our conduct and continue in the same vein?

One of the challenges of helping Afghanistan is that the majority of its people don’t think like we do.  I imagine most left-leaning readers would disagree, but the country—its history, culture and even geography—is utterly alien to us, and apologies are usually simply seen as evidence of either weakness or deception (or a combination of the two).

I suppose you would also have us believe that Afghan fathers don’t love their sons; that Afghan mothers don’t cry upon beholding the burned limbs of their dead children; and that Afghan bodies have fewer nerve endings and are incapable of perceiving the pain of hot shrapnel piercing their flesh.

In a supreme expression of American arrogance, akin to the attitude of meat-eaters towards animals dismissed as unthinking beasts, you excuse our national crimes on the grounds that our victims are cognitively inferior to us. That may play well at a chest-thumping GOP rally, but it won’t get you through the Pearly Gates.

A nation incapable of perceiving its own double-standards is setting itself up for a hard fall.