We live in a democracy, but many Americans do not vote. Turnout in presidential election years hovers around 60 percent, and it can be much lower otherwise.

What’s going on? Perhaps many voters do not feel informed enough to make decisions. At first glance, it would seem that a little information is all that’s needed, like simply reading up on candidate positions or quickly researching the best way to get to a polling place. 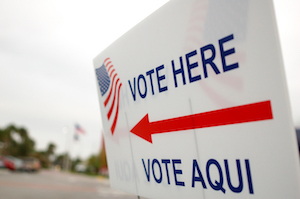 But could there be an emotional obstacle to voting?

If so, we might find answers much earlier in our lives. We’ve long understood that the development of social-emotional skills in early childhood can affect many aspects of our adulthood, from public health and safety to economic mobility to personal happiness. Could “non-cognitive” skills developed in early childhood, like empathy or self-control, predict civic engagement later in life? Specifically, could participation in social-emotional learning (SEL) programs at school lead to more voting after kids turn 18?

That’s what John B. Holbein at Brigham Young University tried to find out. He reviewed a 20-year-old program called Fast Track. Developed in the 1990s, Fast Track was one of the earliest, and largest, programs designed to improve the life outcomes of at-risk children. Almost 900 students were recruited and randomly selected to either participate in the program or become part of a control group.

Fast Track, conducted over the span of a few years, included formal curricula, home visits, parent training groups, tutoring, and peer pairing. Students participated in an instructor-led curriculum called PATHS where they learned important SEL skills like recognizing emotions, self-control, and social problem-solving, and the other program components were designed to reinforce these skills.

Participation in the Fast Track program had just a small effect on cognitive ability. However, compared to the control group, Fast Track students showed positive changes in social and emotional skills like self-control, empathy, and self-efficacy (the sense that they could overcome challenges). Researchers didn’t just see these effects immediately after the program ended. According to follow-up data collected annually for the next two decades, participants kept their social and emotional gains.

In order to understand if there was any relationship between the Fast Track program and political participation, Holbein matched Fast Track participants—now adults—with state voting records. He found that those who participated in Fast Track as children were significantly more likely to vote as adults, compared to those in the control group, by as much as 14 percent.

After considering a number of potential benefits of the Fast Track program that could have influenced political involvement (like increased educational attainment and cognitive skills or decreased participation in crime), Holbein’s statistical models suggested that it was the improvement of psychological and social abilities that had the greatest impact.

Why would that be the case? Those who are able to put themselves “in someone else’s shoes” may be more motivated to mobilize and vote on behalf of others. The ability to self-regulate emotions and behaviors—and display grit or perseverance—may come in handy in the stress of waiting in a three-hour-long line at the polls. In addition, developing these SEL skills can reduce the likelihood of negative life events (like teenage pregnancy or criminal activity), and those who experience events like these are much less likely to vote.

There are many reasons for educators to teach social-emotional skills—and we now might be able to add a healthy democracy to that list. Schools often find challenges to implementing such programs, including the expense of SEL curricula and the limited time they have to devote to non-academic subjects. However, given that democratic participation is a “critical mission” of the public education system, programs like these—that can directly influence political participation—may be well worth the cost.