Religion and science don’t seem like natural partners. One is about taking things on faith. The other involves double-blind proof before making a conclusion. 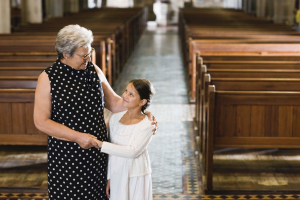 But the gulf doesn’t have to be that wide. Both realms ask similar questions about what matters. The difference is often in order and approach. A belief will often take hold long before it’s been validated. Something like the Golden Rule is a religious tradition, but the scientific benefits of compassion and human connection have since been shown.

This was the intent of two of the Greater Good Science Center’s 16 grantees under the Raising Caring, Courageous Kids initiative. Congregation Adat Reyim, a synagogue in West Springfield, Virginia, and Vibrant Faith, a collection of churches across the country, both wanted to address parenting needs for their members in a practical way that still involved their respective faiths.

One looked at growing compassion, the other fostering character. Both did it with programs that ran over two years and put parents and children in the same room to talk about prevalent issues that are easier to avoid and, through that, hopefully help those parents parent a little better. In doing so, they revealed what cooperation between science and religion can look like.

The program at Congregation Adat Reyim was called Cultivating Compassion in Our Kids and Ourselves. Through 12 workshops, they combined scholars, peer leaders, and breakout sessions to explore issues like balancing compassion with health, with justice, or in the home.

The charge from the beginning was how to educate parents about how to raise good kids, says Shira Solomon, the program’s designer and director. Nothing so dedicated and direct had existed before, especially in a synagogue where there was a particular need.

“It’s the foremost place when parents unconsciously say, ‘This is a crucial part of my raising good kids.’ It’s why most people join a synagogue,” she says.

But like with many places of worship, synagogues aren’t monolithic. Some congregants adhere more to the tenets. Some are more there for the cultural and community aspects, and (as Solomon says) they relate more easily to science than God or faith.

At Adat Reyim, the two groups found common ground in compassion and doing something with it, which is tied to the Jewish concept of tikkun olam, or to repair the world.

Research has shown the mental health benefits to showing compassion. There are similar benefits associated with sympathy and empathy, which are closely related to compassion. Sympathy is recognizing someone else’s misfortune. Empathy is being able to feel similarly to others, which can motivate you to act. That’s when compassion comes online. With compassion, “you’re part of the agenda,” says Elias, who was Adat Reyim’s scientific advisor. “When we do something constructive, we feel good about it.”

Compassion isn’t a given. Some people might have an affinity for it. For others, it’s not an instinct, but it’s a skill that can be learned and improved upon. The program aimed for involving all parents, most specifically dads, who usually aren’t the targets for such things. Parents didn’t have to attend all the sessions together, but they both had to come to at least some of them. The kids had to come along, too.

In this way, the whole family could develop the skill together. They could all participate in discussions, and the kids could see the parents modeling both learning and compassion. “You have to build from the inside out,” Elias says, and create a new pathway and norm. That’s initially difficult but, once it’s there, “It’s easier for people to follow them.”

More specifically it’s easier for parents to encourage their kids to do it. It becomes reciprocal, and while it sounds like a ripple effect, he says that it’s actually the opposite as the waves becomes stronger as they go out.

One person might notice a wrong, feel compassion, and want to do something, but won’t because there isn’t group support. By involving people, a new standard is activated. There are parallels in bullying literature, Elias says, with the idea of seeing the behavior and coming to the aid of another. “It’s the difference between being a upstander and a bystander,” he says. The fact that everyone is together bolsters the process, but it also needs to be bigger than individuals acting on their own.

“When we create a culture and climate when compassion is valued, the threshold for action is lower,” Elias says. “That maps into the whole idea of a congregation.”

The other part is that individuals on their own rarely do all things well, but a group brings collective wisdom, since it’s likely someone will have a skill that another may lack. “When parents share, they’re each likely to be more effective because they will learn from other,” he says. “No one person is the perfect parent, but everyone together can make the perfect parent.”

Vibrant Faith launched the program Keep Connected as an effort to build character in young kids. This quality was seen as fundamental because it’s “the internal compass that shapes who you are. It isn’t something you teach cognitively. It’s something you embody and live out,” says Gene Roehlkepartain of the Search Institute, which partnered with Vibrant Faith.

He created the original program, based on the scientific benefit of establishing relationships. It built on five key elements: expressing care, challenging growth, providing support, sharing power, and expanding possibilities.

It was a secular program, and Nancy S. Going, director of research and resource development at Vibrant Faith, says that it could stand on its own and be done in any setting. But since the setting in this case was churches, part of the connection had to be to God.

Biblical stories that related to each of the five key elements were added to “faith it up,” she says, but the focus over the six-week curriculum was also to strengthen the relationships between parents and children. As child development researchers have noted, attachment starts on day one, and if it starts strong, it’s easier to maintain. Even so, attachment will shift over time and so it needs to be reinforced. “It’s not as static as it was once thought,” Roehlkepartain says.

What was slightly different with this parenting program, Roehlkepartain says, is that the focus was on kids in middle school. Every age brings changes and, for parents, a realization that their children are becoming more independent. But the adolescent years are a particularly significant time of transition. Kids are identifying more with their peers. They’re more mobile and exploring the outside world, and that’s exciting, as Roehlkepartain says.

It also can come with the implicit or explicit message to parents that kids want to be left alone—and parents might do what they’re told in the belief that kids need their space. They well could, and you might have to drop them off two blocks from school and not kiss them goodbye, but teens still want you to be home and accessible later for whatever questions they have. “You need to renegotiate your relationship,” he says.

The challenge is that by this age, parents might not have as much of a community in which to discuss these challenges as they do when kids are younger. “Society isn’t set up for it,” Roehlkepartain says.

Vibrant Faith helped by first putting parents and kids in a room together and allowing them to talk about struggles, with one of them being power-sharing. Kids believe that they can do more than they’re being allowed; parents are hesitant to let them. Often, the kids are right—they can do more, but they still need parents to help them. The discussions, Going says, helped ease that shift, because underlying it was making sure there’s that secure base to which children can come back. The collaborative approach helps that, Roehlkepartain says.

And as with Adat Reyim, parents get to hear from one another. While all aren’t of one mind, they do share a faith and a community. “There’s a trust with someone sitting right next to you and being in the same shoes,” he says. “People can be more receptive to an idea if it resonates.”

At the least, they can realize that their frustrations and worries over loss or lack of control aren’t so singular. Parents might have come out of the program with a framework for the next four or five years, but the act of talking and dealing with what’s actually happening can be just as significant to ease the stress. As Nancy Going says, “It’s eliminating the silence.”