My sister and I sat in my mother’s bedroom—her sanctuary and prison, where cancer had kept her confined on and off for the past six years—as she looked out the window longingly. The stunningly sunny July day reminded her of everything she loved doing outdoors: tending to her roses, smelling strangers’ babies’ heads, cheering for her children on the cross-country course.

She was getting cranky. Hindered by dry lips but motivated by restless legs, she pleaded in her best Jewish grandmother voice. “You guys have gotta get me out of here,” she said, smiling coyly. “I’m dyin’ in here…” 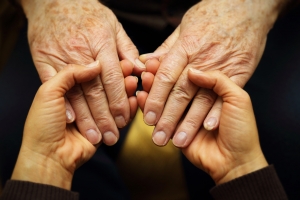 My sister and I exchanged a skeptical glance as we looked at the tubes and machinery she was connected to, the bag of nutrients that was keeping her alive, and considered the implausibility of any excursion. Though mom clocked in at 5’2” and under 100 pounds, we knew a battle was fruitless; when she set her mind to an idea, we had no chance of stopping her.

A self-identified flower child who read Pema Chodron and Thich Nhat Hanh, my mother fought two forms of cancer over 16 years before her death. The disease took her hair, breasts, ovaries, fallopian tubes, and uterus, along with a third of her intestines. But her humanity grew. Following her first diagnosis when I was three, she and her closest friends championed a non-profit called Healing Odyssey, a women’s retreat for cancer survivors.

As odd as it may seem, I am a more grateful person today as a result of losing my mother. As I watched her fight with her everything to stay on this planet—to spend another day with my father, the love of her life, and to support my sister and me through our trials and triumphs—I began to value my life more.

Of course, I had moments when I raged at the top of my lungs at cancer, and I’ll never forget when the man from the morgue wheeled her body out of our house for the last time. But my appreciation for life also grew undeniably—and it led me to conduct research that would eventually explore how the death of a parent can inspire gratitude.

Nine years following my mother’s death, I was studying loss, childhood trauma, and resilience for my doctorate (they call research “me-search,” after all). I began wondering whether the experience of gratitude growing through loss might be universal. Early on, I came across a study that showed that our sense of gratitude can increase when we reflect in a personal way on our own death.

The authors of this study attributed the phenomenon to the “scarcity heuristic,” whereby we value things more when they are rare or scarce. So when we’re faced with death, the value we place on life rises. This was my experience. In witnessing my mom die at 53, suddenly life felt very short, and each moment became incredibly important.

I was excited to see my experience mirrored back to me in research, and inspired to study whether losing a parent in childhood made people more grateful. As a starting point, Katie McGovern and I asked 350 adults who had lost a parent about their gratitude, depression, psychological well-being, and post-traumatic growth (positive change experienced following a major personal crisis or traumatic experience), as well as how their gratitude changed as a result of the loss.

Unsurprisingly, we found that those who rated themselves higher in gratitude reported lower levels of depression, and greater levels of psychological well-being and post-traumatic growth. In other words, the more grateful participants were faring better than those who were less grateful.

Because this study was correlational, questions still remain regarding whether adults actually developed gratitude because of the loss or were already grateful people beforehand. Also, it may have been difficult for people to accurately remember their gratitude levels prior to the loss. As such, we could only speak to their perceptions of changes in gratitude. Stronger evidence would come from a long-term study that observes how gratitude changes in children before and after losing a parent, compared to children who don’t lose a parent.

Still, a large majority of the adults in the study felt as I did—that losing their parent made them a more grateful person. In order to understand this in a more nuanced way, we invited people to write about their experience and analyzed the responses. The most common themes that people reported were related to realizations that life is precious, feelings of gratitude for family and friends, and a recognition of impermanence.

I was particularly moved by a quote from one woman in the study. “Losing my mother reminds me daily how precious life is and that I shouldn’t take a single second for granted,” she said. “From darkness I eventually came into the light.”

When gratitude is hard

My mother was a wonderful, thoughtful person who tried as hard as she could to make hers a “good death.” She joked about mortality and signed notes to us with “I love you eternally,” part of a broad campaign to prepare my family for her death. She wrote letters to my sister and me to be opened on our wedding days, and she recorded herself on a Walkman reading our favorite childhood stories so she could read to her grandbabies. As painful as it was to see my mother suffer over multiple years, we were given the gift of time. We held each other and laughed and cried together as much as we possibly could have in that period between diagnosis and death.

When I entered into my research about loss and gratitude, I wanted to acknowledge that not everyone who had lost a parent had experienced a “good death” as we had. They may not have had a parent who was so conscientious about preparing them for their death, a close relationship with the parent, or the opportunity to say goodbye. I didn’t want the research to paint an unrealistically rosy picture or minimize the incredible pain that comes with loss. And the last thing I wanted was for those who were grieving to feel like they should be feeling grateful.

As a result, we also studied why it was challenging for some of the participants to access gratitude following the loss of a parent. We found, unsurprisingly, that those who experienced additional traumatic events in adulthood were struggling more. When people believed their gratitude decreased following the loss, they tended to attribute it to fear, anxiety, and a feeling that they couldn’t depend on others.

I most certainly do not feel grateful every day. I become angry every Mother’s Day, and embarrassed about the envy I feel toward the beautiful connection my best friend has with her one-year-old son. In every accomplishment or milestone I achieve, there is a tinge of melancholy—it serves as a reminder that the world has continued spinning without my mom in it.

In living with this incredible burden and gift of parental loss, no feelings are simple or singular. In the overwhelming wave of sadness I feel envelop my heart when I smell her perfume on a stranger or wake up from a dream in which she visits me, there is also a deep achy joy in feeling connected to her. This is the gift of grief: an opening to the complexity of moment-to-moment experience, which, for me, inevitably gives way to gratitude.

On that July day, we carefully guided mom into the passenger seat of her yellow Volkswagen Beatle and drove to an overlook in Laguna Beach. Left arm clasped to mine and right arm clasped to my sister’s, my mother shuffled down the pathway leading to the water. With a halt, she pointed out a crop of angel-wing jasmine. “You guys have to smell these,” she coaxed, with that same look she would have in front of a piece of chocolate cake—eyes wide, guilty of an indulgence. I watched her as she closed her eyes, dipping her face into the small, star-shaped flowers and drinking in their scent as if they were a life force.

We continued down the path toward the edge of a cliff—a meeting place between two worlds—and pressed against the railing. The three of us stood, hand in hand, and our eyes softly closed as the sun warmed our skin. For the first time in the six years since she was diagnosed with ovarian cancer, our shoulders released. We breathed fully and calm swept over us.

“This is where spirituality lies,” my mother said, with the surety of a new discovery. Staring death in the face and marveling at the supreme beauty of the universe, something in her had shifted. Her mama-bear stubbornness, her moments of confusion, anger, and sadness, were replaced by a calm acceptance. And my sister and I followed her lead.

Mom took us to the edge that day with her, to confront our own deaths as well as hers. In moments like this, what truly matters quickly shifts into focus; it becomes glaringly obvious that our time here is so finite and death can come at any moment. As the sea salt mist caressed our faces, we held each other tightly, in preparation for letting go.

A version of this article was originally published on Elephant Journal. Read the original article.