In recent years, organizations such as corporations and sports teams have made an effort to give back to their communities. Sometimes these efforts are criticized as merely marketing strategies, as opposed to genuine altruism, and other times they are warmly embraced. What sorts of effects might they really have?

A recent paper published in the Journal of Consumer Behavior suggests one answer to this question: Seeing an organization donate to charity may cause individuals to want to donate as well. 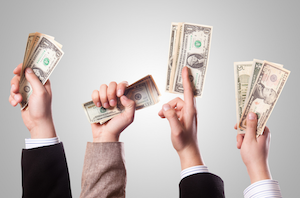 Past research has suggested that, when we are the beneficiaries of kind acts by others, we are often motivated to “pay it forward.” For example, when participants are helped during an experiment, they experience gratitude and are then more likely to help out someone else in return. However, less research has looked at what happens when we see a company or organization act in a charitable way. If an organization donates to a charity you care about, will you still experience gratitude? And will this motivate you to want to help out the charity as well?

In the study, 201 participants read about a hypothetical scenario in which their local football team decided to donate to a charity. Half of the participants read that the team had decided to donate 1 percent of its ticket sales and merchandise revenue, while the other half read that the team had agreed to make a much larger donation of 5 percent.

The researchers found that, when participants felt more grateful for their team’s donation, they also were more likely to want to donate to the charity themselves.

When did the participants feel more grateful? The more strongly they identified with their team, the more gratitude they felt—especially when the team donated five percent of its proceeds (compared to one percent). In other words, organizational generosity seems to inspire individual generosity—and this is especially likely when people feel connected to the organization and the organization gives more.

This new study helps to explain why we’re likely to want to “pay it forward” when we witness good deeds by another person or organization: gratitude. Even though the participants in this study didn’t directly benefit from the organization’s charitable giving, they may have felt grateful because they saw the organization as supporting their moral values. In other words, simply reading about a group that you care about doing something generous may be enough to inspire gratitude and altruism.

How can organizations ensure that their charitable giving efforts have the greatest impact?

According to Professor Dae Hee Kwak, lead author of the paper, partnerships between organizations and charities are most likely to inspire more giving when they are transparent (so that consumers can see exactly how the charity is benefiting), and when individuals feel a connection to both the organization and the charity.

Charitable giving has been found to benefit our health and happiness. So if companies or organizations inspire their members to donate to charity, their members may improve their own health and well-being as well. In other words, organizational donations can have a positive effect—both on the charity receiving donations and on the members of the organization who may be prompted to donate.