Past research has shown that when we spend money on others, we actually experience greater well-being than if we were to spend that money on ourselves. Could something as simple as buying a friend dinner or donating to charity improve our health, too—and if so, how? 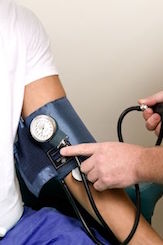 According to a paper published this February in the journal Health Psychology, it can—and one way it works is by lowering blood pressure.

In an initial study, researchers looked at the relationship between giving money to others (or “prosocial spending”) and blood pressure, a simple measure of cardiovascular health. One hundred eighty-six adults who had been diagnosed with high blood pressure were asked to indicate how much money they spent on charities and other causes, and then followed up with two years later. By then, the participants who had initially spent the most on causes had lower blood pressure than participants who had spent less money. This association held even after accounting for the effects of income, education level, and age.

Why does prosocial spending have these benefits? One possibility is that it increases how socially connected we feel. Feeling closer to the people we help can enhance our relationships with others, which have a large impact on our health.

Ashley Whillans, doctoral candidate at the University of British Columbia and lead author of the paper, says that prosocial spending may also work to reduce the negative health effects of stress. According to Whillans, future research on prosocial spending and health could investigate whether “helping others protects us from the stresses and strains of our day-to-day lives.”

How to maximize the health benefits of giving

If you are looking to spend money on others, researchers have found several ways to make sure that you get the greatest benefit from your spending.

Whillans reports that participants appeared to benefit most when they chose to spend money on people they were close to. This accords with past research suggesting that spending money on others benefits our well-being most when it makes us feel more socially connected.

Additionally, giving seems to be best for us when we freely choose to help: When we feel pressured, we’re not likely to experience the same psychological benefits. Whillans and her co-authors point out that feeling burdened can undermine cardiovascular health, so helping others may not be as beneficial if we feel pressured to do so.

When we give our money and time to others, research suggests, we end up gaining something as a result: We experience increases in health and well-being. In particular, giving to others may help strengthen our relationships and foster resilience in the face of stress. Even giving small amounts of money can be beneficial, Whillans reminds us: “It is possible to maximize the happiness and health benefits of every dollar.”